Top three most popular dogs by US State

I don’t see that many Labs around, and German Shepherds hardly ever. Maybe because I’m in a city, the most common dogs here by far are pit bulls (more accurately, pit bull types; several breeds are similar enough to be informally counted as such even though they’re not Staffordshire Terriers.) I’d be interested to see a more granular breakdown than “Lab, Shep, Golden or maybe Bulldog, for pretty much the whole country.”

Pyr is smart and keeps coyotes away. I live in a neighborhood that used to be surrounded by woods. Now that it’s surrounded by shopping centers the coyotes spend more time in backyards. I’m grateful to have a neighbor with a Great Pyrenees.

The data is garbage. Apparently it’s only checking AKC registrations, and the AKC doesn’t handle the registrations for Pit Bulls, Border Collies, or many other dogs, and AKC popularity is hardly representative of overall popularity.

Also, the AKC is a garbage organization.

The data is garbage.

But the graphic is cute! Who cares about the data?

Had Pyrs growing up. Amazing dogs. I remember one chasing my school bus through three foot snowdrifts.

Our dog looks like a lab, but she’s a lab/terrier (probably pit bull) mutt rescued from the shelter. The overwhelming majority of dogs I see here are mixed breed, often lab-terrier.

Damn, there are a HELL of a lot of beat-up, yappy, small-breed dogs up for adoption. I also see a lot of them being walked. I suspect there are a lot of totally-off-the-AKC-radar dogs out there and, yeah, these stats don’t mean a lot.

Also, a lot of messed-up pit bulls out there for adoption. To be fair, there were a few pitts out there today that looked totally sweet, made eye contact, and gave winning doggy grins to visitors.

An OHS clerk saw me moping around. We chatted and confirmed my hunch: Shepherd dogs, even tempremental ones, get snapped up like that. I missed out on two good and one borderline prospects today.

Ohhh, Kira. It’s going to be hard finding a dog anywhere near as good as you: 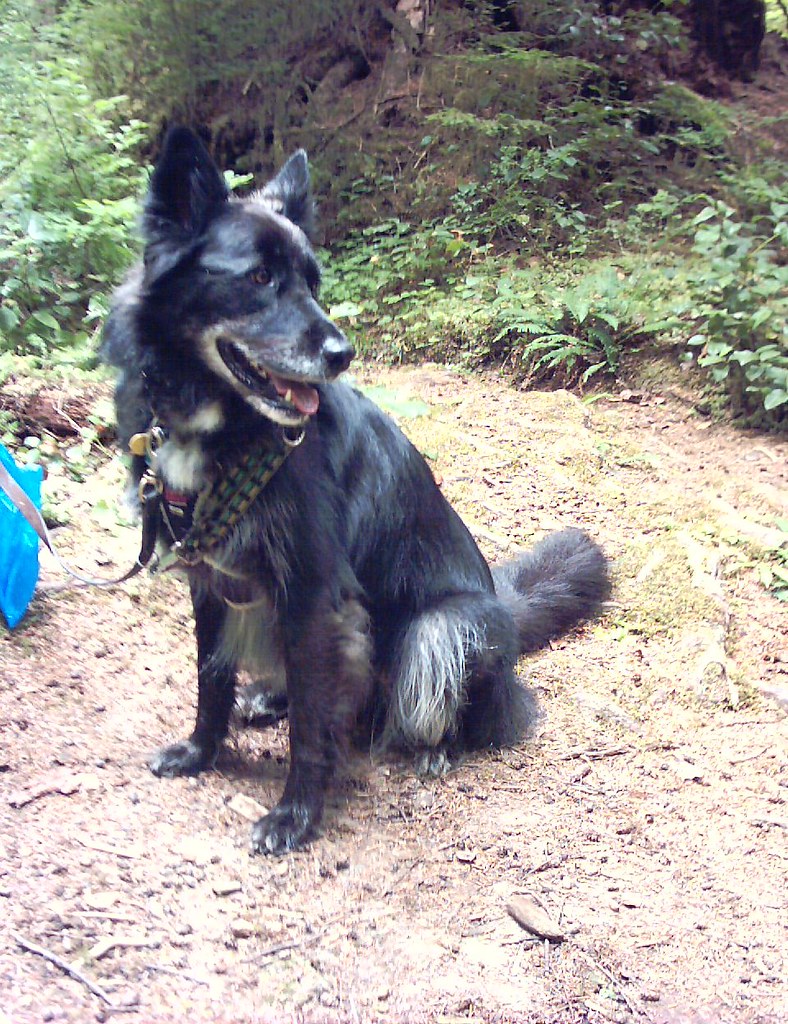 *Kira is actually a mutt. Belgian Sheepdog and, as I told people who asked, American Fence Jumper.

So where does the mutt fit in to this graph? That’s always been my general preference.

Also, the AKC is a garbage organization.

Strewth. Jason, the less popular your favorite breed of dog is with the AKC, the better chance the bloodline has of producing healthy pups with a much shorter list of genetic disasters in the making.

I’m pretty sure they’re #1, but the AKC only looks at purebreds.

My yellow lab is everywhere, too. In the kitchen grabbing cake off the counter, running out the door with my pants, in the bedroom eating my glasses, on the couch chewing the TV remote… Of course at the end of the day I tell him what a smart, handsome boy he is.

Yeah, I like to think of my old lab as a kind of advanced sentient vacuum cleaner who loves me.

Flickr says those photos were on Whidbey Island. We could’ve met up! I could’ve been on the ferry there in five minutes

Don’t get me wrong here, I love my dog, he’s a family member, and being a lab and 13 years old, I’ve been thinking a lot about how his end of life will work out. It’s very painful for me, and I’m actually perversely hoping that he may have some kind of crisis during my work hours (I work 4pm-1am, and that’s when the house is occupied by my family), and that nature might take him away and I won’t know until my mom or brother informs me in the morning (the dog sleeps in my parent’s closed off room and I don’t see him till I get up at noon).

On the other hand, if he starts showing pain that I can recognize and it’s something bad enough that I can’t make him comfortable while also knowing he’s happy and knows who me and the family are, then I’d like to go to the vet and give him his ultimate freedom from pain myself. If it’s going to be that way, I want to be the one with the needle injecting him, not because I don’t trust vets (I do, they have many years of experience, I don’t have years of this type of work), but because I want to bear the responsibility and I want to be the one with all the decision-making power in the situation. I don’t want to feel like I’ve asked someone else to “do my dirty work”, I want to be responsible for it, even if I regret it. I’d rather live with the regret of making a decision and taking action myself, than regret asking someone else to do it for me out of my own cowardice. I’ve given my old boy many injections, both subdermally (the back of the neck shot), and into his vein (at his wrist/forearm) for morphine when he broke one of his legs as a puppy.

(I’m choking up right now) And I know that it’s going to end soon, and it hurts me so much. He’s on oral cortisone, and I’m rejecting the animal medical center’s offers of acupuncture and “Light Therapy” and therapeutic touch and homeopathic remedies and their steadfast insistence on giving him an MRI even though we already know with certainty that he’s suffering from a proprioception deficit caused by a bulging vertebral disk that can’t be fixed surgically and even if they tried to fix it. The surgery would almost certainly leave him both more crippled than he already is, and in constant, extreme, intractable pain for the rest of his life, rather than the very short episodes of confusion he experiences when his hind-end collapses in what appears to be painless weakness. There’s just so little I can do for him, besides giving him affection, and gentle play and twice daily opioids and a weekly shot of Glycosaminoglycans that keep his geriatric joints properly lubed up.

I’m sorry for spilling my guts here, yet again. I just am having a very hard time coping with the fact that my boy, my dog, who I raised from a puppy is going to die, probably within the next 6 months to a year, and that I’ll need to help him die, if I’m in any way a moral and merciful human. What can I tell myself? There is no god, he’s not going to a better place. But I’m afraid I’ll make the wrong decision and end his life when he’s still happy and willing to be with us. I’m afraid that I won’t be ending his suffering but instead ending his enjoyment of the people he loves.

I don’t expect anyone here to know what to say or be able to console me. I just need a place to say this. A place to say that my dog was a good boy while he lived and that it hurts so much knowing that he’ll be gone in practically no time at all, and that I’m not going to let someone else be responsible for it.

[quote=“LDoBe, post:19, topic:58174”]
I’m actually perversely hoping that he may have some kind of crisis during my work hours (I work 4pm-1am, and that’s when the house is occupied by my family), and that nature might take him away and I won’t know until my mom or brother informs me in the morning[/quote]
I was in the exact some position four weeks ago, when Kira started to get ill. “Good girl! I hope you pass quietly in the night.”

When her lymphoma came back, it came back hard, and there was absolutely no choice in the matter, and that made it easy. One hour from finding her unable to move her hind legs to driving home without a dog.