And they want to track him down and fine him!

Be on the lookout for a man with a fine cloud of mist around his head that makes him look blurry when everyone else is in focus.

Not surprised in the least.

I’ve been in some caves around the city of Guilin and it’s not uncommon to see broken stalagmites, pried out fossils and carvings on the walls. Historically the caves around that area have been used as shelters and or homes in recent times and the sacred approach to natural formations that westerners have is not so much a thing for most there.

Same with the Carlsbad caverns, where they had to close the King and Queen rooms to general viewing because most of the close-by features were being lost in the 80s to tourists breaking them.

Stalagmites take a long time to form, but not that long. A 10 million year old stalagmite would be about 100 meters tall. It’s probably several thousand years old. But that doesn’t make this guy any less of an a hole.

I watched that video. The stumpy little thing the guy obnoxiously kicked over looks to be on the smooth, paved pathway. Maybe the guy didn’t think it was part of the natural cavernscape. (I just invented that word, and I couldn’t be prouder.)

But it was coming right at him!
He had to stand his ground!

Annoying stalagmite! That will learn it.

"This will take a while, which sucks, because I'm already so busy chiseling out igneous intrusions from rock formations and watching Youtube loops of the Superman fault-sealing scene over and over."

Condolences to the stalactite. It must have been traumatic to watch that happen to someone you planned to start a column with one day.

At least he has a future as a Scout Leader… 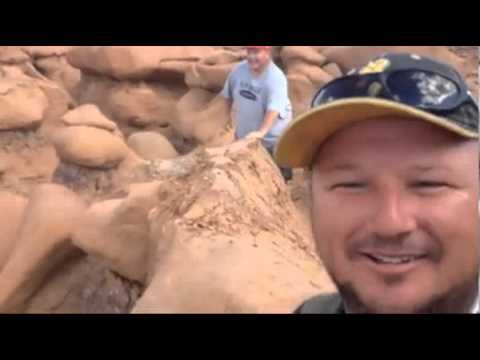 … acquired by decades of education and lectures. And there are still western idiots that wreck rock formations or vandalize springs.

It was worse a hundred years ago. My wife and I once visited the Barbarossa Cave. https://en.m.wikipedia.org/wiki/Barbarossa_Cave

It’s not in the article, but we were shown the effects of large scale tampering about a hundred years ago, when visitors would break off gypsum flakes just for kicks and people redocorating the cave to make it more dramatic.

I love caves, but too many people just see things like that as something to knock down. Just like a tower of blocks or Lego. Breaking stuff is fun, and really, any rock takes millions of years to make. So they don’t see what the big deal is. Like breaking glass bottles.

Wait, you were serious?

The adult Boy Scout members linked with vandalizing a 200-million-year-old rock formation at Goblin Valley State Park in Utah have been removed from their leadership positions within the scouting organization and are no longer members of the Boy...

ETA: I see @GulliverFoyle beat me to posting about these guys, though.

Ideal punishment: Give him a bucket and an eyedropper and let him drip water until he re-forms a stalagmite the size of the one he kicked over.

Any time something like this happens, I ask myself if having easy public access to these amazing natural formations is worth it. The road network that brings cars in, the taxpayer funded saleries of the park rangers and bureacrats who administer these places, all of this seems like a bargain until an ugly american comes on tbe scene and does their thing.

I sort of wish the TSA could pull back on its bizzare overactively imagined danger passion play, and some of that mojo could go into preservation of things like stalactites and stalagmites.

Oh good. It’s not just Muricans who are assholes.

Wouldn’t that depend on how live the cave was? If it’s dry most of the time, and only drips during a monsoon of the century, it could be much slower to form.