Trump fan Omarosa: "Every Critic, Every Detractor, Will Have to Bow Down to President Trump’

This has clearly been edited. The original quote identifies Trump as “king”.

Thinking back, I remember that the mainstream media had no problem presenting Omarosa as a troubled, unstable, narcissistic blowhard back when her path first crossed the Lying Cheeto’s.

My, how times have changed. Guess this is the post-racial society we’ve been told about.

“In the universe”? Yeah right. My hope is that there’s a burly space creature out there somewhere just waiting to kick Trump in the ass.

He was very jovulent? Jovulent? Is that what she said? ETA: Obama started it?!? Is this really the way people think?

I’m pretty sure that this is on the Evil Overlord List on things “not to do”.

Heck, for some well-needed laughs…

Inspired by this: https://bbs.boingboing.net/t/trump-fan-omarosa-every-critic-every-detractor-will-have-to-bow-down-to-president-trump/86030 I’m pretty sure forcing your enemies to bow down before you is a violation of the Evil Overlord’s List, and declaring your leader to be “the most powerful man in the universe” is likewise a violation. So, for shits and giggles, and some well-needed laughs: What other violations of either the Evil Overlord’s List or the Law of Narrative Causality have we…

Any known detractor ‘bowing’ to Trump is likely preparing for a rush. Those in his Secret Service detail probably already suspect this.

I will heed my king’s words on this one…

the most powerful man in the universe

Bit of a stretch that isn’t it? I don’t think the president is even the most powerful man in America.

Is “jovulent” the new “irregardless”? People say it and we know that they’re wrong but we know what they intend (“jovial,” with a hint of “jubilant”)?

Gee, though, according to the Grammar Nazi thread a few days ago, we shouldn’t get upset none. We should just lie back and be jovulent.

That’s because Donald Trump is the queen of putrescence.

I don’t think “jovulent” is a cromulent word…

That was also the night before the raid that killed Osama Bin Laden, and at the time he was roasting Trump he had already given the order to go ahead with the raid.

It’s arguable that Obama destroyed OBL and the GOP in the same night.

Omarosa is a Trump supporter. And when she foresees a President Trump vindictively using his position to settle old scores-- she’s apparently relishing this idea.

Us Conservative value America and Freedom and America too much to let you people have any.

I remember another outsider candidate who ran on a similar platform back in the 80s. 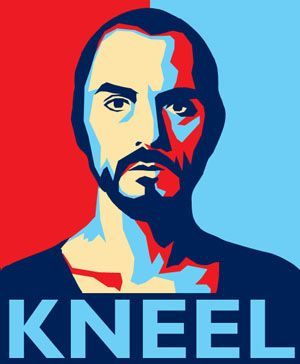 I cant be the only one reminded of “head like a hole” https://www.youtube.com/watch?v=ao-Sahfy7Hg

In this country, we don’t bow down to anyone, President or not. Maybe your greatest dream is to have a tyrannical asshole dictator instead of a president, but I’m pretty sure most US citizens don’t share your misguided fantasy.