The “Comb Over” foreign policy will go over big.

Has the word “viable” lost all meaning?

If anything, it’ll make the race more entertaining

Nothing about this race is entertaining. With the current crop of candidates, they’re all pretty much disasters. Honestly I would vote for Trump on the (likely very wrong) theory that his inaugural address will be, “Seriously? Man, you people suck. I’m fired!”

Unfortunately it also could make many of the other yahoos running look entirely reasonable.

That’s the real danger of nutjobs like Trump. Not that he has any chance of winning—even mainstream Republicans think he’s an assclown—but that he helps change the perception of what a “centrist” looks like.

In current 'murrican polictics, sadly yes. Doubly so for the nutbar faction of the Republicans. 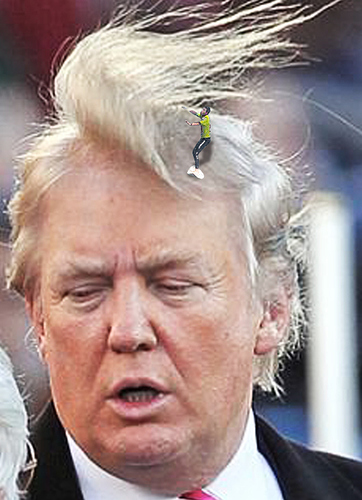 That was my theory about all of Romney’s primary opponents last cycle, they are all so looneytoons that the base will go for the Mormon.

But even then they picked the wrong Mormon.

Unless he’s recently taken a crash course on evangelical dog-whistling, I doubt he’d make it past Iowa.

[quote=“paxsimius, post:3, topic:53873”]If anything, it’ll make the race more entertaining.[/quote]I think I’m weary of entertaining races. Wouldn’t it be a nice change if all the candidates were boring, serious people who never talked about binders full of women or forgetting Poland and who didn’t scream or offer bets during televised debates or quote the Pokemon movie and so on? It’s not like they’ll be providing material for John Stewart anymore (sigh).

By the way, is it not a truth universally acknowledged at this point that linking to the Mail is doubleplus ungood?

Oh thank God. I was afraid the GOP wouldn’t be able to find a good candidate.

Why can’t he just go away? Every time I hear him speak, I throw up a little.

The point of that whole primary circus, from Trump’s opening clown act to the end, was to convince the right-wing Republicans that they were going to have to support a corporatist-machine candidate, not one of their own ideologues. Romney had the machine slot locked up (as well as the billionaire Mormon ex-governor slot), and Huntsman was clearly too independent to play ball with the machine, so he also wasn’t acceptable, even though by the end, Romney had been caught making the “47%” sorts of comments that doomed his already-unlikely candidacy.

“Fuckface Von Clownstick 2016: This time I mean it for real this time.”

“wait, maybe it would lead to a cool cyberpunk post apocalyptic world where mega corporations use people like used snot tissue or human flash drives to smuggle data inside our heads. And we’re all cyborized to make us into half robot slave and half human consumer w#0r3. Then we’d be forced to rise up against ‘the man’ or fight with cyber arms over spoiled meat we find in a dumpster behind the soylent green factory. You want to try some snow crash? (j/k)”

“hmmm… yeah, no that would be horrible.”

You’re soaking in it!

To paraphrase from David Sedaris’s Me Talk Pretty One Day: Every time I hear Trump speak is like having a cesarean section.

Now the States has a chance to have a president even more ridiculous than North Korea, make this happen!