Trump sours on Kushner, wishes his daughter married someone else

well maybe they would make some headway if they would just publicly announce exactly how much they want to be paid to make their family leave?!? 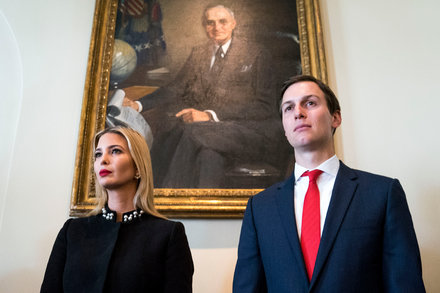 Still Standing, Jared Kushner and Ivanka Trump Step Back in the Spotlight

They have waited out, and in some cases ground down, their critics, and are ready to make a more visible push for their projects.

They’re pretty far out of their depth.

Yea but that occurs any time there’s dew in the morning.

Let’s wait until he start’s putting Jared’s name in brackets.

So much for the asinine “he can’t be a fascist because his daughter married a Jew” theory.

Well, it’s not like it was ever specifically the Judaism that differentiated it as “fascism” instead of some other brand of assholery.

The interesting question this line of thought raised for me is, if you are utterly toxic to every person you encounter in every way possible, is it still bigotry? My high school chemistry teacher used to tell every class, “I don’t discriminate: I hate you all equally.” He was only sort of joking. And that’s like Trump. Literally everyone who crosses his path is an enemy in potentia, and he seems unable to draw a distinction between moral virtue and what’s convenient for Trump. See, for one prominent example, the terms “fake news” and “witch hunt,” his usage of which has nothing to do with objective facts, but everything to do with his sense that the targets of those terms might damage his interests. My interpretation is he lacks any true sense that an act can be mala in se.

Yes, he will absolutely target you for being a Jew, or a woman, or Hispanic, and he will do so viciously and unashamedly. But if he didn’t have one of those available, he’d pick something else, whatever he intuits would be most hurtful to you. So is that still bigotry?

Just to avoid potential confusion, I am pointedly not trying to give him a pass on bigoted behaviors. He still should have his feet held to the fire over each and every one of them. What I’m suggesting instead is that this is something much worse: unfocused, unrestrained, generalized malevolence. To try to hang any specific brand of bigotry around his neck may be to miss the forest for the trees. Yes, you should be offended at the way he treats your particular group, but at the same time we all need to be aware that his apparent hate-on for our own groups isn’t special or unique. It’s entirely circumstantial. If you are inconvenient to him, he wants to hurt you, and the traits you can be offended about are just arrows in his quiver.

It seems to be the same sort of cognitive dissonance that enables the troll wing of the alt-right to say the most offensive things, then laugh at what they portray as your error in taking it as sincere bigotry. The goal of throwing around the N-word, say, isn’t to express a specialized hate for black people. The offense itself was the goal, and to take the bait is to play their game with their ball on their court. It’s insincere, calculated rhetorical violence, which I’d think is miles worse than being a simple ignorant asshole. The latter at least imagine (however wrongly) they have some justification. The former is pure sadism.

…for fuck sake …for fucks sake…for fuck’s sake …is it possessive? plural possessive? dammit are there many fucks or just one they all belong to?! how am I supposed to curse this soap opera presidency properly if I can’t even…?!

One of the beauties of the 2016 election is that either choice offered us a President who shared a grandchild with a convicted felon! The best and the brightest!

I think that Trump’s original plan was to “groom” Jared to succeed him “in 2024”, but, lucky for us, Trump’s not even going to make it to 2020. Just too fucking corrupt, and cracks in the facade are starting to exponentially multiply. Jared and Ivanka’s marriage was obviously nothing more than a merger to join two crime families, and I guess it just isn’t working out for Don The Con.

But if he didn’t have one of those available, he’d pick something else, whatever he intuits would be most hurtful to you. So is that still bigotry?

Yes. A bigot doesn’t necessarily have to constrain their intolerance to finitely many groups. If Trumpo says anything hateful about Russians though, maybe I’ll reconsider.

if you are utterly toxic to every person you encounter in every way possible, is it still bigotry?

Trump may be a thoroughly toxic human being all around, but he is not EQUALLY toxic to every person he encounters. He still manages to save the worst of his derision and bigotry for women and non-white people, for example.

I think Jared and Ivanka deserve congratulation because they accomplished what they were expected to when Trump hired them: nothing.

If you haven’t seen Funny or Die’s Jared & Ivanka, it’s very very much worth the click:

And I wish someone else was President. You can’t always have your way.

I always check the spelling of “vicious”; not doing so has got me in to sticky situations before.

I think it is unfair to Kushner to say he hasnt done anything on the Middle East process.

By what I’ve seen, I have done exactly what was requested of him to do there - try and sabotage it as much as possible.

The divorce is going to be messy. I mean, with Donny’s tiny hands, he’ll only be able to wield a pee-wee baseball bat. It is going to take ages.