I don’t think it’s that clear-cut. W was/is a smart terrible person who put on “folksy bumbler” airs to appeal to his base and strip away any lingering stigma of New England old money and the Ivy League.

With Trump, it’s harder to tell. Clearly he has a massive ego and little or no impulse control. And he’s also clearly an asshole. Even so I don’t think he’s quite as dumb as he sounds.

He’s openly pandering to the asshole vote, and it has worked brilliantly for him so far. Why would he stop?

Several times a week, there is some new flagrant proof that Trump is a raging asshole, unfit to lead, etc. Like clockwork, pundits, opponents and even Republicans call him out. Various sane people predict that this is the thing that’s finally going to bring him down. But then it doesn’t.

With Trump, it’s harder to tell. Clearly he has a massive ego and little or no impulse control. And he’s also clearly an asshole. Even so I don’t think he’s quite as dumb as he sounds.

He’s openly pandering to the asshole vote, and it has worked brilliantly for him so far. Why would he stop?

I think it’s a lucky combination. He’s stupid as shit, but very cunning, not unlike Sarah Palin.
It just so happens that his major asshole-ness and stupidity and word salads ALSO plays perfectly for the asshole vote.

He’s made sure that he’s locked in that 30% hard core support he’s got of the Republican Party. Who needs the other 85% of the electorate?

Parallax error: analyzing the intelligence of his actions from a logical / “convince-me” perspective. He’s not speaking to you. He’s speaking to his base. His base is a bunch of bigoted animals, and a reasoned argument does not reach them, let alone inspire them. Simple race/culture bashing and indignation were the right response for his gameplay strategy. He is counting on a sizeable, homogenous, idiotic, emotional, unthinking voting block. You think he should have had an elegant, reasoned response to inspire them? 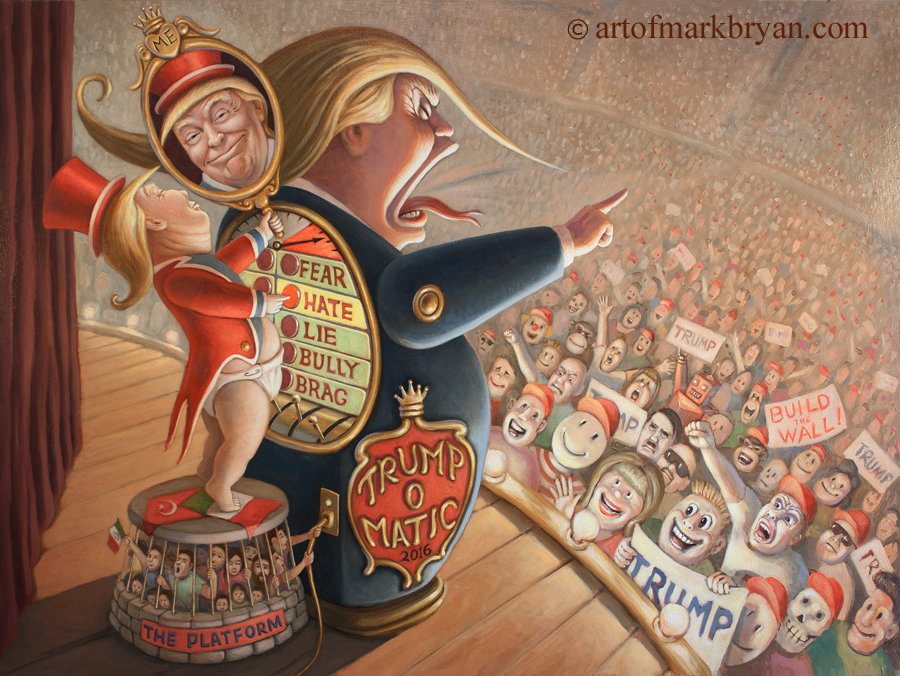 Do you see the Hitler face there in the second row? Spot on.

I would have to think he would take this opportunity to brush up on the Constitution. I am sure he has not, because he can’t. He also should but hasn’t (I’m sure) brushed up on the situation in the Crimea.
It’s not because he can’t read, it’s because he doesn’t have the patience. It’s… pretty stupid to not apply oneself when such clear benefit presents itself.
He really doesn’t even recognize advantage because he thinks that what he said in response in both instances brought him out on top. If he is further humiliated on either topic he’ll say; “Yeah, but you’re dumber than me,” and feel at that point that he has again come out on top. I think this is how he can see himself as such a “winner” while constantly being proven otherwise.

I think you are right. I also think he’s doing it to cover up for the other news that came out in that interview - that he just filed for 65 H2B visas for low-wage jobs like cooks, waiters and housekeepers at his maralago resort when there are currently 1300+ people looking for those kinds of jobs in the same county.

That’s a lot more damning in the eyes of his base but he’s eclipsed it with the Khans.

Stop coaching the dope and let him fail on his own.

He’s been pretty open about running for the title, not the job, so he’s surely in no hurry to brush up on the Constitution.

If he wins, you’ll have President-in-all-but-name Pence, with Trump cherry-picking the parts of the job that he actually wants: bullying other countries (friend or foe), whipping his followers into a frenzy, “making deals”. It will be the final triumph of the Tea Party, with a religious-right wingnut ruling from the VP’s office. Speaking as your mild-mannered northern neighbour, it’s pretty alarming, but I still have hope that the math doesn’t work for this appalling duo.

Fire up the vocal minority, make it sound like you’re more popular than you actually are.
Meanwhile, alienate as many of the rest as you can, make them disgusted with the whole thing, work them into apathy, whatever it takes—every eligible person you can push into not voting is a tally your opponent doesn’t get.

From what I’m seeing, It’s easy this time around because the level of active dislike toward both candidates feels incredibly high. An election cycle that isn’t about facts; it’s about feelings and perceptions. Who’s campaign strategy is more geared to that narrative?

I dearly hope you’re right. The math shouldn’t work for this Republican ticket. It really shouldn’t.

But if you take the 30% assholes, add the social conservatives drawn by Pence who would never ever vote D or Libertarian (and who aren’t already part of the 30%), throw in some clueless folks who can be seduced by demagoguery, add a dash of voter suppression and intimidation, and you start to have what looks like a Coalition of the Damned that’s going to make it much, much closer than it should be.

There’s always ways for people to convince themselves of things they shouldn’t. And many will lie about what they’re really doing. Like the Koch’s saying they’re not supporting Trump and focusing on Senate races. Where they’ll spend tons of ash trying to disparage Hillary while attaching their Senate opponents to her.

We see what you did there Charlie and Davie.

I have just been wondering if Trump has ever actually been hired for a real job by someone unrelated to him… I don’t really want to research it, but I just can’t imagine him in a job interview.

His shtick is that he is super-businessman and he is asking us to hire him as CEO - has anyone else actually hired him? Even as a kid? [Please have a recording of the interview]

I… I don’t think so. I think he’ll have a 24 hour un-scripted TV show in which he does those things.

I resent that! All those other people keep arguing even when they’re obviously wrong. Also, why do you keep posting stuff about me?

(You missed the bit about narcissists thinking everything is about them, so any disagreement is a personal slight.)