Hey, he did sign one piece of legislation! You know, the one that allows for rampant corruption to go unchecked in the energy industry.

Well, if it’s about ratings. His SUCK.

Zachary’s astute analysis seems to be putting a good foot forward to help demystify 45’s antics before 45 starts fingering US economic policy. Will the investment gurus help keep 45’s dog and pony shows translated for the rest of us? Investment guys are in it for the money first and foremost after all. Zachary’s company, Envestnet, has allot to lose if the wheels start to freeze up. Stating in the Politico piece that “Trump has done nothing since taking office” probably goes a long way to help calm potential customers. As well as stating what we all suspect. Smoke and mirrors.

what i’d really like is to hear less from Trump’s Steve Miller, more pompatus of love…

So you’re saying that all of the angst and all of the protests have been a total over-reaction? We’ve just been wasting our time getting upset about smoke and mirrors?

The President is very much a figurehead - he wields no real power whatsoever. He is apparently chosen by the government, but the qualities he is required to display are not those of leadership but those of finely judged outrage. For this reason the President is always a controversial choice, always an infuriating but fascinating character. His job is not to wield power but to draw attention away from it.

An orange sash is what the President of the Galaxy traditionally wears.

On those criteria Zaphod Beeblebrox is one of the most successful Presidents the Galaxy has ever had. He spent two of his ten Presidential years in prison for fraud. Very very few people realize that the President and the Government have virtually no power at all, and of these very few people only six know whence ultimate political power is wielded. Most of the others secretly believe that the ultimate decision-making process is handled by a computer. They couldn’t be more wrong.

We elected a narcissistic reality TV personality with a three-minute attention span and a pathological need for continuous validation, and everything he’s done since taking office has been a meaningless publicity stunt?

Please feel free to picture me wearing my surprised face.

As a child, I thought Pompatus referred to a fried potato dish; as an adult, I’m sure of it

What I’ve been wondering about for awhile is what’s his goal here? I mean, most Presidents are former Senators or people whose entire career is about politics and public service; besides the obvious benefit to his own businesses, what’s Trump trying to achieve?

My theory so far is that he wants a legacy. He wants his name in the history books and he wants that chapter to be long and wordy. He doesn’t want to just be a failed businessman or a bland politician – he wants to be remembered as a colorful, loud character that people will remember and talk about for a hundred years. Actually achieving anything is secondary – what matters is being in the news constantly and making as much noise and mess and chaos as possible.

I don’t know why anyone familiar with this grifter’s decades-long career of smoke-and-mirrors and snake-oil sales would be surprised that he’s doing the same thing in political office. The only things he’s achieved are undermining confidence in the institutions of liberal democracy and providing opportunities for his henchmen and GOP enablers to do substantive damage.

What I’ve been wondering about for awhile is what’s his goal here?

Your theory is on target. He’s a pathological narcissist who only seeks attention, negative or positive.

I’d call him the classless clown. But yeah, he’s basically arrested at age 11, when his father sent him off to military school and this momma’s boy needed to figure out another way to survive.

His economic “deals” are similarly meaningless - so far all have been the result of decisions that were taken well before he took office, and in some cases are totally illusory, e.g. the aircraft contract where he claimed credit for saving taxpayers however many millions - a number that merely represented fewer aircraft being ordered by the Pentagon (again, a decision made previously). In some cases the corporations apparently go along with his narrative presumably because they’re afraid he’ll attack their companies if they contradict him.

What I’ve been wondering about for awhile is what’s his goal here?

All his “accomplishments” are illusions or lies designed so that the media will either report it as true or report it in a way that, on the surface, appears to be true (i.e. the headline appears to give him credit, but the articles indicate the more complex reality). It’s a strategy that works perfectly to shore up support among his low-information voters, even if no one else is fooled. Which is frightening, because we have a greater and greater chasm between his supporters and reality (and everyone in it). He wants support and adulation from his base, and he’s no doubt getting it.

So you’re saying that all of the angst and all of the protests have been a total over-reaction?

Obviously, just because he’s been an ineffective fascist so far doesn’t mean the fascist can’t do some real damage. Just because he’s been playing to his base for propaganda purposes doesn’t mean he won’t eventually get things done - it only has been three weeks, after all. He represents something (fascism) that he normalizes just by being in office. This needs to be resisted. His appointments can do real damage. His crazy, inept foreign policy approach is extremely dangerous. He enables others to do terrible things - from Russia to Republicans in state and national legislatures; he sends a message that, because of the state mechanisms he does have control over, he won’t oppose their actions. All of this is true even if his administration never gets its shit together and gets the help it needs to craft some really nasty, effective executive orders.
Also, he has achieved some things with his orders - he’s muzzled state-employed scientists, for example.

That may be enough evil that all his other pen strokes won’t matter.

I would disagree with the word “meaningless” in the title of this post. Even if it’s all all without much legal impact, all of Trump’s executive actions and bluster have created a very meaningful reaction of fear, uncertainty, and doubt in his opponants, and served to empower and embolden his supporters while bringing them to heel. This is not all just a show, it is The Show.

Wasn’t it Steve Miller who sang “Abra-abra-cadabra…I wanna reach out and grab ya by da pussy”?

He did open up White House data… Oh.

This puts me in mind of the scene/fate of the creatures from Dark Crystal, where they would drain the essence from the Podlings to enslave them… Has anyone checked the White House for a large dark object suspended above a deep firey shaft? Wait, perhaps THAT’S why they haven’t resumed tours yet!!! 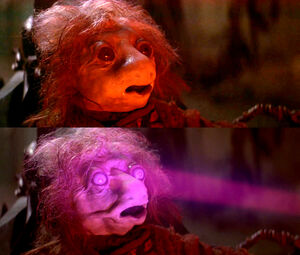