“Failure to do so will leave my client with no option but to pursue all available actions and remedies.”

his party vacillates over ditching him to save itself

That ship has sailed at this point. There might have been a chance of the Republicans pulling together something remotely competent and organized, but the Tea Party achieved its goal of turning the party into a sort of amateur hour for fanatics and hacks. The result is a complete lack of direction. Throw in the long-standing Republican philosophies around race-baiting and general ugliness about people who aren’t WASPy enough and shifting American demographics and you have your explanation for this Trumpster fire.

I weep for our little stubby fingered vulgarian.

The GOP only has themselves to blame for embracing the TEA Party; it was such a vapid movement that chose Glenn Beck, Sarah Palin, and Donald Trump as their early champions and that was very obviously racially motivated. That’s why the Trump candidacy is no surprise, once legitimized by a major party Glenn Beck walked away and Trump became the only Tea Party leader with two brain cells to rub together.

What’s truly baffling is how Teddy Cruz got convinced he ever was a leader in the movement.

Also:
http://www.foxnews.com/politics/2016/10/13/trump-demands-nyt-retract-libelous-article-as-new-allegations-sexual-assault-emerge.html[quote=The Spin]“For The New York Times to launch a completely false, coordinated character assassination against Mr. Trump on a topic like this is dangerous,” Jason Miller, Trump’s campaign spokesman, said in a separate statement. “To reach back decades in an attempt to smear Mr. Trump trivializes sexual assault, and it sets a new low for where the media is willing to go in its efforts to determine this election.”[/quote]Proving once again that the Trump campaign really is so far up its ass it can’t even see what it has been doing for the past few months.

I had to follow the link for Arkell v Pressdram. Brilliant!

Maybe, but can you imagine how difficult it is to sign letters with one’s asshole? He must be adept at it.

Paging Ken White of Popehat to explain all the reasons this is a bullshit threat.

Because everything Trump does IS bullshit.

"Mr Kasowitz also announced an intention to file suit against Mr Donald J. Trump of 2005 who, Mr Kasowitz said, had maliciously defamed his client, Mr Donald J. Trump of 2016. ‘With his intemperate speech, Mr Trump (2005) has seriously injured my client, by knowingly making statements that cast Mr Trump (2016) in an unflattering light and may even have imputed to him actual criminal acts. The severity of the injury done to my client is particularly great because these statements appear to lend support to the baseless claims recently made by other individuals in respect of Mr Trump (2016). My client intends to seek full restitution from Mr Trump (2005), and will pursue all legal remedies available to him.’

Also named in the suit are several other Mr Trumps, including Donald J. Trump (2004), who alleged in conversation with Howard Stern that Mr Kasowitz’s client was in the habit of walking into womens’ changing rooms in order to see young women in states of total or partial undress, and Donald J. Trump (1992), whose public utterances of an implied sexual nature with respect to a then minor child also impugned plaintiff’s moral character and good reputation.

At this time, Mr Trump’s legal team are still considering how best to serve papers on those named in the suit."

But this explains how Donald J. Trump (1995) wound up with that $916-million tax loss! It all makes sense now.

I wouldn’t say that they were embracing the tea party so much as trying to co-opt it. The tea party was reaction by the social conservative/racist wing of the Republican party against the business (elite) wing. Co-opting these folks and using them to win elections and then mostly ignoring them when it comes to actually getting legislation passed has been a way of life in the Republican party since Nixon. But now the problem is that first under Bill Clinton and now Obama, the Democrats have poached support from a good percentage of the Wall Street and Business wing. Combined with the fragmentation of political discourse which has energized the “alt-right” who can now choose to listen to their own sources of “news” the social conservatives now constitute a majority of the Republican party. And now we’re stuck watching “And the Children Shall Lead” with Trump playing Gorgan.

The Ghost of Melvin Belli will haunt you now!

“So if Dow can declare bankruptcy and Donald Trump can do it,” he said, “Melvin Belli can do it.”

They should issue a statement to Donny - “We’re sorry if anyone was offended by our coverage.”

Yesssssss, please do draw even more attention to this, Mister Trump.

I’m beginning to wonder at what point the GOP will yank the ticket (as much as they can) and pretend they just aren’t fielding a candidate this year.

Well Pence has a good shot if Trump were to drop out, which apparently is why Hilary is trying to keep him around.

I’m beginning to wonder at what point the GOP will yank the ticket (as much as they can) and pretend they just aren’t fielding a candidate this year.

If you’d like yet another super-duper facepalm, please note that the trump campaign doesn’t even know what’s true and what’s not, since their candidate refused to undergo the standard background research:

From the Kansas City Star:

Trump told aides not to check his past, report says

People are already voting for Trump in early voting. It’s too late to change the ballots. Pence can’t be the candidate.

I was just thinking that the party could expel Trump (is that possible?) and/or disavow him as their candidate (tell people to vote for McMullin or Johnson?) - perhaps get Pence to say that if elected, he would not serve with Trump, that sort of thing.

At this stage, their brand is toast. They can’t win national elections with candidates that appeal to the constituency Trump is attracting, so they need to jettison them anyway at some stage. The sooner the better, I’d think. It’s a tradeoff as to what will do the greater damage in the House/Senate elections, I guess.

Trump told aides not to check his past, report says

This is what I really don’t get. None of this was a secret. 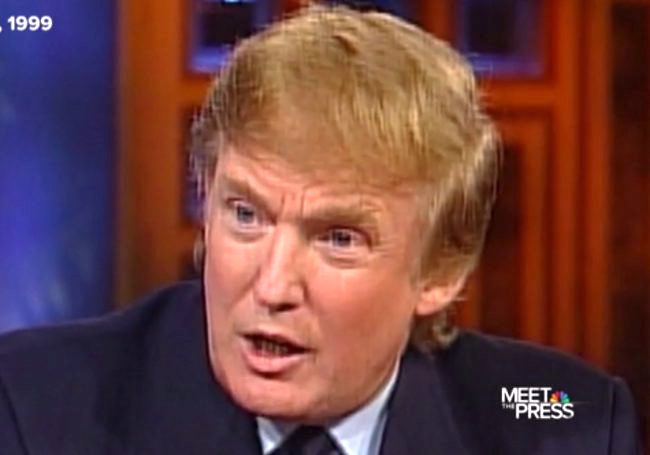 In 1999, Trump Said He Couldn’t Be President Because of the Women He’d Sleep...

People are already voting for Trump in early voting. It’s too late to change the ballots.

Remember that people are actually voting for electors in the Electoral College, not for the candidate directly. The Elector for Trump can vote for whomever they want.

Now, about half the states have laws that the elector must vote for the candidate as named. But the crimes of doing so are just misdemeanors with small fines. Such laws may even be unconstitutional.