This really shows that people need to confirm facts before reacting. How easily this could have escalated into something much more horrible.

It also shows the restraint of NATO leaders. It could have been used as an excuse to escalate direct support for Ukraine. Russian objections that it wasn’t their missile would have been written off as more lies.

Ask Iraq what it’s like to be blamed for something they had nothing to do with. Glad cooler heads prevailed on this one.

No thanks. I’m trying to quit.

Yep, this is exactly what my wife and I were saying right after we heard about the missile. “Wait for confirmation.” Cool heads and honesty count for something still.

It’s a “good” result for a horrible thing, in that we are all still alive to talk about it today.

I mean, I’m very glad this was not a Russian attack, but nothing to do with is a little strong. Unless you think Ukraine is firing missiles for the thrill of it.

This seemed possible, at least, yesterday. I don’t have any expertise on missiles, but here’s what I came across. The UAWeapons thread does say that while it was certain of what that fragment came from, one fragment wasn’t enough to be certain of what happened. 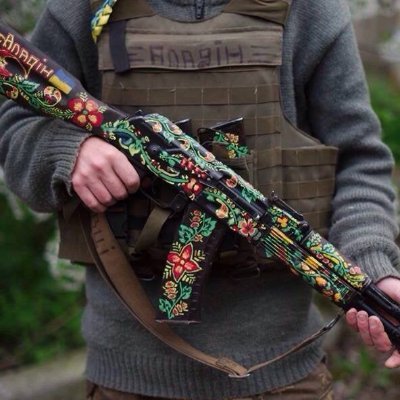 @UAWeapons
So what crashed in the village of Przewodów, Poland today? With the cooperation of @blueboy1969 we analyzed the available photos of fragments and came to a clear conclusion that they belong to the 48D6 motor of the 5V55-series missile of the S-300 AD system- a Ukrainian one. https://t.co/f0Ex3USLN8 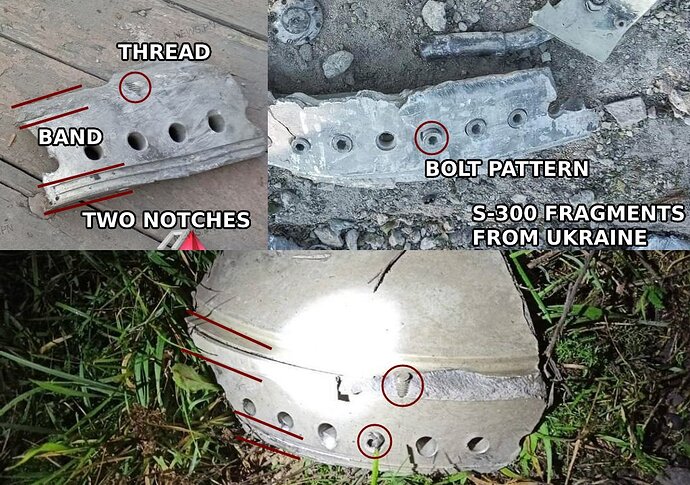 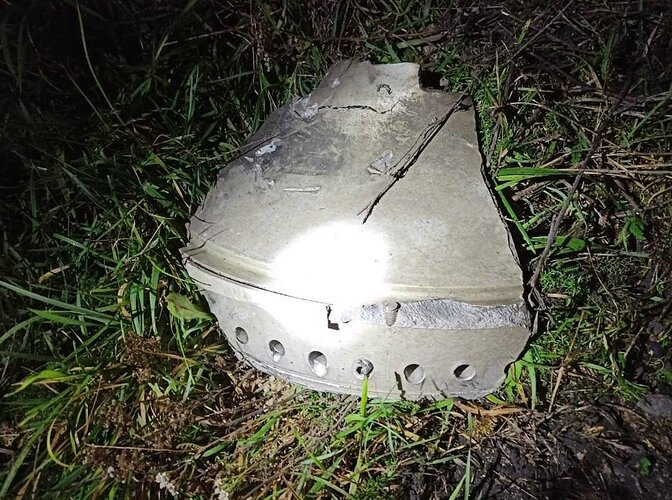 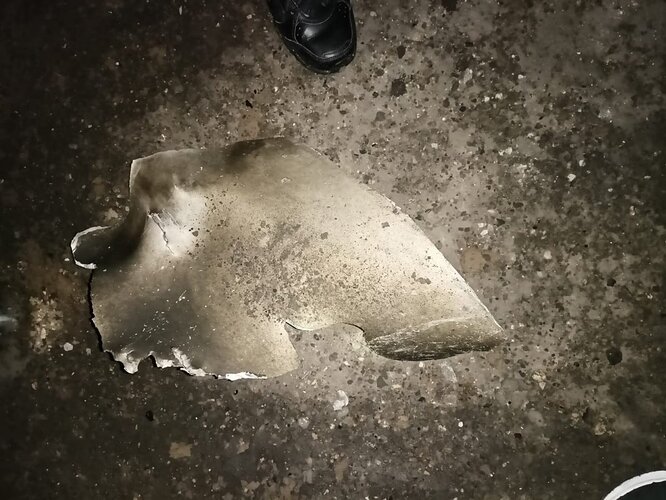 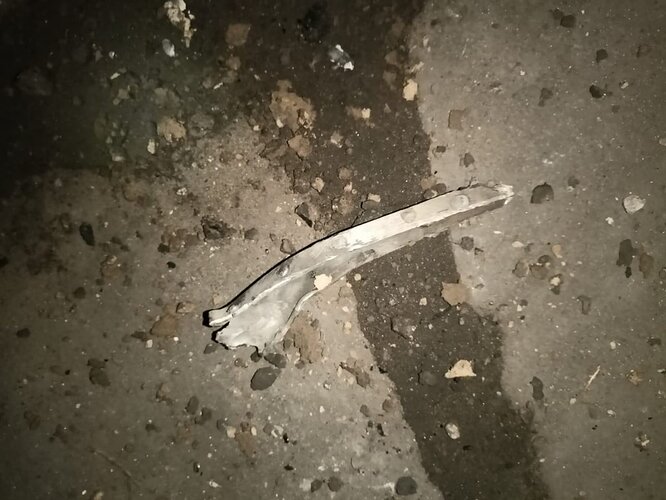 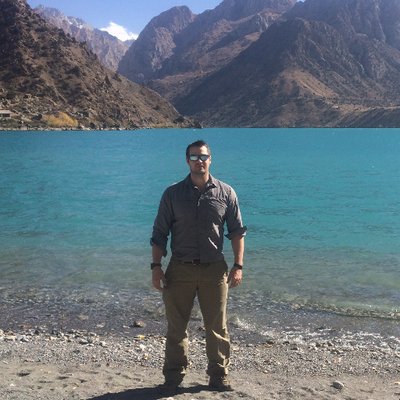 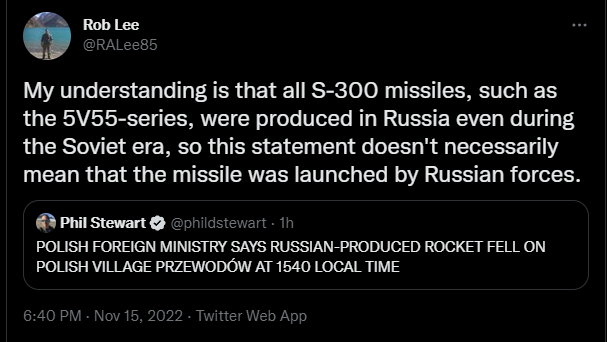 Polish President Duda said in a Tuesday address that Poland does not know yet who fired the missile that caused an explosion in Przewodow, also noting that the missile was "most likely produced in Russia.” He also said the US is sending experts to investigate the site.
3 Likes
Brainspore November 16, 2022, 9:34pm #11

From the start it looked like this was most likely a mistake regardless of which side it came from. If Russia ever decides “hell with it, let’s get involved in a shooting war against some NATO countries” they probably won’t do so by shooting a single missile that isn’t even aimed at any target of strategic importance.

It’s scary. We are moving into an era of cheap missiles and drones. No longer state-of-the-art weapons, we’re going to see a crazy proliferation of these. I don’t think any country will want a tank or airplane anymore, with all of these flying around.

I don’t dispute the part about significant advances in, and increase in availability of, various drones and missile systems; but this one probably isn’t a great example.

I’ve not been able to find a unit acquisition cost; but if the debris analysis is correct in stating it’s a 5V55 of some sort it’s a pretty big missile(7m long, just under 1,500kg) and dates back to somewhere between 1982 and 1992; with, details varying depending on the exact age, a fairly demanding set of ground infrastructure(at least one surveillance radar, a fire control system, plus a transporter-erector-launcher for each pair of missiles). It is movable; but it would not be described as ‘nimble’.

Absolutely dangerous; a 100-150kg warhead is serious business; and the missile is big enough to present a kinetic hazard if it lands in sufficiently large pieces; but it’s definitely not one of the sneaky new systems also being trotted out.

In an alternate universe, President Trump blamed it on China, initially, then Mexico, then Hilary.

As others have said, always better to wait for the full facts to come out before coming to a conclusion.

None the less, it is ok to discuss what might have happened and what the evidence looks like at this, as little evidence as there is.

At first I thought it had to be a Russian missile. Reasons: a really big hole, indicating something bigger than a SAM.

However, there are some versions of the S300 with pretty big payloads, over 100kg. I don’t know which variant the Ukrainians are using, but it’s at least possible that one of the big ones could make a hole like that.

However, the Ukrainian versions are all set up for surface to air only and apparently have failsafes to self-destruct if they miss. This makes perfect sense. SAMs would very often be used in urban areas and you would want them to self-destruct, especially if they have a 100kg or more payload.

So this just sounds more like a Russian missile. It should be pretty easy to determine from the debris what it is, but we don’t have any detailed photos of that. We only have NATO’s assertions about it.

And there’s one speculative, but intriguing, analysis going around that some Russian missile controller dude mixed up coordinates of Kiev and Lviv.

In an alternate universe, President Trump blamed it on China, initially, then Mexico, then Hilary.

He wrapped up by pinning it on the “globalists” at NATO, who are of course the real war-mongering villains victimizing poor ol’ Russia.

Seriously, there are those on the American right who would have loved it if NATO didn’t exercise the restraint it has thus far re: the war in Ukraine, especially in a dangerous situation like this. They don’t really think through the consequences, they don’t actually want NATO to push Russia back over the border; they just want the chance to claim that Russia is being bullied by the West.

As it is, though, they’re still stuck with their fascist and white supremacist hero in the Kremlin as the obvious aggressor and bully while NATO behaves like responsible grownups.