Ut oh, someone was friendly with, but didn’t actually have diplomatic immunity.

There’s a new Marshall in town.

Kinda disappointed about the tepidness of the investigations. Turkish residents of the U.S. are investigated, but not the bodyguards? From what I know, service staff only have immunity from official acts on behalf of the diplomatic mission.

Does kicking the crap out of people in the U.S. fall under official acts on behalf of a diplomatic mission? Can someone here clarify?

I believe, here, in the US, it’s called “campaigning.”

Arrested? This is illegal? How the hell are we supposed to make America great again?

Kinda disappointed about the tepidness of the investigations. Turkish residents of the U.S. are investigated, but not the bodyguards?

Turkish security detail members to be charged after DC brawl

Ataturk was a jerk!

But a helluva military commander! 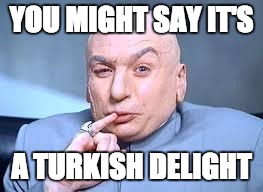 At least to those who were attacked.

At the end of the day, the members of the security detail will simply be declared “persona-non-grata” and not be allowed into the country again. For good and bad, that’s the way diplomatic immunity works.