We know some police departments have been guilty of this in the past but that’s not what this is about. Is it?

That’s what is being claimed – the protesters say that the two were inciting damage, and that’s how they were identified as undercover provocateurs.

Ahh, Berkeley, so many reasons to love you… 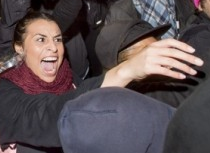 At least that’s what they said.

good for you, sticking up for the armed policeman waving a gun around in the middle of a crowd after he had been outed. it’s refreshing to see someone step up and back the boys in blue despite misconduct and creating a public danger by waving his gun around and pointing it at anyone who was trying to document him. it takes a lot of courage to support that kind of incompetence and stupidity and i’m glad to see someone with the courage to do that. my hat’s off to you.

Pointing a deadly weapon at a crowd is very near the final conclusion of that continuum.

If it stops further violence it concludes the continuum as apparently it did in this example. It seems to me that a conclusion was necessary to stop further escalation. Bravo.

Sometimes it’s the penultimate step in the continuum… The Kent State shootings (also known as the May 4 massacre or the Kent State massacre) were the shootings on May 4, 1970 of unarmed college students by members of the Ohio National Guard at Kent State University in Kent, Ohio during a mass protest against the bombing of Cambodia by United States military forces. Twenty-eight guardsmen fired approximately 67 rounds over a period of 13 seconds, killing four students and wounding nine others, one of whom suffered permanent paralysis. Some of the stu...

These cops made provocative decisions at every branch on the decision tree. The fact he didn’t open fire should not be counted to his credit, since he created the situation in the first place.