UNH will spend $1M of librarian's bequest on a football scoreboard

$1M as a giant testament to young men getting head injuries.
Of course.

I’m surprised that it was only one million and not the whole sum, with token pocket change tossed to the scholarship funds.

This is, after all, a modern university we’re talking about.

Memo to self: restrict bequest. 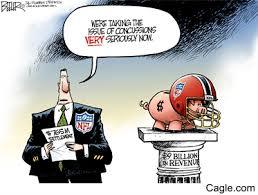 Hell, even if he had given it with more specific instructions, there are legions of people who stay up nights thinking about how to screw over donor intent. The only place I ever saw who did that right was the Olin Foundation, who insisted the money be used up in 25 years or so, lest his opponents take it over.

$1 million. For a football stadium scoreboard. In hockey country.

Looks like Mr. Morin foolishly trusted the judgement of his former employer by only earmarking a small portion for specific use. When bequeathing a gift of that size it’s always a good idea to place restrictions on it, whether you’re leaving it to a child or to a university with a child’s sense of priorities.

You and I are very simpatico today.

having just listened to the “Revisionist History” podcast episodes about funding in education this does not surprise me. If you are reading this thread you will probably like the podcast series.

Is it a scoreboard scoreboard, or one of those giant LED things?

Maybe in the off season than can use it to display educational films.

If nothing else (and it certainly is something else), UNH’s disposition of the gift is short-term thinking. Sure, they get a shiny new scoreboard out of this gift now, but how many potential future gifts are they putting at risk by this behavior?

People will either choose not to give, or will attach narrow restrictions to their gift such that, if UNH ever really did need the money from a future gift for something important, they still could only use it to fund the endowed chair in underwater basketweaving.

So much for Yankee thrift.

My university in the UK got a grant to build a leisure facility.

They built a lecture theatre, and put films on in the evening once a month.

I figured out I could go to grad school at a private, out of state college for less money than going to UNH as an in-state student. This sort of thing doesn’t surprise me.

I get so angry when my state politicians refuse to adequately fund the state University system, and then shit like this happens and I think, “you know, they may be on to something.” As a NH resident and taxpayer, I can only sigh heavily.

One thing I learned as an undergrad is that universities, at least the ones that have been around long enough to have large endowments, know that they are immortal and as a result they have lots of workarounds. For example, even if you never spend a restricted bequest, you can invest it, and the returns are unrestricted. You were only going to spend 6% a year anyway, after all.

Well, if they spent it on TV dinners and…Matilda! What was they them other things called?..car parts, that would have found past the edges of unrestricted!

Like a rainbow of restriction, only…yes, Revisionist History not Drunk History, had to go over that a few times, Viper Dot With Gladwell can be a VR pilot or something. Information Products with more than 2 vetted numbers to tank crazy high. Really, it wasn’t too much to ask the Athletics And Statistics Department to interpretive-dance the scores instead.

I knew a guy who gave enough money to his alma mater to endow a chair in the sciences – now usually these things are for full professors and when a new chair is coming, lots of folks who don’t yet have an endowed chair want it, of course. This fellow made the restriction so the endowed chair was to support only an untenured professor – and if they got tenure, they had to give it up so some other young professor would get the benefits of the support of the endowment. It was written in such a way so the funds devolve to the university general fund if that restriction was broken.

I imagine some people in the department were annoyed, but want to keep that money for the department alone, so the chair remains supporting only untenured faculty, some 30 years on.