UNH will spend $1M of librarian's bequest on a football scoreboard

And you can borrow using it as collateral and spend that money any way you want.

This is the same school where on a college tour the guide said “don’t get arrested more than once or twice or you might get kicked out”. They did not receive an application from this family.

I once thought that if I were to give a large gift to my alma mater it would be in the form of a sorely needed piece of lab equipment or supplies, given to a professor in the late of night so it wouldn’t be noticed. But then I heard someone gave the school something like $360 million in unrestricted funds, so I said screw that. They can jolly well refund my tuition.

When bequeathing a gift of that size it’s always a good idea to place restrictions on it, whether you’re leaving it to a child or to a university with a child’s sense of priorities.

Loose restrictions that prevent the university from squandering it, yes, Detailed Restrictions, no. Failure of the imagination should not prevent gifts from being used to repair the library’s roof.

part of giving to a university is the trust that the recipient won’t waste it, that it knows how best to spend it to further its mission. UNH should be ashamed of itself.

Though after reading the comments, it seems that some university presidents are not to be trusted.

Many, many years ago (under a completely different administration) we had a donor to the library who specifically banned this move from her bequest. This happened after an incident when she gave a substantial donation to the library one October, and the administration turned around and cut the library’s budget by the exact amount of her donation in December. Subsequently, when she passed away and left money to the library her will specified that it was not to be used to supplant library budget.

Well the football team clearly deserved it. How much money did the library earn last year?

Maybe the sign company employees will send their kids to the college?

I’ve worked in non-profits my whole life, and most of my win-the-lottery-so-I-can-enjoy-giving-back fantasies involve not specific spending restrictions, but rather restrictions tied to firing certain incompetents, assholes, and wastrels.

But yeah, a scoreboard? Even if he liked football, that’s just insulting. And boring. If it were me and they were going to waste it on sports I’d rather they at least do something like supply all athletes with sports bras and jock straps for 100 years. Each one with a little tag that says “you are being supported by (name here)”

This might be an odd question, but why do people leave large sums of money to universities? It’s giving to the very very wealthy. (Who waste tons of their money so that they can justify driving up tuition costs to get even wealthier at the expense of the poor.) Why not give to people who need it, set up a scholarship fund, or at least give to someone who would spend it better?

Wasting it on a scoreboard is sad but expected. 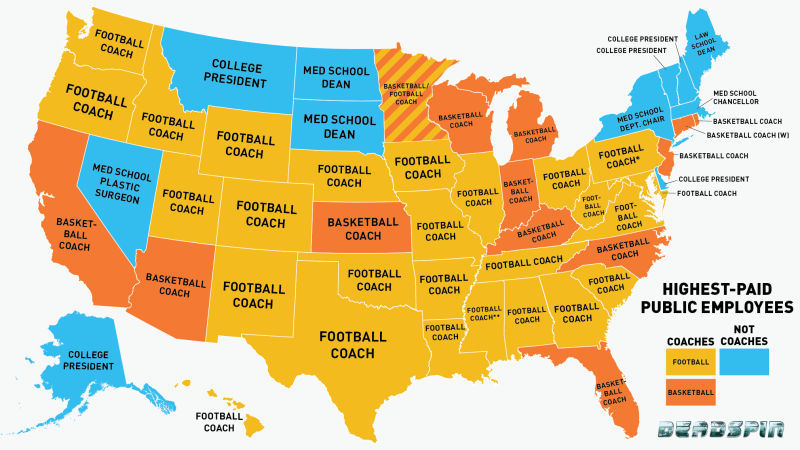 Wait, I thought that there was one state where the highest paid employee was a hockey coach…

You know, the usual justification for universities spending huge amounts of money on their sports programs is that they encourage alumni to donate money to the university that actually CAN be spent on academic pursuits. In this case that was turned on its head, and the library was the reason that an alumnus donated and the university but the administration decided to spend much of that to support sports.

Very few universities are “rich.” Yes, UNH has a 336 million dollar endowment, but the annual cost of educating 15,000 students and supporting research programs is on the order of 100 million dollars per year (a two billion endowment might allow them to reduce tuition to near zero, and not rely on state subsidies).

Now, that’s quite healthy from a financial point of view. My own alma mater was much smaller, and could be described as impoverished. They probably “need” the money more than UNH does. But they have no connection to Robert Morin.

the problem isn’t necessarily giving $$$ to universities, it’s the way the universities spend it. Sometimes the $$$$ comes with provisions - for a new, named, library wing or something along those lines. Universities, public ones, at least, are a public good and the fact that so much goes into athletics is the problem, because that’s not what universities are for. They are for producing knowledge and educating the public. Neither of those are bad things for a society, I don’t think.

None of that map surprises me, though.

In general I’m in favor of giving money without entailing it with many restrictions. (unless you still want to attend board meeting like Jeremy Bentham) You just don’t know today what problems will come up in the future. But if you can’t trust the organization to spend the money wisely, then you shouldn’t be giving them money.

That’s fair enough. I do think that there is far less autonomy for public institutions vs. private institutions in how they use endowments and such. I also think a powerful enough donor (to any institution of higher learning) can make their wishes known and are respected in what they’d like to see the $$$ go for. The average alumni, probably not. [quote=“simonize, post:36, topic:85454”]
In general I’m in favor of giving money without entailing it with many restrictions.
[/quote]

I do think it’s probably a better idea to allow the university to figure it out rather than to dictate.

I do think it’s probably a better idea to allow the university to figure it out rather than to dictate.

I regularly donate to 3 different universities, including my present employer, and I put restrictions on the donations to one of them. It is a matter of whether one respects the decision-making abilities of the administrators or foundation for the institution in question.

Big restricted donations can be problematic, as they translate to outside influence on the operation of the school. If someone gives a bundle to a particular department or program this can create an additional need for recurring/operating expenses for that department which come out of money that would otherwise go to departments more in need. This happens quite a lot not only in athletics, but also professional schools.

There are so many stories over the last few years of schools ignoring the intent of donor bequests (especially in-kind, eg breaking up art collections) that they will continue to lose their attraction to many donors, especially faculty like the librarian in this story.

It is a matter of whether one respects the decision-making abilities of the administrators or foundation for the institution in question.

True. Here at GSU, we seem to spend it all on new buildings down town (like, we’re buying up the turner field location once the Brave vacate at the end of the season and decamp to Cobb, further north) and the president, who is the highest paid in the state (more than UGAs which is the states flagship university). We do have a football program now and the Turner field purchase is partly about that, but we’re getting new student housing and retail spaces there, too (and the local community that isn’t GSU has demanded some focus as well. [quote=“d_r, post:38, topic:85454”]
Big restricted donations can be problematic, as they translate to outside influence on the operation of the school.
[/quote]

That’s very true. It can be seen as undue influence. I remember in one department, like a Mid East studies program, I think, in one of the ivies (I can’t remember where it was), there was an endowed chair paid for by the Turkish government… It can be dicey at times, that’s for sure. [quote=“d_r, post:38, topic:85454”]
There are so many stories over the last few years of schools ignoring the intent of donor bequests (especially in-kind, eg breaking up art collections) that they will continue to lose their attraction to many donors, especially faculty like the librarian in this story.
[/quote]

No doubt. Yet more scrambling for cash will occur.

But sports! You know, that institution that teaches valuable lessons, like…uhh…how to have the right genetics and the unbelievable luck to be able to earn untold millions of dollars for a professional league, and then spend it all and be destitute before you reach your 40’s, because you were too busy learning how to throw or catch a ball to learn how to be fiscally responsible. Some books might have helped with that, but we were too busy funding a scoreboard. Sorry.