Even if he wasn’t a lying bastard who tried to victim-blame the teachers at the school for the slaughter it’s pretty damn clear he’s completely incapable of performing the duties expected of him. If an entire police department can’t stop or even mitigate a violent slaughter like this then what the hell is the point of having them around at all?

the police chief was concerned about his safety.

Hey, you know who else was worried about their safety?

I’m wondering how long before he has another law-enforcement job. Obviously under normal circumstances, a cop being fired for wild incompetence/criminality just means immediately finding work at another department, but I kind of suspect the combination of being chief, being very publicly incompetent, and the stench of his grotesque failure might actually have an impact on the willingness of other departments to hire him. Certainly I have a hard time seeing him getting hired at that level anywhere else in the immediate future.

He will be speaking at GOP rallies any moment now.

“Fired” is, coincidentally, an unfortunate word to use in this circumstance.

Why, have they had anything nice to say about him? The main narrative I’ve heard is this proves everybody needs guns and more guns because the police won’t protect you, and he is hardly the hero in that.

He will be speaking at GOP rallies any moment now.

That would be a lot more likely if he’d actually killed some (brown) kids himself. Instead he’s just a bit of an embarrassment, as he contradicts a lot of conservative rhetoric about the “solutions” to gun violence. He was so inept in the handling of the aftermath of events that he even pissed off other cops and law enforcement. Which means a lot of the normal career paths for disgraced ex-cops are also unavailable to him - or at least a harder sell.

There’s incompetence, fucking incompetence and then there’s sitting back and doing nothing while a bunch of children get murdered. He’s not fit to be an assistant manager at Burger King, much less lead a police force.

Hope this little PieceOf spends the rest of his days shoveling dung around.

he even pissed off other cops

This one guy almost singlehandedly resurrected the Defund The Police movement

Imagine sucking so bad at your job that people don’t just want to fire you, they want to abolish your entire profession

The entire Uvalde police force needs to be disbanded and reformed. It’s happened with other small town police forces. The county sheriff can fill in until they are all replaced.

No. It needs to be disbanded and not reformed. It’s preposterous that such a tiny town has a police force in the first place.

That’s what I was wondering as well. Where I’m from, first of all, this would be called a village, and second of all, it wouldn’t have a single dedicated police officer, being instead served by the police from the next biggest town on the few occasions a year police was needed.

Ah,.I see. The comment I replied to in the post I linked said 1500; a typo no doubt. In that case a small police force of c. 5 officers is probably justified.

“Chief Arredondo hopes at least those who are willing to listen, understand that he is, and has been, from the time McCraw unfairly singled him out, being forced into the role of the “fall guy”, “the sacrificial lamb”, whichever term preferred; and, this once again demonstrates that no good deed goes unpunished.”

I’m just not sure what you can say to someone who faffs around while 19 children and two teachers get shot to death; then describes himself as a ‘sacrifical lamb’. FFS, I’m not going to go quite so far as to say that this falls into the ‘they invented ritual suicide atonement protocols for this stuff’ territory; but it’s definitely the sort of thing where the bare minimum you can do is recognize that you’ve screwed up far too badly to try thumping on procedure and just slink away as quietly as possible.

It’s preposterous that such a tiny town has a police force in the first place.

IN TEXAS, THERE ARE NEVER TOO MANY COPS

The police chief for the town was somebody else 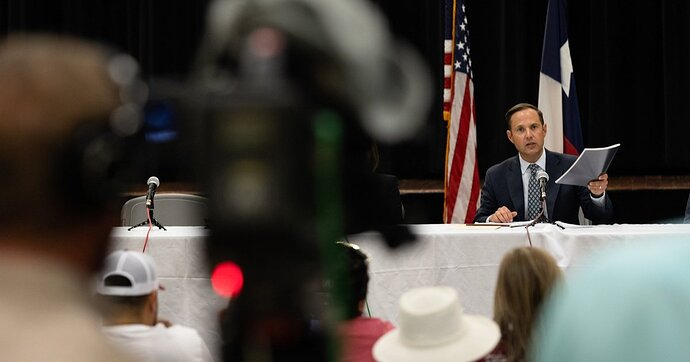 Lt. Mariano Pargas was the acting city police chief the day of the shooting. Mayor Don McLaughlin said the city is investigating Pargas’ role in the delayed confrontation of the shooter.