I dunno how much the principle is to blame. Shooting aside, if doors and locks are in disrepair, that is showing one not administering upkeep of the building. I know budgets are tight But locks are not very expensive and a door is an important part of infrastructure. I am sure there are other issues being ignored in the building too, and that really should have been dealt with. Though I am sure she never in a million years thought these issues would ever be an issue security wise. I grew up in a town a little smaller than Uvalde, and the prevalent attitude with a small towns is, “Bad stuff like that doesn’t happen here.”

Still, from a security perspective, I am not sure how much working doors/locks would have changed things. It really is just an exercise in speculation and you can’t with any certainty declare what definitely would have happened.

You can with 100% certainly point to the abject failure of the police response.

I’m no expert on police tactics, but it does seem to me that if the chief of the 5-person school “police force” is suddenly in charge of a group of 370 heavily-armed people from state, federal and local police forces, with no pre-established command or management structure, he’s probably going to fail.

The police chief was co-author of the active shooter plan. Even if you somehow believe the plan was flawed and someone else should have been in charge it’s still his fault. 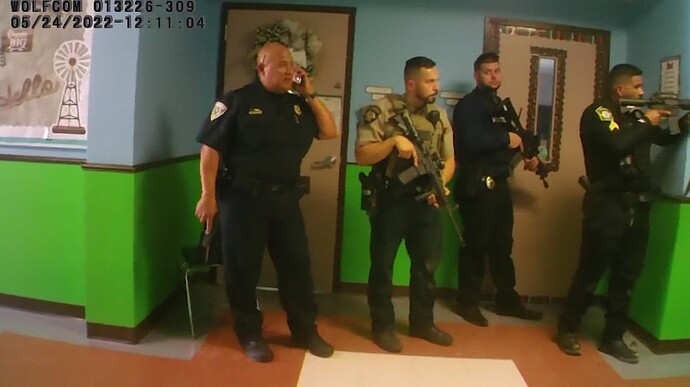 The special committee said Chief Pete Arredondo co-authored the written policy even though he said he did not know he was in command during the school shooting.

Edit to add: to clarify, I mean the chief was ultimately the one most at fault for the inadequate police response specifically, not the fact that these mass shootings keep happening. Plenty of blame to spread around for that.

I’m having a hard time feeling upset about this.

Must be nice, because everything I hear about this case is mortifying to me.

The people most culpable, aside from actual the shooter himself, is everyone who made it possible to obtain deadly weapons of war so easily.

with no pre-established command or management structure, he’s probably going to fail.

They trained on school shooting response one month prior. There is no excuse that they weren’t prepared or that there wasn’t a command structure. They simply failed to do their fucking job.

But apparently the default response in these situations is to go in with what you have as soon as you can. And he could’ve done that

it wasn’t even just some passive default. they trained on this scenario regularly. and they - and all school cops - use the threat of these shootings to justify their salary and perks. this is their job and they didn’t do it.

if cops can’t be brave enough to do their job on the regular, maybe we need a different approach altogether

I mean, for fuck’s sake, that school district had its own goddamn police department, but it’s still the principal’s responsibility? Fuck that

i had posted this in another thread, but “coincidentally” the board decided not to fire a certain someone over the weekend 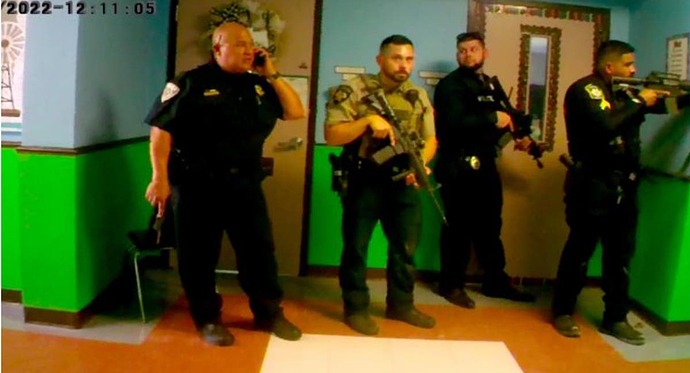 Uvalde school board cancels meeting to vote on police chief’s firing over...

Meeting for vote on Pete Arredondo’s removal was postponed indefinitely

The principal is responsible for school security procedures, and if she knew they weren’t being followed and didn’t do anything about it, then she _should_lose her job.

My guess is that most schools in Uvalde share plant operations/maintenance staff. As someone who used to work in public high schools, just because someone wants something fixed doesn’t mean it gets fixed immediately. Plant operations will always require a requisition, and they fix things in order of received requisition.

Also, a big high school in CA has a small crew of maintenance employees, but its locksmith duties are typically relegated to the district plant operations. A dude needs to come out from the district office to make any changes to the automatic locking mechanism. This school was small, they may have one janitorial staff day staff and that’s it until two more show up at 3 pm.

If that is the case, then I’ll take back what I said. If she was doing everything within her power to solve the problem but still failed, then I’ll agree that she should not be fired.

The thing I’m having a hard time feeling upset about is the principal losing her job. There seemed to be a tone in the original article as well as the first few comments that implied it was somehow unfair that this principal is losing her job. I’m not upset about her losing her job because I’m furious about the situation and the overwhelming cascade of failures in leadership that allowed this to happen the way it did.

How magnanimous of you!

The thing I’m having a hard time feeling upset about is the principal losing her job.

Really? A Latinx woman is being punished for the failures of nearly 400 cops, who sat by as they could hear children being slaughtered, and THAT’S what you’re having a hard time being upset about? Fucking REALLY?!?

But he did, and the principal knew that this was a possibility. Knowing that, there is no excuse for not enforcing an appropriate level of security. This is not a simple issue with a single source of blame.

Every one of those cops should lose their job, and in a reasonable world at least some of them would go to jail. And the principal should lose her job, because the should have been fucking locked, and apparently she knew that wasn’t happening on a regular basis.

Knowing that, there is no excuse for not enforcing an appropriate level of security.

What, in your mind, is an “appropriate level of security” that will keep murderous maniacs with military-grade weapons from attacking a school that has countless windows and other potential points of entry? Fort Hood is a freaking military base and still suffered two mass shooting events within 5 years. Focusing on somehow trying to make the campus impenetrable is the wrong priority. And public school principals have a lot on their plates.

Did you miss 400 years of racist BS? You KNOW she is the ONLY one who is going to lose her job over this… Don’t lean into the racist BS, man.

The thing I’m having a hard time feeling upset about is the principal losing her job.

And that’s what really matters here; how you feel personally.

the person who murdered children in cold blood would have been hesitant to, say, break a piece of glass on a door or window to gain entry?

Maybe not, but it certainly would have slowed him down. Every school I’ve ever been in has wire lined glass, so breaking it and getting through to open the door would have taken time. The cops were there. Given what we know about their incompetence maybe they would have just sat there and watched him for 5 minutes while he broke through, but maybe in that time someone actually take a shot and ends this before any students are killed. We’ll never know because he was able to just walk in.

Turning schools into impregnable fortresses is not the answer here.

Agreed, but that doesn’t mean it’s okay to not take even basic precautions like locking the doors.

You KNOW she is the ONLY one who is going to lose her job over this.

I don’t KNOW that. If it ends up being true, then that will be a fucking disgrace.

This is America. Of course it’s true. Anything to ensure that the police do not have to take responsibility for their role in the slaughter of 19 children and if it can be pinned on a POC, all the better.

Agreed, but that doesn’t mean it’s okay to not take even basic precautions like locking the doors.

Joe Clark infamously got arrested for it in his attempts to rid his school of drug dealers back in the 80s.