The problem was more deeply rooted in that there were few opportunities for black people to become stars in the first place.

Imagine how much power white actors like Olivier could have wielded to change that situation if they’d refused to play those parts and insisted on casting people of color.

If any Canadian voter wants to give Trudeau a get-out-of-blackface card based on his party’s platform, they are certainly within their rights to do so.

What I’m saying is that if I had in my own past several discoverable instances of being photographed in blackface, I would be extremely circumspect about saying that other people are racist. Wouldn’t you? In fact, I might STFU entirely.

And if I got caught, I would not say the sort of thing that Trudeau did yesterday…

“People are still facing racism every day,” he said. “Systemic discrimination still exists, in our schools, university, workplaces, and our communities. We must pledge ourselves to make sure we make it better.”

…trying to deflect the subject from his personal conduct onto the Canadian population as a whole.

I just meant in the sense of Star Trek being a colorblind utopian future, with all the humans have the same clean-cut military apparance, contrasted against strongly racialized alien species.

Oh sure! That’s true. I think that what made DS9 so awesome in that regard is that it did bring up some more uncomfortable aspects of race that previous series had not quite tackled in the same way (they did it usually through alien conflict). But they had at least 3 or 4 episodes where race is explicitly mentioned (Far Beyond the Stars, but also the one where they have the weird holosuite 60s caper, and then when Sisko, Bashir, and Dax (I think?) go back to the 2020s for the revolt in San Fransisco that puts earth on the path to unification and warp travel - at least I believe that race was discussed in that one…).

But you’re right on that. I do think it’s interesting who they picked to cast for his parents, which mirrors his own background (although with parents reversed, his mother was English and his father Sudanese).

“Don’t be in a hurry to condemn because he doesn’t do what you do or think as you think or as fast. There was a time when you didn’t know what you know today.” Malcolm X

Malcolm X said that in reference to not judging the Urban League or NAACP for how they had they might have to get support from rich people in order to help poor people.

The point of the quote is not to judge people specifically for actions that might be done to ultimately help the cause of fighting injustice.

If you’re trying to say that no one should judge Trudeau for wearing blackface because maybe it was all part of a secret plan to help POC, or that wearing blackface is a “tactic for liberation” or “means to an end” that Malcolm X would look kindly on…well, there are few words for how twisted and messed-up that take would be.

No not at all, the interviewees knew what was going on. Sorry you did not understand that.

What I’m saying is that if I had in my own past several discoverable instances of being photographed in blackface, I would be extremely circumspect about saying that other people are racist. Wouldn’t you? In fact, I might STFU entirely.

This seems like a sociopathic argument:
“I did a racism. Therefore I should never complain about racism in society. Therefore I achieve my only goal: self-protection over any social or human ethics.”

Or a Libertarian/Objectivist one. Six of one, half a dozen of the other. The important thing being that those types of arguments are regularly deployed to get various conservative parties elected. 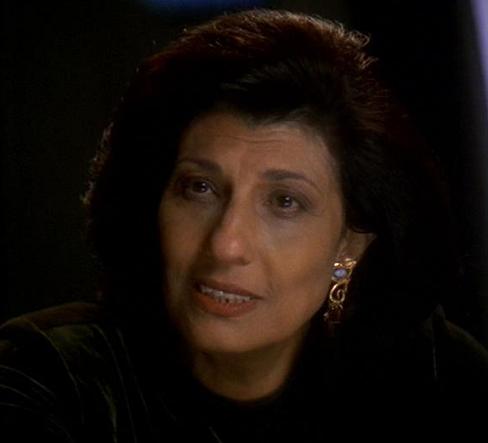 Amsha Bashir was the wife of Richard Bashir and mother of Julian Bashir. In 2348, Julian (or "Jules") was having problems in school, not learning as quickly as the other kids. She and her husband decided to go to Adigeon Prime to have their son...

Amsha Bashir was played by actress Fadwa El Guindi. In the first draft script of “Doctor Bashir, I Presume”, this character’s first name was “Mariel”. The Star Trek: Deep Space Nine Companion noted the difficulties Junie Lowry-Johnson and Ron Surma had with casting an actress to play Amsha Bashir. Alexander Siddig noted that there are few Muslim actresses in the West. Fadwa El Guindi was found by Surma, as she had performed community theatre. Ira Steven Behr noted that she was nervous about acting, but considered her performance to have been excellent.

“Forgiveness does not relieve someone of responsibility for what they have done. Forgiveness does not erase accountability. It is not about turning a blind eye or even turning the other cheek. It is not about letting someone off the hook or saying it is okay to do something monstrous. Forgiveness is simply about understanding that every one of us is both inherently good and inherently flawed. Within every hopeless situation and every seemingly hopeless person lies the possibility of transformation.” Desmond Tutu

“Forgiveness is how we put a stop to anger, ill-will and a desire for revenge.” Dalai Lama

He’s twisting the Malcolm X quote that in context was about not immediately judging the specific tactics that allies use to fight injustice, to mean some blanket “Don’t judge allies when they mess up and create injustice.”

I’m just amazed that anyone could believe that blackface could be empowering… Spike Lee deals with this specifically in Bamboozled, which has a frustrated TV producer come up with the most offensive show he can think of to put on TV, a minstrel show, so he can get fired (so Mel Brook’s Producers scenario but with TV shows, essentially), and the show is a hit, and it is far from empowering, despite being a black produced and directed and acted show. The whole point is that minstrelsy is inherently degrading, because it’s specifically based on false stereotypes that make white people feel okay with segregation and second class citizenship for their fellow citizens. 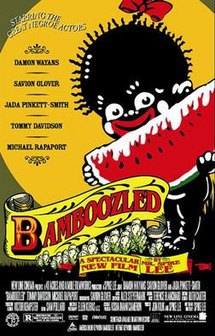 Bamboozled is a 2000 satirical comedy-drama film written and directed by Spike Lee about a modern televised minstrel show featuring black actors donning blackface makeup and the resulting violent fallout from the show's success. It features an ensemble cast including Damon Wayans, Jada Pinkett Smith, Savion Glover, Tommy Davidson, Michael Rapaport and Mos Def. The film was given a limited release by New Line Cinema during the fall of 2000, and was released on DVD the following year. Critical rec...

I feel like Canadian politics lags behind American politics.

Leads and lags, depending on opportunities. The Republican manipulators would have been happy with an unlikeable Stephen Harper type who would quietly do all the racist, anti-Science, anti-environment, court-packing, etc, stuff they wanted, but instead of Ted Cruz, they drew the poison wild card.

I see Harper as our Bush. It’s just that thin veneer of respectability is very important to Canadians, I think.

“Please forgive me, baby, I promise you that I will never do it again.”
– Any abuser before they do it again.

“You should forgive him, honey. For the sake of the children.”
– People perpetuating the cycle of abuse.

Part of my shock that Trudeau’s “Arabian Nights” photo was from 2001 is due to my belief that he should have been aware of the issues pertaining to blackface particularly because it was a year after Bamboozled had come out. I’m probably wrong, as I was just a young adolescent at the time, but, in my mind, awareness of the hurtfulness of blackface was in the zeitgeist* because of Bamboozled. What a great, but very sad, movie.

* Obviously, awareness of that pain was always in the zeitgeist for the people who feel it.

FFS, mass incarceration, police violence against black Americans, subtle forms of racism, the concentration camps on the border, the murder of black trans women… all of these are real things happening to real people, and they are related to racial structures in our society. If we don’t attend to the specific issues, we only sweep it under the rug. This is exactly what the Cubans did. Officially, racism is over, but if you go there and see what’s actually happening, it’s crystal clear that Afro-cubans are still second class citizens because of their skin color.

Not being a historian, my take is that racism didn’t end with the end of slavery in UK/Europe. The British and others simply traveled elsewhere to do their oppression.

I think he’d also be a good analog to Dick Cheney. Harper got his start being more a backroom right wing intellectual, and they both have that permanent sneer thing going and lack of warmth or social charm.

I don’t know how big that movie was in Canada, but it had it’s share of critics here. If one had seen it, it’s entirely obvious that blackface is something deeply offensive. I suppose some people can identify with the white executive producer (played by Michael Rappaport) who thought it was a brilliant idea for a show, but he’s clearly not the character that you’re meant to be sympathetic to… Frankly, it’s one of his movies where none of the characters are entirley sympathetic… maybe the guys they get to star in the show, played by Savion Glover and Tommy Davidson…

my take is that racism didn’t end with the end of slavery in UK/Europe. The British and others simply traveled elsewhere to do their oppression.

I think that’s accurate, but if you follow along with the core-periphery model of Immanuel Wallerstein, that racism is also produced in the colonial core for the core subjects, bringing them into the colonial project by allowing them to feel civilizational superior to the colonized subjects in the periphery…

Also… remembering from Doctor Who, that the colonial core was not nearly as lily white as we like to imagine.

“If only it were all so simple! If only there were evil people somewhere insidiously committing evil deeds, and it were necessary only to separate them from the rest of us and destroy them. But the line dividing good and evil cuts through the heart of every human being. And who is willing to destroy a piece of his own heart?” Alexander Solzhenitsyn