Vince Gilligan already has a Better Call Saul follow up

This is good news. Two things I really like about BB/BCS:

(It helps that they’re well-written with compelling plots and characters too, natch.)

Is it called “better text Saul”?

At this point, Vince Gilligan could make a show about anything and I would watch the hell out of it. And I mean anything.

I can just imagine some studio exec thinking there should be a sequel to Better Call Saul.

Gilligan’s new show won’t exist in the Breaking Bad universe and will lean more heavily on his roots in science fiction.

Why not both? I have been eagerly awaiting the return of Cyborg Fring.

Fring was always a cyborg.

Whereas Hank eventually relocated to Mars under the Federal Witness Protection Program but the radiation proved even worse than the New Mexico desert. 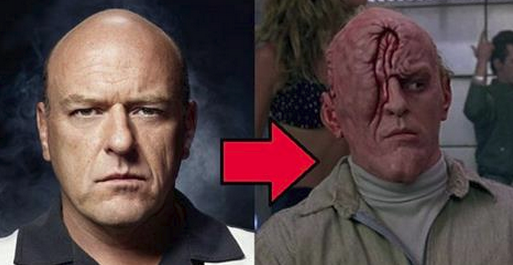 The cinematography. Every scene is a masterpiece.

I mean, I agree, but it’s become a running joke in our home now of “Oh, I bet he’s going to put the camera under/in… yep, there it goes”

This is timely news. I’m rewatching BB for the fourth (fifth?) time. It holds up so well. Every big moment still punches, even when you know the plot twists by heart. I see new subtleties in the character development every time. Aaron Paul does some incredible silent face acting that it took me many watchings to appreciate. I just watched the scene where Fring kills his top lieutenant with a box cutter right in front of them to make a point and the look of absolute rage that Jesse gives him (entirely in his eyes, no less) is amazing.

I would love another show in the BB universe, but I can understand Gilligan wanting to move on. I won’t miss the obligatory “Mexico is yellow because it’s a third world shithole!” colourizing that is such a racist Hollywood cliché, though.

Don’t have time to google a pic

a second prequel, where the actors are all 25 years older than their characters and everybody pretends that’s not weird

It is science fiction.

The Lone Gunmen tanked after one season

They couldn’t even do this one at all now, the premise wouldn’t make any sense

“It’s these three guys, they’re like vigilantes or something, and their superpower is they know how to talk to other random people on the internet”

Aaron Paul is unbelievable in that series. Especially considering that he never took a single acting class and still won an Emmy.

I feel like Breaking Bad fans like to give Cranston all the praise, but Paul’s performance throughout the series is the bonding agent that keeps the series together. We can only truly appreciate Walt’s transition to Heisenberg because of Jesse’s growth as a character.

I got a little tired of the “they hate each other and they’ll never be friends again…for three episodes,” shtick they kept pulling every season, but outside of that, Cranston and Paul play so brilliantly off each other.

Gilligan’s new show won’t exist in the Breaking Bad universe and will lean more heavily on his roots in science fiction.

I had been hoping for a Better Call Huell.

I got a little tired of the “they hate each other and they’ll never be friends again…for three episodes,” shtick they kept pulling every season, but outside of that, Cranston and Paul play so brilliantly off each other.

Haha, yah, especially when binging. It was less noticeable when it was aired live because there was a lot more real time elapsed, but if you binge it, they break up and make up seemingly twice per evening.

I like how Jesse and Skylar form different aspects of the conscience Walt is missing. He’s a psychopath, but Jesse is the heart and Skylar is the humility & maturity that he’s missing.

I like how Jesse and Skylar form different aspects of the conscience Walt is missing. He’s a psychopath, but Jesse is the heart and Skylar is the humility & maturity that he’s missing.

I’m an unapologetic Skylar fan. I’m mot sure why so many people hate her.

Scratch that, I do, know why, but I just think it’s a silly reason. Just because Walt is the protagonist people immediately identify with him and project positive intent on his actions. Walt is a compelling main character, but I never found him “likeable” at all.

I’m an unapologetic Skylar fan. I’m mot sure why so many people hate her.

The hatred of Skylar was a very clear toxic masculinity and incel backlash. The fact that Anna Gunn herself got actual threats says it all. Just for playing a character they didn’t like. A lot of manbabies think Walt is the hero of the piece, fulfilling all their power fantasies. Viewed through that lens, Skylar becomes his foil, always trying to be a pesky reasonable adult and actually caring about that pesky family of his. Walter is a psychopathic monster, and there’s a culture of other psychopathic monsters out there who worship him. Of course, by this standard Jesse is a foil too, but he’s a dude so he gets a pass.

When you look at the series from Skylar’s POV she’s a pregnant, forty something woman with a disabled child, crippling debt, a klepto sister, a brother in law in the DEA, and a husband with cancer that keeps lying to her.

Whenever I’m on reddit and I see fans say, “She should have just been cool,” or some variation of that hogwash, I know I’m dealing with an emotional infant. When Skylar finally slashed Walt with the knife, I literally stood up and cheered. She was an incredibly flawed character as well, but I was waiting SEASONS for her to stand up to Walt.

The phenomenon isn’t only tied to Walt, though. I always roll my eyes at the “this character is literally me,” section of any fandom.