Wall Street Journal reports on Bigfoot, complete with one of their iconic "hedcut" portraits

Originally published at: Wall Street Journal reports on Bigfoot, complete with one of their iconic "hedcut" portraits | Boing Boing

Eh, why not? It’s a big world, and I can understand creatures that want to avoid us at all costs. It’s not like human contact has ever worked out well for any other species on this planet.

And at least Sasquatch believers are of the “mostly harmless” variety.

In 20 years time, we went from video cameras being rare, expensive, unwieldy, and intermittently operational to 95% of Americans having a high-quality auto-focus video recording device that can record with a single swipe of the thumb on their person at all times. In addition, flying camera drones are inexpensive enough to be hobbyist devices for many Americans. As a result, the internet has been flooded by videos of people and animals doing amazing things that were captured because someone had a phone on them. In the same period of time, there have been zero new compelling videos of Bigfoot. If they existed, we would have the evidence.

Also, we can literally pull DNA out of the air and do animal surveys. They don’t exist.

Huh. I thought headcuts were supposed to be made of sharper elements, and more imitative of currency. Either the black ink is deposited, or it is not. Using greys destroys this illusion.

Oh well, the web rarely knows what to do with engravings.

This is the answer. I don’t care how mind blowing the “primate nest” looked. Unless there was unidentifiable hair or better yet DNA found in it, it’s a hoax or was created by a known animal.

Canadaland had a good episode about the historical origins of the Sasquatch from the Coast Salish and how settlers have stolen and warped the idea of Sasquatch. It’s a sadly common story of cultural appropriation.

Here’s a link to the show and some explainer text: 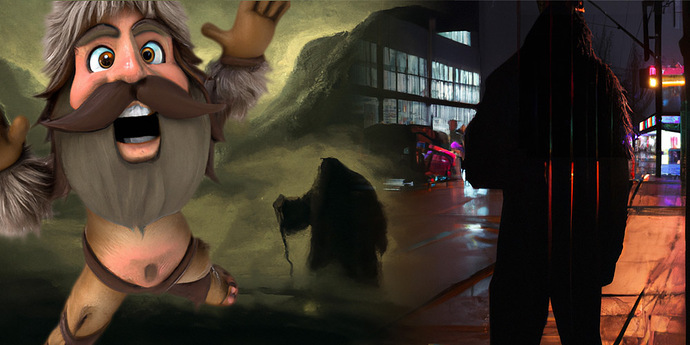 How Sasquatch was stolen

And how the Coast Salish people stole it back

On the previous story about “antediluvian civilizations”, I wanted to say that this sort of thing was not what I came to Boing-boing for. It was a lot of “woo”. The best way to put it, for me was to say that stuff was Bigfoot-like pseudo-science. That’s the first thing I thought of to say. I didn’t bother to post as that was not contributing to the conversation. A little while later, here’s bigfoot.

Bigfoot and the Loch Ness monster are fun stuff, but when you start saying they’re real, you lose me.

Why not? Because Bigfoot is big! There’s just no way a mammal that big would have evaded all observation/detection for hundreds of years (oh, except for grainy super-8 film by “lucky” hiker).

Huh. I thought headcuts were supposed to be made of sharper elements

Dude, it’s Bigfoot, the image is going to be blurry and grainy, even in a WSJ hedcut.

I’m mostly just tired of people arguing about stupid things. You wanna believe in Bigfoot? Fine. As long as it’s harmless to society, you go ahead and believe in him – put bumperstickers on your car, Bigfoot-shaped-truck-nutz, outlines in the woods, have fun with it. You don’t want to believe in Bigfoot? Also fine. Just be nice to people who do – it’s not worth a fight.

They’re not ALL harmless… This guy turned out to be a bit toxic.

A candidate's fascination with Bigfoot is becoming an unlikely issue in a competitive congressional race.