I don’t know if jet fuel can melt steel beams, but I bet given enough time, Coke Zero could.

One weekend in early September, I went to a sushi place with friends, and someone ordered a “Patriotic Roll”. It arrived as two stacked up rolls with “9/11” written on the plate in eel sauce.

It’s a display at a Walmart. It’s inherently going to be about commerce, not patriotism, remembrance or anything else… Were people upset because it was made out of coke boxes - or because it existed at all? Because its mere existence was pretty grotesque.

That is pretty bad.

These profound moments sure bring out the thoughtful judgement, good common sense, and impeccable taste for which American enterprise is renowned…

Mecca-Cola is a cola-flavoured carbonated beverage. The flagship product of the Mecca Cola World Company, it is marketed as an alternative to U.S. brands such as Coca-Cola and Pepsi-Cola to "pro-Muslim" consumers. The product's name contains the traditional Latin-alphabet transliteration of مكة, "Mecca" in Saudi Arabia. Mecca-Cola was launched in France, in November 2002, by Tawfik Mathlouthi, as a means of aiding Palestinians by tapping into demand for alternative products in European countrie...

We’ve been letting politicians throw it around for just about any reason they feel like for a while now. I’d say this display is far more respectful of the event than they have been.

Well, W did say that the best we we all can fight ‘terror’ is to go shopping.

BEAT ME TO IT!

I don’t see the big deal with this display. We throw the flag up on everything imaginable, revolutionary and civil war things on the same. I guess we have to wait another 100 years before we can have 9/11 gum and napkins.

Because its mere existence was pretty grotesque.

There should be no referencing outside culture in our halls of commerce.

I understand such displays are often the work of the supplier (i.e. Coca-Cola) and not the actual store – though I suppose the store at least has to approve it.

Well, W did say that the best we we all can fight ‘terror’ is to go shopping.

If Bush had been there when the Walmart employees took down that coke tower he’d have used it as an excuse to invade Target.

Did Pepsi try to fly a plane into it or something?

How dare they sully the great name of COCA COLA with references to 9/11 ?! OUTRAGE!

Imagine what will happen when someone tries to take a carton of Coke Zero from the bottom of one of the towers to put in their cart.

I don’t get it. What’s “grotesque” about it? A bit tacky perhaps, but I really don’t see any problem with a display like this. Some people just like to be outraged at something all the time I guess.

I was going to say something and then I remembered seeing “Heroes of the Alamo Bottled Water” once in San Antonio and then realized America has no tact.

The idea that the Coca Cola corporation would ever try to use patriotic sentiment as a way of selling beverages is just offensive. 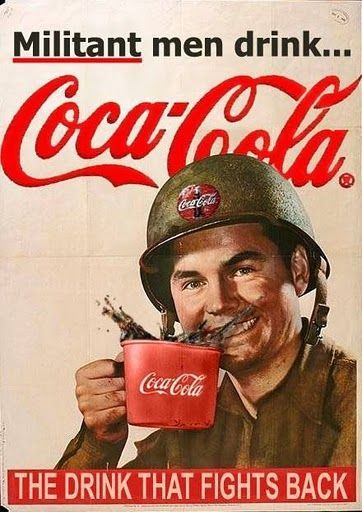 Not offended by this any more than staged reunions at sporting events or any of the rest of this type of nonsense.

While not offended I would try and get a friend to join me in dressing as a hijacker and we could crash in to them with shopping carts several minutes apart.