Watch a brave kitty defend itself against a hungry coyote

Originally published at: Watch a brave kitty defend itself against a hungry coyote | Boing Boing

Poor terrified kitty, this is why when I get a cat it’ll be indoor-only. That and the threat the little fuzzbutt would present to small wildlife.

ermmm… is that video action being kept in-frame by a human being (equipped with empathy)?

The time/datestamp overlay from what I assume is a CCTV system doesn’t appear to be moving relative to the scene, but is moving relative to the video’s edges, so I think that the camera is static; but someone in the thrall of the demon of vertical video has voluntarily gone through and cut out a little vertical sliver from a larger original because they hate context or something.

It’s not absolutely conclusive; but in the context of a system that overlays a timestamp like that you’d expect the timestamp to remain static relative to the edges of the video but move relative to the scene if someone were PTZ-ing the camera in real time.

(Edit: it could also be an automated system doing the slicing, it’s certainly quite common for CCTV systems to do motion detection; and it wouldn’t be a huge surprise if some of the consumer focused systems treat output to a phone as a first-class use case and format their motion-trigger excerpts accordingly. Someone much more familiar than I with the consumer tier ones might even be able to take a guess at the vendor, if they have different stylistic choices around pan speed and zoom aggressiveness and the like, not sure how much variation there is.)

(edit the second: or I could not be a total fool and notice the “EZVIZ” watermark in the top left of the video; which would, surprise surprise, offer some insight. Based on the perspective it’s probably not one of their doorbell-cam offerings(too high, relative to the doorknob and railing for that to be likely); and based on the abrupt transition from IR night vision to visible light spotlight(footage starts greyscale, contrast goes nuts about a second in, then the system switches over to full color) it is presumably one of their models with “Smart night vision” mode; and given that there’s audio it must be one of the models with at least one-way audio. Video resolution is 608x1080; so probably one of their 1920x1080/2MP models, not the 2k or 4k ones. No sign of the camera itself moving, just the 608 pixel sliver; so probably one of the fixed models rather than the PTZ ones. C3N maybe?)

I assumed this was a security cam at first but now I’m wondering why the fuck who ever filmed it didn’t go and try to save their pet?!

That someone intentionally converted this video to portrait format utterly confounds me. I swear to god there’s at least one entire generation that thinks the world should be filmed and viewed in portrait mode.

How long until installing TVs in portrait orientation is the norm? 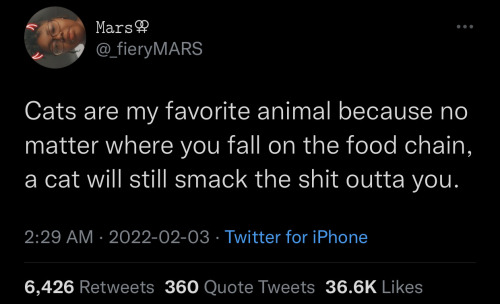 Another reason why one should never declaw their kitty.

Its because people watch stupid videos on their phones - that’s why it has taken over as a format.

That was a lucky cat. In the end, it was only the fact it had something to climb on that it escaped.

Yeah, keep your cats indoors if at all possible. Especially if you live near wooded areas. Cats are coyotes’ favorite treat.

My preference would be square screens everywhere, but the growing consensus does make sense, which is that the kind of videos you look at in a scrolling view should be in portrait format, while sit-back videos like TV and movies should be in a wide aspect ratio.

Off the top of my head I’m not sure if (say) Instagram even has a desktop version –certainly no one uses it – so posting landscape videos there would be objectively perverse, like eating a filet o’ fish with a fish knife and fork.

I’m the guy who posts in Instagram in landscape when it’s applicable to the subject matter. Just because most people use their magic rectangle wrong doesn’t mean that I also have to.

But yeah, I get your point. Once something passes the threshold of wide adoption it’s hard to fight it. Like people writing “would of” or “could of”. When the day comes that’s accepted as allowable grammar I’m going rogue.

That was a lucky cat. In the end, it was only the fact it had something to climb on that it escaped.

It was lucky in the video - the coyote ran into the yard just a moment before the cat lost it’s grip and fell… into the same yard.

This is a cruel video.

always. No one else should have to deal with someone’s choice to keep a cat.

I assumed this was a security cam

And a very secure ‘cat’

Legend status achieved.Level up to another nine lives.

Seems like a motion activated camera, which is why it pans away when the cat is gripping tightly to the post, then comes back (with the uninteresting part edited out) when the cat decides to come down.
And it does seems like the cat sees the coyote leave before trying to slide down, ultimately giving up on the slide, and dropping to the lawn. He was pretty shaky, but I think he could have stayed longer if necessary.

My dog watched this video with me and laughed at the coyote. “Doesn’t he know that cats taste sharp? He is not a very smart doggy. Where is his ball? Someone should throw him a ball because balls are life.”

I hope the local birds have as much luck escaping from that cat. Please keep your cats indoors. It’s good to see the cat get away… but that cats was also fair game once tossed outside. Our back yards aren’t our living rooms.