Watch: A pair of lynxes arguing in Ontario

Originally published at: Watch: A pair of lynxes arguing in Ontario | Boing Boing

Still not certain if mirror. Will yell again…

Not lynx. Zax. And this was on BB three years ago, when I made a similar comment. Two displeased lynx have a screaming match with each other | Boing Boing 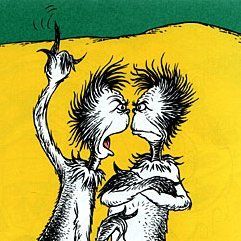 It doesn’t even sound like that! It’s like one of those videos where people make human-sounding noises synced up with animal videos for humorous purposes.

That was my Dear Wife and I last night, who gets the last slice of pizza always brings it out.

We’re in the process of house breaking a feral cat we’ve been taking care for 3 years outside. We have 4 other rescues in the house that range in age from 9 to 12 years old. We’re introducing them one at a time for brief encounters.

I swear that’s exactly what we heard last night when we let two of them get together. No fighting, just very vocal.

I continue to insist that the correct plural is “lynges”.

We’re trying to integrate a stray into the clowder (3 cats isn’t enough to constitute a colony) outside without screwing up the dynamics. Little Brother is currently the senior, but Cassius, the noob, is constantly arguing with him, although it rarely gets beyond a yelling match.

This classic video makes my laugh until I cry every time I see it.

I needed that, thanks!

Maybe they’re arguing about who is the most sorry. It is Canada.

A pair of lunging lynges?

Look at the amazing feet on those kitties!

All I can say is, I’m damned glad they aren’t outside my house at 2am making that racket!
Gotta say, though, the almost synchronised not-quite head-butting is amazing to watch.
And those feet!

“A pair of lynxes arguing in Ontario”.
is that what it is called? I would have logically thought they argued in Lynx or Lynxinese or some other feline dialect (Linux?).
cool. can I get Ontario lessons on Babbel?

Agreed! A lynx screaming below your window at 2am is a butt-puckering way to wake up ^^’ .

“In challenging a kzin, a simple scream of rage is sufficient. You scream and you leap.”

If only human beings would resolve their differences in such a manner. I would pay to watch two inebriated bar patrons engage in a synchronized yelling exercise such as this. No need for fisticuffs, just see who tires out first.

So you’re saying this is a catfight that should be moderated by a Jerry Springer Spaniel.

I was able to litter box train a feral/semi feral, but it did take a while. It was so rewarding to see what started out as a wild animal become a loving, head-butting unit of a boi.