I’m pretty sure there’s a yogurt joke to be made here, but I… I just can’t.

Related: https://www.youtube.com/watch?v=7ou6MoKmxFQ
(Link is as nsfw as the video above, essentially a remake of it. The song will also get stuck in your head for approximately forever.)

Knew what this had to be before clicking on it.

I thought it was the movie Offbeat from the still. Will have to watch it again to see if it was a terrible dance/aerobics bit too. 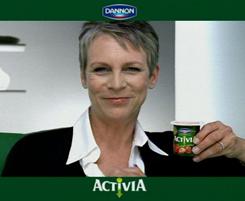 And now she pitches poop yogurt.

If she still gyrated like she did in the video, maybe she wouldn’t need it.

Anyhoo, it would have been ten times better if Travolta wasn’t wearing a saggy diaper.

@Carla_Sinclair: Damned straight the 80’s happened, and it was all very weird at the time. Now it all looks surreal.

I want my two dollars!!

The thing about the 1980s is that stuff like this only happened on screen. I know of no one back then who dressed like this. Then again, I was in Iowa for most of the decade, with only a year in LA County.

Then again, I never was in a fitness studio, as jogging was my sport. And yes, running shorts were that short. All athletic shorts were.

We had a p.e. instructor at our elementary school who had joined the jogging craze sweeping the nation in the early 70s. She was the first person I ever knew with a fitted, stylish track suit with stripes a la Charlie’s Angels.

We had a music teacher who often wore a Hang Ten jogging suit to school. She may or may not have actually been a jogger.

The P.E. teacher used to make us line dance to “Hey Nineteen” and “Rock with You.” Following this experience, many years passed before I liked Steely Dan at all, although MJ’s Off the Wall grew on me a bit sooner.

(Both of these were 1980-81, several years before this movie came out, but maybe right after the source material appeared in Rolling Stone.)