Watch: Bear makes off with trash from bear-proof trash bin

In the end, the thieving bear made off with a fine bag of treasure, er, trash, along with three bear cubs that had been learning the craft from the sidelines.

This is a sad video to me since it means those four will likely be marked for death.

Maybe bear-proof is an animal rating, like proof in alcohol? As in, if you can make it into this, you are totally bear?

That just looks like a regular trash bin they probably put lock hasps on. It needs to be immobile, at least, to be bear proof. As evidenced in this video, if a bear can smash it around, it will eventually give way.

I was struggling with this issue earlier in the year in our new home that borders 600 wild acres. As soon as hibernation was over we got hit twice by bears. I looked into the options and none of them were feasible for trash pickup service (and no, I’m not getting up at 4 am to roll bins out that have been smelling up my garage; that’s a non-starter). I finally found a recommendation to just dump some ammonia into each trash bag and inside the bin. So far, they haven’t been back once. We’ll see how it holds up next spring when they’re really hungry.

it means those four will likely be marked for death.

Not sure how it is in other places, but here in the Hudson Valley, bears are a constant presence and the attitude is that it’s your fault if the bears get into your shit. The DEC will go to great lengths to not euthanize a bear. And they will fine the crap out of you for negligence.

Information about techniques to prevent attracting bears around your home and while camping.

Apparently, the ammonia trick is one of their recommended mitigation strategies. I hadn’t actually seen this page before today.

It’s one of these. You need to push down a plunger on the release mechanism on the lid of the can to open it. When the bear flipped the can upside down, that was what released the lid.

Toter's Bear Tough Cart has received a Three Star rating, the highest rating given by Living with Wildlife. Find Out More

Edit to add: @Brainspore What makes this video sad to me is that bear and her cubs will soon have a belly fully of plastic food wrappers and other (literal) garbage. If not euthanized, they will likely die a slow and painful death from intestinal blockage or ruptures to the intestinal wall from glass, metal, or other nondigestible objects. 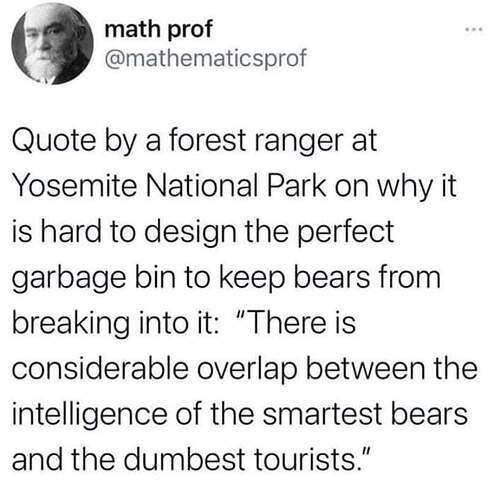 When the bear flipped the can upside down, that was what released the lid.

That does not seem well thought out. It’s clearly trivial for the bear to defeat it with minimal effort and it was a 100% failure. I’ve never seen one here (high bear pressure area) or in the Adirondacks (bears are already in your house watching TV area). I do see plenty of hard boxes bolted into concrete and such, but I’ve never come across one of these.

While not perfect, these cans are still able to be opened by mechanical trash trucks. I think that’s their appeal. Other methods like you mention require humans to open the bins and manually toss the trash in. I have no love for the cans… just pointing out what the were.

Yeah, I get what you meant. I looked into stuff like this and they were all either a) easily foiled in real-world cases or b) not suitable for curbside pickup. The ammonia thing worked best by being a simple deterrent instead of a fortress. Ammonia stinks. Plus the Littlest Peas diapers probably help a bit. We’re lucky to be urban enough that our garbage is less appealing than if we lived a few miles west in the real mountains.

ETA: One of the options I considered was a bin like this with a rack of some sort that would immobilize them but they were too damn expensive and I couldn’t envision a rack that would hold them securely enough without making the trash truck pass us up. Two week old trash is radically worse than one week. So far I’ve spent less than $10 in ammonia for the year.

I camped in New Mexico a lot when when I was a kid. Every two years, there were new designs of “bear-proof” garbage receptacles in the state parks. Every morning we’d find at least one with the door torn off and garbage scattered around it.

If this hadn’t been posted already (and honestly, I don’t know why it wasn’t the first response), I’d have done it myself!

There’s always one cnut who spoils it for everyone. Always.
As soon as that red pickup drove up you just knew…