I’m a believer. After watching this film I bought the companion book along with a few others. 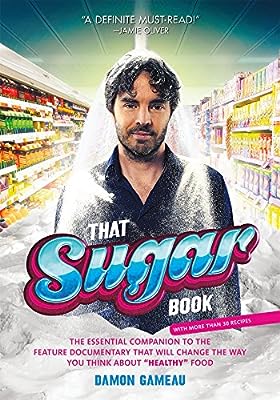 That Sugar Book: The Essential Companion to the Feature Documentary That Will Change the Way You Think About "Healthy" Food

The essential companion to the feature documentary, That Sugar Film, this is an explosive exposé on the dangers of sugar. When filmmaker and actor Damon Gameau set out to uncover the truth about the s ...

I think the science is just now coming to the forefront with more and more studies coming online that confirm the hypothesis that high sugar intake is far more damaging than previously known. A calorie in does not equal the same calorie out when sucrose/fructose is involved.

This past year I’ve cut out as much sugar as possible - no soft drinks, no juices, no fast food, limiting fruits and only preparing homemade “real” food - lean meats and lots of veggies. Result is I’m 25 lbs. lighter and much healthier overall. Hypothyroidism has reversed, blood pressure is down and resting heart rate is in the mid-50’s (I also workout 3-4x/week). Overall I just “feel” healthier - not so tired and run down anymore. The difference is striking.

One of the more interesting ideas presented in this research is the concept that my liver is no longer processing and storing so much insulin and after 6 weeks or so it will “heal” and start functioning normally again. I’m like that annoying ex-smoker who becomes the anti-smoking crusader. Now I’m an ex-sugar evangelist.

I dunno, fruit is loaded with sugar, but I never heard of anybody getting fat from oranges.

They actually address this issue in the documentary.

Eating one or two oranges (or bananas, apples, etc.) is no big deal - your body can deal with it just fine. But concentrate that juice into a bottle and you’re actually “eating” - in liquid form - a dozen oranges or more. It’s like forcing yourself to eat an entire bunch of bananas in one sitting - you’d probably make yourself sick instead.

Plus your body expends energy by digesting the fruit which helps to offset the caloric intake and spread out the sugar uptake over time. Fruit juice is like mainlining the sugar directly into your bloodstream without any of the offsetting benefits.

Makes sense. My only point is that sugar all by itself couldn’t be the whole problem, or else apples would kill.

Well if you ate enough of them they would.

You would probably need around 400 bananas a day to build up the kind of potassium levels that would cause your heart to stop beating - http://www.bbc.co.uk/news/magazine-34225517

You have been warned.

Seriously though if you’re asking ‘can eating a lot of fruit have the same kinds of effects as eating other sugary foods?’, then yea, kinda. The main difference is that 200 calories of apples contains a lot more goodness than 200 calories of twinkies - but they’re both gonna rot your teeth.

Sorry to say, but the movie seems mostly to be quasi-scientific crap.

Don’t Believe the Shoddy Science in That Stupid Sugar Film

One of the most popular family films in America right now, if you go by digital sales, is an Australian documentary about sugar. Made by actor Damon Ga ...

Another great documentary on this subject is Fed Up. What it comes down to is that eating fruits is different than drinking fruits because of dietary fiber. The dietary fiber helps regulate insulin spikes. The problem with a lot of processed food that claim to help in weight loss is they tend to be for low fat diets (especially if it doesn’t contain an artificial sweetener), which means they replace the fat with sugar…which turns into fat. Thus becoming a vicious dietary cycle that is doomed to fail.

That is not to say that exercise and watching caloric intake don’t play a factor, but the food industry’s stance has always been that it isn’t their food that is making you fat, you are just a lazy piece of shit that needs to get off the couch more often. The biggest lie perpetuated by the food industry is “calories in, calories out.”

Yes, came here to say that too. Not sure I need to see this doc, since Fed Up has already convinced me that sugar (in the excessive amounts that so many first-worlders consume) is poison. The parts of that movie about Michelle Obama’s industry-squelched efforts were infuriating, almost heartbreaking.

Seems to me that that review spends a lot of time attacking the messenger, and too little addressing the validity or not of the film’s core claim, that most westerners are harming themselves by consuming too much sugar. I haven’t seen it, so I can’t be sure if it uses a lot of woo or not to back up the claim that eating and drinking a lot of sugar (that is, as much as most westerners do) is bad for you, but I can say that Fed Up convinced me of that. And none of its experts struck me as sellers of woo.

Couldn’t you just use a sugar-sniffing dog?

Find that stash of snickers and skittles. Only to wait until the kids are asleep to partake in the Devil’s snacks.

Is it any surprise that sugar is bad for you?

Fed Up is excellent - much better than That Sugar Film actually. It’s available on Netflix streaming BTW.

Admittedly this guy’s film is a bit gimmicky in that it’s basically a rehash of the SuperSized documentary about the guy eating nothing but McDonald’s, but the conclusions are basically the same as a lot of scientific research that’s coming out now on the effects of a high sugar diet.

http://www.sugarstacks.com is a good place to visualize just how much sugar is in everyday foods. It’s pretty eye-opening.

Another good resource for latest scientific research is http://www.sugarscience.org/.

You’d need to eat almost 2 lbs. of carrots to equal the same sugar in a package of Twinkies.

We knew that, same with everything else.

What I’m concern about is weither or not Sugar is the food equivalent of nicotine.

Well you know what love is right?

But concentrate that juice into a bottle and you’re actually “eating” - in liquid form - a dozen oranges or more.

But oranges are mostly water to begin with. Juice is concentrated as a commodity (FCOJ for those of you who are Trading Places or stock ticker fans, or that bizarre nexus of both) but is reconstituted with water and doesn’t remain truly concentrated because dollar signs look a lot like water. It’s not like when you juice an orange the nutritional value magically changes. Concentration utterly removes the flavor, but that’s another issue. If they’re adding sugar, that’s one thing, but don’t tell me that nutritional values are substantially different. A lot of the solid bits of an orange are indigestible to begin with.

Look, I’m not going to pretend that excessive intake of carbohydrates can’t lead to health problems down the road, but every time I watch one of these films, I’m disappointed by the histrionics, which tend to occupy more of the runtime than actual science. Time and time again, people look to something “hidden” in their food that is slowly killing everyone. I get it, it’s a compelling story. But frankly, “maintain a balanced diet” doesn’t sound like a great premise for a film and is probably a more accurate message.

I’ll watch this one of course, I have an odd fascination with this genre. I’m already doing homework assigned by another user on the BBS for Fluoridation, so I’m a little busy, but I’ll come around to this one.

[Edited to add and not take up another comment]

Seems to me that that review spends a lot of time attacking the messenger, and too little addressing the validity or not of the film’s core claim

Engber is a good science journalist and is actually very conservative about reporting research. He does take on the credentials of “experts” in the beginning of the article, which I don’t view as irrelevant, but the second page of the article discusses the literature he found on the subject, so it’s not entirely about the people who made it. Either way, I’ve found the quality of his science reporting to be rather good in the past, and I think that his article is pretty sound.

Checking how many chemistry geeks there are on BBS?