can’t say that i miss arizona one iota.
especially don’t miss the haboob

Yeah, there was crazy wind at my home in Gilbert. It was strong enough to almost entirely peel off the roofing membrane from my back patio. It would have completely done so and then started peeling off the house shingles but I got to it in time and stabilized it. I wouldn’t have thought that it was even possible to blow that hard short of a tornado or hurricane!

Also: creep along as you might, but the “Why can’t you fools pay attention to the frequent PSAs” and

even in a relatively modest haboob.

I’ve been in some where I couldn’t see the front of my own car, FFS.

Doesn’t look any worse than when I5 in the California Central Valley gets fogged in and visibility drops to about 20 feet. Pretty scary when you’re worried about rear ending someone traveling really slow in front of you and getting rear ended by someone speeding behind you.

can’t say that i miss arizona one iota.

Some people love that weather, you know.

When you’re really lost in the storm…

My favorite memories of AZ, leaving the widows open [at home] while a haboob/sand storm dumps tons of dirt/dust into your home.

Came here to make sure this got posted, thanks.

I had Fury Road queued up on to play, so I blipped to the “entering the sandstorm” part and let the music play while watching. It makes the traffic jam much, much more epic.

When I lived in that hellhole years ago it was easy to identify the newcomers since they never stopped when the dust storms blew. They were the ones with the sandblasted headlights., windshields and paint jobs… 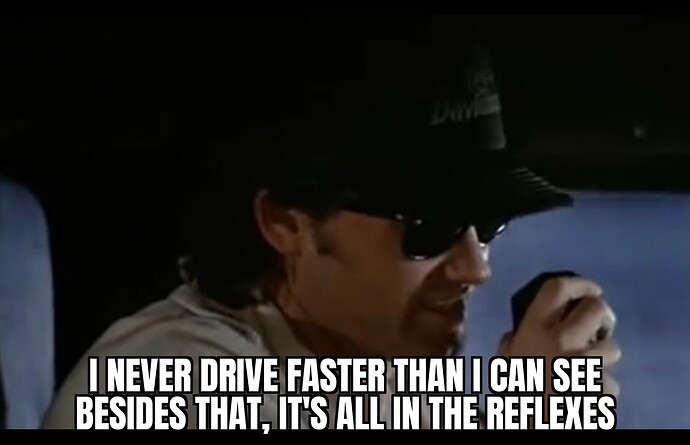 Man, looks almost like a blizzard, but with more sun blearily peering through the screen of particles. Wild.

It is a blizzard- a dirt blizzard, and it’s stupidly dangerous to drive in that crap. (along with the damage to the car’s finish, it’ll also do a number on the air filters for the engine and the cabin.)

I lost part of a shingle off my roof from it yesterday; I’ve not bothered to dig out the ladder to see where it came from, although I’m going to need to do some repairs to it later this year as the temperature gets back down to a point where I won’t instantly heat-weld myself to the roof when climbing up there.

Wouldn’t the right thing to do be to shut down your (internal combustion) engine? There gotta be billions of particles making their way through your air cleaner ready to sandblast your precision machines valve clearances and cylinder walls. And everything else.

I5 in the California Central Valley gets fogged in and visibility drops to about 20 feet. Pretty scary when you’re worried about rear ending someone traveling really slow in front of you and getting rear ended by someone speeding behind you.

I got caught in something like that on 1-505, west of Sacramento decades ago. Man, it was scary, exactly as you describe. I had to decide if I should just pull waaay over and stop and wait, or just inch along to get out of that fog bank. There were people who were just roaring right through it, maybe I was in the emergency lane so’s not to get hit. But after some minutes, I did exit that fog bank unscathed. Man, that was scary!

I remember my first one, it was exciting. Though it wasn’t head-on – more of a side haboob.