Originally published at: An 18-year-old activist tweets a video of MTG kicking her | Boing Boing

She’s going to get a face full of mace one day and it will be hilarious.

I’ll settle for an assault conviction and 90 days in the pokey.

The people who want guns everywhere: brave heroes and patriots.

The people who don’t need a gun to feel safe going to the grocery store: cowards.

The equation doesn’t quite balance.

I find comfort in the fact that this is what her life is like. She deserves every bit of the unwanted attention.

I’d love to never hear Empty G’s name again, but if you walk in front of someone and slow down, you can expect a flat tire. This one was clearly on purpose - she looks down to make sure she catches the heel - but I wouldn’t call it a kick.

I think she enjoys the attention, no matter where it comes from.

True, but over time, the attention will become better known as shame. She just doesn’t know it yet.

I’m still waiting for the FBI to investigate if she was the DC pipe bomber. If you compare the videos of the bomber’s demeanor and stature to hers, you might think she’s one.

My current plan is to never watch another MTG video until one surfaces of her slipping and falling into a puddle of mud, or pile of manure at a state fair.

I’ll make an exception for one of her yelling at someone so heatedly she walks full speed into a light pole.

the rights of parents to defend their children in schools.

How can someone utter his phrase without thinking that something is desperately wrong? Schools are supposed to be places of learning, not fortresses to be defended.

Or comically stumbling into a wood chipper.

The people who want guns everywhere: brave heroes and patriots.

They don’t want guns everywhere though. 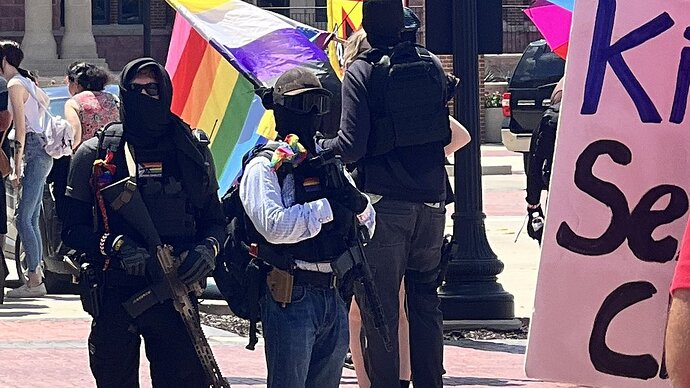 Texans suddenly scared of guns when they're used to protect Drag Queens Story...

Fox News warned of “armed Antifa members showing up at ‘kid-friendly’ drag show — ‘They want to intimidate.'” The Daily Mail called it “terrifying.” The Wa…

So if the solution to gun violence is more gun violence, then we should align all the rest of our laws concerning violence accordingly, so that it boils down to:

That bodyguard, in the blue suit, appears to be reconsidering his life choices.

the rights of parents to defend their children in schools.

How can someone utter his phrase without thinking that something is desperately wrong? Schools are supposed to be places of learning, not fortresses to be defended.

Not to mention, the last time ‘parents tried to defend their children in schools’, they were thwarted by cops from doing so. And one of those parents was a cop…
It should surprise no one that Cancun Cruz’s [non]solution is more cops!

Yeah, as though having 600 cops standing around doing nothing productive is somehow better than 450 useless cops.

And still not even considering the fact that this is not a top-level concern for any other developed country in the world. Just needing to have the conversation is batshit crazy.

To paraphrase House (I think):

If a Republican could feel shame, there wouldn’t be any Republicans.

I wonder if MTG had ever been kicked in the head by a horse… or eight.