Weight works better than volume for my baking

A million times, yes. Always weight your baking ingredients. If not all: at least your flour.

I’m confused as to how this wasn’t already a thing? Measuring cups are for people that don’t care about the science…which is all baking is. Measuring works well with liquids, but solids of any type.

I thought everyone here on BB was STEM educated…SMH…

True of baking, but also true of cooking in general. For the majority of portioned ingredients, commercial kitchens always weigh. For them, it’s about cost and portion control, but also consistency of product.

asking for, say, 15ml of lemon juice is so much better than “the juce from one lemon” or “3 cloves of garlic, pureed”, since the output and size of that sort of thing is pretty variable.

Cooks Science (from ATK/Cooks Illustrated fame) is all about that now, and it’s about time: 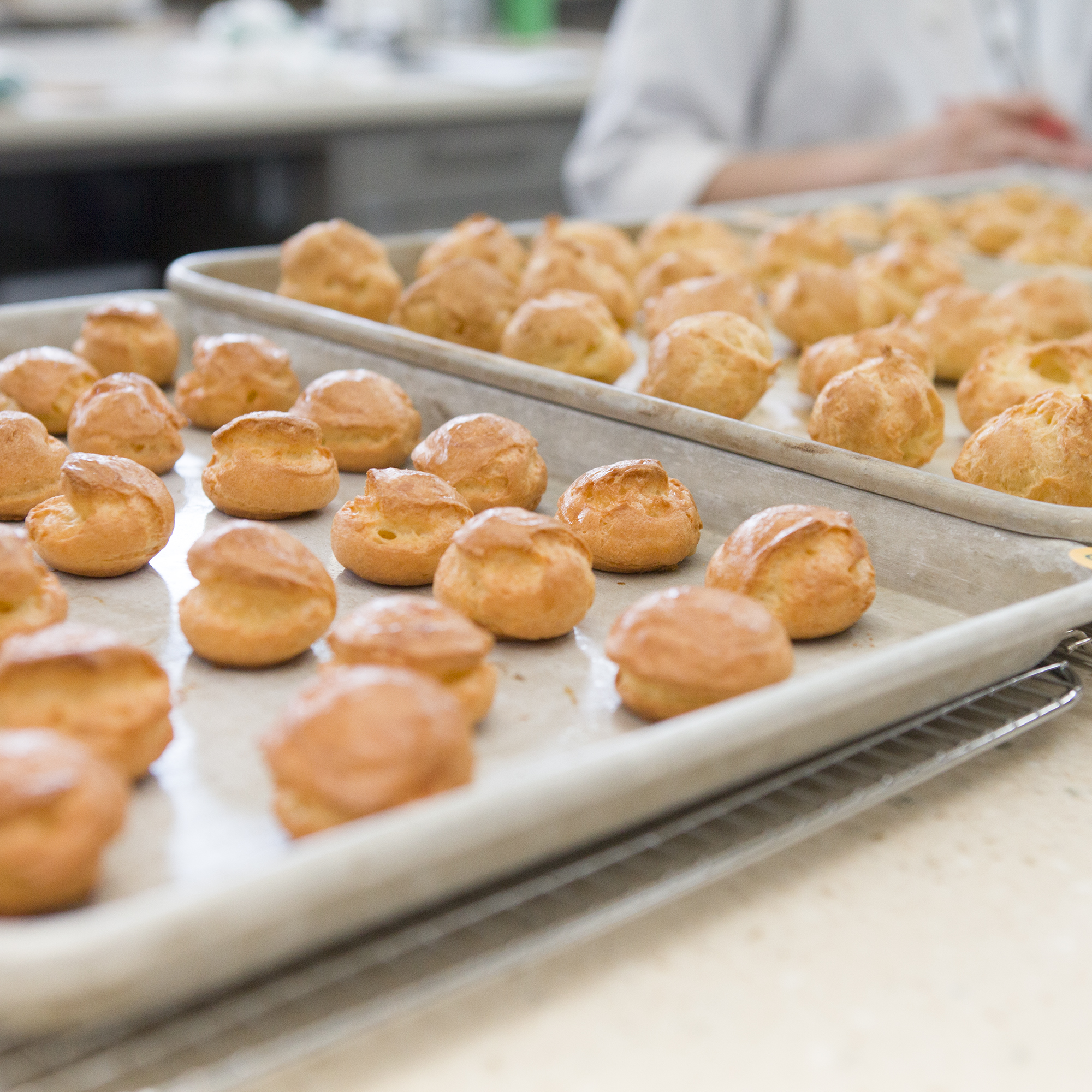 The science branch of Cook's Illustrated is the premier destination for home cooks who want to understand how and why recipes work. Browse our full offering of articles, recipes, experiments, and videos that delve into the science of food and...

True of baking, but also true of cooking in general.

Not really. Baking requires precise ingredients to work and for the ingredients to combine in the proper ratios. Cooking (i.e., applying heat) is often more of an art than a science. If you want less lemon flavor, you add less lemon. Unless of course, you needed the acidity of the lemon to react with something else. Which ATK does get into this aspect at times (weren’t they the ones that first noted that baking soda helps the maillard rxn by upping the pH levels?)

We make Challah every week in the breadmaker (braided and oven baked), and I can’t convince my wife to use the scale instead of the cup for flour if she does it. It’s even EASIER! Put the bucket on the scale, tare and dump it in. Nope, she refuses, and so sometimes the dough is wet, and sometimes dry depending on how compressed the flour was.
I also can’t get her to properly salt pasta water, but that’s another story.

How about weight for fresh herbs? I can’t stand recipes that call for “1 cup fresh parsley”.

Edit to clarify: I’m only talking about solids here. Liquids should be done by volume (see below).

Duh. There are weird regional differences with this. Northern Europe uses almost only volume. Central Europe (my 'hood) always goes by weight. Which makes so much more sense, since weight is always the same (yes, assuming equal humidity, but come on), but volume assumes equal fluffliness for stuff like flour or caster sugar. Also, the tare function of scales give you the option to put everything into the same bowl right away, which might be the biggest advantage IMO.

For liquids, volume is the preferred measure almost anywhere, I think, since they barely compress. Tea spoon (5 mL), table spoon (15 mL) etc., which are all standardised.

True, if you are simply cooking. It’s best to taste as you go, etc - something that is usually not possible in baking. However, in attempting to convey cooking methodology to others in an attempt to allow them to replicate your results (i.e., recipies!), volume or portion measurements are often troubling in this regard.

Say I produce a dressing you enjoy at my home, and attempt to give you a method to reproduce it at home, I tell you “juce from a lemon” and “2 cloves of garlic, grated” as components. you get home, and, having purchased juicer lemons than me, and larger cloves of garlic, you now have the wrong flavour for your dressing.

Now, of course, trial and error will allow you to get it right to match your ingredients, but isn’t that also true of baking? And if so, wouldn’t be a lot simpler if I could tell you I used 15ml of lemon juice and 10g of pureed garlic?

Yeah but unless it is a commercial kitchen, I’m not a big fan of whole sale reproducing the art of something! I understand some people do, but I don’t.

The science of things, how things need to react? Sure. A vinaigrette might need a certain ratio of acids to fats in order to maintain the emulsion, but at the same time…you can shake it time of application and for all intents and purposes it works the same. If you want it shelf stable for a while and want a specific presentation? Ok. However, I would expect personal taste to win out here.

That said, I’ve followed blogs where they’ve tried to replicate exactly specific dishes from noted restaurants (and some not so noted ones). Its interesting to see people do this, but in the end…it is less important than making a dish that you like. Or one that requires exact ingredients.

My baking game (especially bread) was fairly hit or miss until about 10 years ago. Everything changed for the better when I started a) using a digital scale and weighing flour, b) switching from active dry yeast to instant (or bread machine) yeast, and c) using an instant read thermometer.

Not only does the scale save time and increase accuracy when measuring out ingredients, it’s useful when dividing up dough. If your dozen rolls are all the same size they will all cook at the same rate, and every piece will be equally good when they come out of the oven. Once you get a recipe to the point where you love the outcome the tools let you get the same results over and over.

Every time I read crap like ‘one cup of kale’ I want to hit that person over the head with a Harold McGee book.

I also can’t get her to properly salt pasta water, but that’s another story.

How about weight for fresh herbs? I can’t stand recipes that call for “1 cup fresh parsley”.

I’ve even tried the old “it should taste like the ocean” guideline with my wife, and it hasn’t worked. She took surfing lessons this year, so I know she knows what the ocean tastes like!

Re: parsley - unless you’re cooking for dozens of people, “1 cup fresh parsley” is wrong, whether it’s by volume or weighed! YMMV.

If you’ve used a recipe with weight with a specific weight of flour. Yes, it’s more consistent.

However not all flour weighs equally. It will vary by brand of flour, season, and region. King Arthur claims ALL it’s flour is 113g/cup. Which is way off the 125 USDA AP weight.

Weight of flour PER CUP:

So, nope. Weight is not always the best measure, and changes in regions and flour brands probably explains why your biscuits your Grand Mother used with Gold Medal flour don’t come out as well with King Arthur.

I’ve even tried the old “it should taste like the ocean” guideline with my wife, and it hasn’t worked. She took surfing lessons this year, so I know she knows what the ocean tastes like!

Yeah, I just kinda made that up. Parsley pesto?

I can’t use the “ocean” one again after a recent “nerd cook” scene in Halt and Catch Fire.

I’m confused by your post. Weight is weight, it doesn’t require conversion. However (maybe this was your point?) some flours are higher in fiber than others, so the recipe will require a compensating increase in moisture content. 100g of whole rye flour will behave much differently than 100g of white ‘all-purpose’ flour.

Can you explain what you meant?

I think salting to seawater levels is way too much salt for pasta (it’s pretty variable how much salt you want and you get a feel for it after a while as with all things cooking, but 3.5% salt is a ton of salt).

Anyway, far too many recipes call for a “pinch of salt” or " to taste" (frosting, bread) for me to take this “weigh everything” admonition seriously. Usually, the scoop and level method works well enough for flour unless we’re dealing with a flour that has to be dried (in which case, it’s the % weight loss that’s important, so you want a before and after weight… may as well make it a round number to make life easier on yourself). For the other things, you have multiple-graded measuring cups, which aren’t accurate to the nearest 10th of a milligram, but are good enough.

It was weight of certain flours in gram weight for one ‘cup’ of that brand flour.
You need to know what brand of flour to be sure it’s not 130 for that specific brand of flour instead of the generic 125. How Much Does a Cup of Flour Weigh? I Weighed 192 Cups of All-Purpose Flour to...

How much does a cup of flour weigh?  It's an important question if you want to be able to convert American recipes over to the metric system or if you want ...

It was weight of certain flours in gram weight for one ‘cup’ of that brand flour.

That is the entire point of all this. Use recipes that don’t require conversion. If you are using recipes that use cups, you’ve already lost the game. Lot of older grandma traditional recipes use cups…the good modern stuff will tell you grams and THEN give you a conversion. Not the other way around.

And what’s more, using sensible measurement systems like grammes work better than weird made up things like ounces. Doesn’t everyone outside the US know this?