I just want to know how to pronounce “CBD”, because I get weird looks whenever I say “k-buh-deh.”

Please cite sources for scientific studies which show CBD helps with pain. I am trying to talk a friend into trying it but they say their doctor found no scientific evidence.

Cannabidiol is an anti-inflammatory and antioxidant. Whereas many pharmaceuticals mask symptoms of medical conditions but don’t get to the source, cannabidiol is healing.

Anti-inflammatory medication, especially NSAIDs, but really all kinds of them interfere with healing. And sadly many who market CBD received warning letters from the Food and Drug Administration for making unsubstantiated health claims.

As for the “all natural” claims. At what point does processing and purification cease to leave a product “natural”? Because it is possible to make Sodium salicylate by processing wintergreen oil, but I don’t think too many of us would consider that to be all natural.

Could we please stop hyping antioxidants? “Antioxidant supplements and disease prevention: little supportive evidence”
“The results of the largest trials have been mostly negative.”

Cannabinoid products are not the remedy for everything. Nor are they a miracle cure. However, tetrahydrocannabinol and cannabidiol have healing properties and fewer side effects than many pharmaceuticals. They’re gaining traction as natural remedies that have the potential for improving people’s health in a way that addresses the root of the problem. 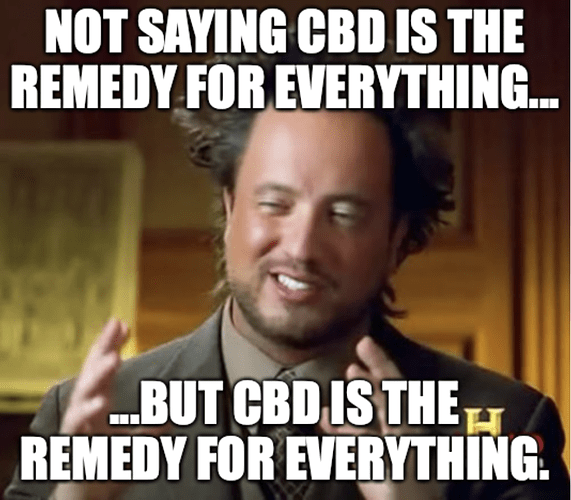 Here are 3 I had at hand in notes. None specifically demonstrate direct CBD-mediated analgesia. Pain research is a really weird area in general. There are a bunch of really gross animal models for it that have very limited applicability to humans and human research is really limited for how hard it has been to do this kind of research historically. Add to that that we still don’t understand the biological basis of several forms of chronic pain and we all wind up in the dark on things.

antinociceptive effects of cannabinoids in preclinical models of inflammatory, cancer and neuropathic pain, and by nociceptive hypersensitivity of cannabinoid receptor‐deficient mice. Cannabis‐based medications available for humans mainly comprise Δ9‐tetrahydrocannabinol (THC), cannabidiol (CBD) and nabilone. During the last 10 years, six controlled studies assessing analgesic effects of cannabinoid‐based drugs in human experimental settings were reported. An effect on nociceptive processing could be translated to the human setting in functional magnetic resonance imaging studies that pointed at a reduced connectivity within the pain matrix of the brain. However, cannabinoid‐based drugs heterogeneously influenced the perception of experimentally induced pain including a reduction in only the affective but not the sensory perception of pain, only moderate analgesic effects, or occasional hyperalgesic effects. This extends to the clinical setting. While controlled studies showed a lack of robust analgesic effects, cannabis was nearly always associated with analgesia in open‐label or retrospective reports, possibly indicating an effect on well‐being or mood, rather than on sensory pain. Thus, while preclinical evidence supports cannabinoid‐based analgesics, human evidence presently provides only reluctant support for a broad clinical use of cannabinoid‐based medications in pain therapy.

(LMK if you’d like the 6 human studies cited in the above, I can probably rustle them up)

2004 Cravatt Lichtman - Endocannabinoids in Nociception
Cravatt, B. F., & Lichtman, A. H. (2004). The endogenous cannabinoid system and its role in nociceptive behavior. Journal of neurobiology, 61(1), 149-160.
• these investigations support a role for endocannabinoids in modulating behavioral responses to acute, inflammatory, and neuropathic pain stimuli.
Summarizes findings of exogenous agonists and endocannabinoids as anti-analgesic effectors in acute, inflammatory, and chronic stimuli and suggests preferential activity in chronic settings

Many thanks! I would like to see the human studies, I guess, though they may not persuade anybody. It sounds like some people reported less pain, some reported caring less about it, & some reported more? Am I reading that right?

Yeah, pain is weird, & cannabis research is lacking partly because it’s been illegal in the USA for so long. One doc I heard on Fresh Air said that subjects complained the experimental cannabis was inferior to what they could buy themselves…I guess government researchers are forced to use govt-grown weed??? Sad…

At what point does processing and purification cease to leave a product “natural”?

With inflammation being cited as a primary source of modern diseases, learning that cannabidiol can reduce it is promising.

I don’t want to get put on any kind of spreadsheet or anything*, but at the risk of sounding disappointed, that’s precisely the kind of dangerously misleading woo that, under other circumstances, BB used to go off on.

“Inflammation” in a medical sense is a giant umbrella term. When your rheumatologist talks about it in the specific context of your specific form of arthritis, that’s one thing. Out of context, you might as well be talking about “vital energies” or “toxins” or “midichlorians.”

To be clear, I ain’t mad at the people who paid for this advertisement (pitchmen gonna pitch), and I don’t have any problem with CBD. It appears to be as safe as, if not as carefully studied as, the vitamins and St. John’s wort and echinacea pills you can buy. If that’s your thing, have at it.

But it’s a little disapp—er, unexpected to see it here. And just a day after BB also ran a story (not labeled as an ad) on CBD as a fireworks season anti-anxiety medicine for dogs. Hmm. Hmmmmmmm.

I know you gotta pay the bills, but…

* Just kidding. I very much want that.

At what point does processing and purification cease to leave a product “natural”?

As soon as you need to use a test tube or beaker to get it ready for sale.

As soon as you need to use a test tube or beaker to get it ready for sale.

That standard probably eliminates all “all natural” extracts made at a commercial scale. Running these things through a column still or reflux is pretty common. That’s kind of like a beaker.

In industrial chemistry the end product never passes through a test tube. That’s only for taking samples, and even a spaghetti sauce factory will take samples along the line.