Which Earbud is Right for You?

For me? “Indestructible” would be the best kind of earbuds for me.

I asked for earbuds that wouldn’t break at the device end for Christmas, so I got Bluetooth earbuds. Guess what? The earpiece broke.

I need earbuds that can survive being tangled haphazardly, thrown in a pocket, sat on, falling to the floor, getting stepped on and rolled over by a chair, and then I pick them up and they keep working.

The Munitios look like they could approach that, but the connector at the earbud end doesn’t look particularly strong.

The ear buds that came with my Samsung Galaxy S6 are the best ear buds i’ve ever used. I lurve them so much I will cry if/when they break. They fit my ears just perfectly and are not noise cancelling, so I can hear cars etc on my walk home and they don’t hurt my tiny ears, best ever!

Uhm, no, being shaped like a bullet cartridge does not make the Munitio earphones “tactical” in any way whatsoever. Check out an Army Ranger or Navy SEALs load out. Know what the only gear they carry that looks like bullets is? Bullets.

Wrong! If you don’t stick bullets in your ears you aren’t a real operator!

This !
Tactical stuff is like ballistic things and, to a lesser extent, aircraft grade aluminium: marketer newspeak.
I mean: my ballistic pink slippers do fall when I drop them.

For me the right one was the one where he plays volleyball with a parrot. YMMV

For the money, I’ve found the $50 range Skull Candy to both sound great and be fairly durable.

Now, if they could only make a pair of headphones I don’t end up losing…

Because of that, for when I am traveling, I usually find a good cheap pair and buy 3-4 of them. Then, I spend my money on one nice pair for running/workouts, since I am not likely to ever remove those from my gym bag.

The munitios look to have some great features for the price, but I’d be afraid people would mistake me for a mall ninja.

Yurbuds are the only earbuds that have ever fit me, at all, even sort of. They have ones “made for women” which is nice because before I found them I would have assumed the right ones for me are ones sized for toddlers. Seriously, I have a photo of me holding a two year old child, and our ears are the same size.

I must have sensitive ear canals or something because I find any earbuds designed to jam in there painful and annoying. TBH the Apple buds that have come with iPhones or iPods seem like the best to me. Really nice sound for what they are, and I can wear them all day.

I love my Klipsch earbuds, hands down the most comfortable and best sounding earphones of any type I’ve ever owned (and I have a drawer full of them).

Part of the secret is the super-soft silicone “mushroom” that actually fits into your ear, is oval shaped, instead of round, because your ear canal is oval shaped, not round. And the sound channel is bent forwards, because your ear canal doesn’t go straight into the side of your head, but bends forward towards your face. So when you’re wearing them, the part you can see appears to be perpendicular to the side of your head, but the actual buds are tilted forward towards your face, following the natural curve of your ear canal. That also means that you can’t swap the left and right buds. They can only go into the ear they are labeled for.

I liked these so much that I bought a second pair, a 3-conductor model without a mic, for my laptop, and some spare silicone buds just in case one gets lost or torn. But so far, they’ve held up.

Wow. Wood, because violins? Old school look? Were you guys able to keep a straight face while you were typing that? Because I definitely cracked a smile when I read it. Hilarious copy. Seriously, though, wood earbuds sound like a great way to get splinters in your ears. 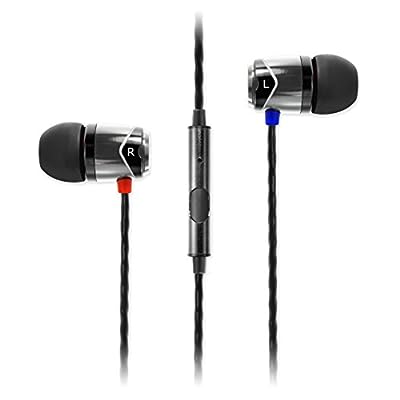 The original Apple iPod earbuds really hurt the indentation leading into my ear, just above my earlobe.

So, in 2006, I bought a pair of Bose earbuds and they included three different sizes of silicone covers. Nice fit, but the covers often slipped off. I eventually lost one cover, but no big deal because when I called Bose they sent me free replacements. They also said they were in the process of improving the covers, so they sent me those, too. Still, I was constantly having to push the little suckers back into my ears because they’d work their way out when I used them while working out.

At one point, I noticed that the little mesh cover (you can see them inside @Missy_Pants’s Samsung earbuds) went missing, but I still used them since the cover extends over the actual “speaker.”

Then one summer, I noticed my hearing diminishing. So I bought some over-the-counter ear wax cleaner and when I sprayed my ear canal out with warm water, out came that little missing piece of mesh along with…well, I’ll let you picture what happens to a foreign object when it’s left in your ear for some time.

Now, I wear over the ear headphones.

Honestly, best earbuds I ever had were a pair of $20-25 Sony earbuds. Came with ear thingies small enough to fit in my apparently dainty ear canals. Solid seal without pain for hours. Didn’t pop out of my ears the second the cord came in contact with a light breeze.

When those finally died, I got another pair of the same that lasted until I dumped one ear in a hot cup of tea while the music played.

I miss my sony earbuds but the studio headphones I got to replace them are no joke. And people can tell from 50 feet away that I’m Not To Be Disturbed. Which is the one flaw of the stealthy little earbuds.

The left one. Like Agent Smith. At all times. Because that’s my good ear. The right one is just for noticing if there’s a loud noise.

Some offer premium sound for the audiophiles, some lean on stand-out features and compatibility for the tech geeks – and some just make you LOOK cool.

Some are just decent sound at a bargain price, so those of us who do vigorous, sweaty outdoor things while wearing them can throw away a broken earbud or replace a lost set without the slightest sense of regret. Like replacing a shoelace.

Hey…“compatibility”???..are there some 3.5mm jacks that only work with particular 3.5mm plugs???