Sometimes it almost seems like @beschizza doesn’t care much for conservatives.

Sometimes it seems like conservatives don’t care much for the rest of humanity.

This sort of impatient sneering contempt, plugged into the place where most people have a sense of humor conscience, is a totalitarian thing.

Sometimes it almost seems like conservatives don’t care much for others.

he was tortured in Vietnam, whereas Haspel supervised torture at the CIA.

Imagine if the only Republican legislator who had the courage to take a stand against rape was someone who personally survived it, and then they were mercilessly mocked and attacked by members of their own party for doing so.

They’d ask her why she didn’t just shut that whole thing down. Assuming they determined it was a legitimate rape, of course.

Something…something…and the horse you rode in on, comes to mind.

Speaking ill of a dying man, one of their own, it doesn’t take too much imagination to as what else they are saying about others.

Speaking ill of a dying man, one of their own

They don’t consider him “one of their own” because he only votes along party lines 97% of the time instead of 100% of the time. That’s basically like being a race traitor.

Totally. I mean what Rob needs to do to be fair to conservatives is to make sure no one reads factual accounts of conservatives doing and saying horrible things. Then he could start bashing anyone who wants to make the world a better place calling them liberals and socialists so he can start using the “Fair and Balanced” tagline. Then people would be less informed and more apt to push back against positive change which is the whole point of blogs like this, right?

She seems n… nasty.
Maybe a bit Nazi? She seems like one of those ‘very fine people.’

Two a-holes in one day.

This is where the public conversation has been heading for some time.

A Wikipedia editor got this guys allegiance right - since then removed.

What interests me about remarks like this from the right-wing hordes is that it seems to have become their go-to rhetorical strategy. Say the maximally disgusting thing at the maximally disgusting moment. It’s a kind of juvenile acting-out, appealing to the juvenile instincts of a particular audience. The class clown, or wannabe alpha male, tweaking the nose of authority in front of the other kids.

Sometimes it seems like conservatives don’t care much for the rest of humanity.

I think it always seems that way!

I have a real distaste for McCain. He never saw a foreign war he didnt like. He toured HTS in Turkey early in the war in Syria and has been a vocal supporter of some of the most extreme special opps interventions in other countries. Without McCain and co the war in Syria would have been over 4 years ago. You will find similar wars all over the world that John McCain has done his best to fuel.

But in additional, lots of people on both sides of the aisle say he is a vile man. It might well be because he is in constant pain cos of the torture, but there are multiple reports of his foul mouth and abusive behavior to women - most notably his wife. Then there is the corruption question. Keating is pretty damn transparent to anyone who knows anything about finance.

Here are a few links to corroborate. So forgive me but I’m in the “lets celebrate cos that arsehole is on the brink of death” camp. Metaphorically of course. 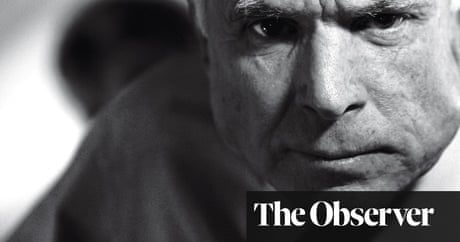 The real McCain: Paul Harris uncovers the dark side of John McCain

To his fans he's a lovable patriot with a maverick streak. But to his critics he's an anti-abortion Creationist who surrounds himself with religious extremists. Paul Harris uncovers the dark side of John McCain

John McCain's temper is well documented. He's called opponents and colleagues "shitheads," "assholes" and in at least one case "a fucking jerk."... ...

McCain: The Most Reprehensible of the Keating Five

You're John McCain, a fallen hero who wanted to become president so desperately that you sold yourself to Charlie Keating, the wealthy con man who bears such an incredible resemblance to The Joker. Obviously, Keating thought you could make it to the...

I added an “a” to the youtube link so as to avoid outraging those who dont like rude words.

Can I post this? Is it still cool and/or relevant?