I get the impression that this’ll have taken a lot of people by surprise. Still, good on McCain in this instance.

For now. maybe he’s looking for the right time to twist the knife.

Or maybe this was a bill that allotted to much power to the smoke filled rooms, and an objection to this bill was based on matters of procedural principle.

What about now? Is McCain a hero again now?

What about now? Is McCain a hero again now?

But he did the right thing this time.

McCain put on a show for attention. His first actually decent action as a Senator in how many years? No cookie.

Susan Collins and Lisa Murkowski were no from the start. So, let’s give them some due.

Basically. With a side of “stupid tired lies about the ACA”.

McCain's statement on his no vote https://t.co/jofwbgWGhm 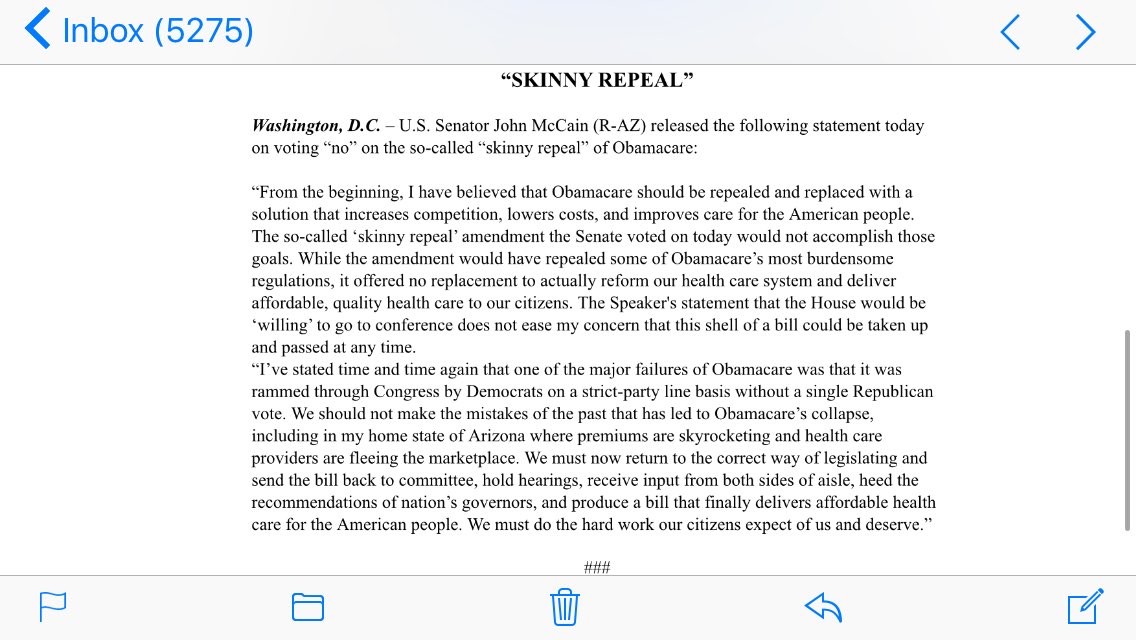 If McCain is actually calling for a 60 vote solution, then I am all on board. He is still a douche bag and a hot-head, but I’ll give him props for doing the right thing tonight.

McCain put on a show for attention. His first actually decent action as a Senator in how many years? No cookie.

Susan Collins and Lisa Murkowski were no from the start. So, let’s give them some due.

They’re people who have devoted great effort towards attaining a senior position in a political party that has been blatantly racist, sectarian and plutocratic for decades. And they have chosen to maintain their membership of and advocacy for that party even after it transformed into a catastrophically dangerous fascist organisation.

Okay, maybe, just maybe, this was McCain’s big FU to the party that threw him under the bus during his primary run against W and for shoving Sarah down his throat. And finally it’s the biggest FU to 45’s personal insults to McCain’s character. The whole thing with his riding in the other day to cast the final vote to continue this process just to extend this to 1am to cast the deciding No vote to kill this thing. Well played,sir. Well played.

Yeah, that too. But they did take serious heat for this. Especially Murkowski, getting threatened with physical violence and shit.

He had no way of knowing he’d be able to cast the deciding vote. That was a stupid fucking gamble with millions of lives at stake.

I’m not defending McCain for all of has many bad decisions over the years but politics is about leverage and power. McCain is a seasoned political veteran. He knew what he was doing and played his party, giving 45 a nice big finger on the way.

He knew what he was doing and played his party, giving 45 a nice big finger on the way.

He certainly did. He knew quite well he could have shut this thing down a week ago, but this way he gets to be The Deciding Vote in late-night congressional drama, getting all the headlines as he rides off into the sunset as The Maverick.

Proud of my Senator, Murkowski, tonight.

(Not so proud of Sullivan, my other Senator.)

This makes two decent things that McCain has done in his life when they really counted.