What are you trying to suggest here? That we are marginalizing @wysinwyg? Because I don’t feel as if I have. I’ve not called him names and I’ve tried not to make false assumptions. If you think I’ve been unfair, please say so and point to precisely what I’ve said that’s unfair. I know I haven’t agreed here, but disagreement is not marginalization.

This analysis seems designed to exclude any possibility that there were legitimate flaws with Clinton as a candidate–an incredibly foolish position to take.

Dear god, yes, she’s flawed. But to ignore the sexism, well, that’s equal amount of bullshit and foolishness. We just elected a man who said “grab them by the pussy” on tape. He bragged about sexual assault and I’ll repeat again: In 2016, that didn’t sway voters away from him. We can wax on and on about her policies, etc., but the fact that he won means we must confront some awful, ugly truths about us as a nation: We are still sexist. We are still racist. If we exclude this from the conversation, then we are perpetuating the notion that the playing field is level, when, my dear friends, it simply ain’t.

And @JonS: Mississippi Burning … as you say, it’s a problematic movie. But I’ve lived in the Mississippi Delta and lower Alabama and there are people like the Frances McDormand character here. Let’s not write off these red states as if we aren’t the United States. The Southern Poverty Law Center fights in Montgomery, my home state. These are the people to admire, in my opinion. The ones who go to the red states and fight for what is right.

In that conversation, we were talking about whether Trump’s ad was a “message of hate for the Jews”. the bulk of the evidence of his antisemitism seems to be an alleged, unwitnessed remark made 30 years ago about him preferring accountants who wear kippah, and his apparent disdain for Goldman Sachs.
I don’t set the bar for defining antisemitism as high as having committed actual pogroms. I can see that I worded my previous remark very poorly, looking back at it. But I am pretty skeptical of dog whistles as hate speech.
I have been thinking a lot about the implications of the election, partly from having a daughter and a sister very active in the LGBT community. The fear that they are hearing reminds me of something. I have mentioned that I sometimes do battlefield archaeology, including the recovery of remains. A long time ago, I was working on Saipan, where one of the combat photographers had taken some very haunting footage of a Japanese woman throwing her baby off a cliff, then jumping after it. I was able to use still images of the event to find the exact spots where the photographer stood, and where the woman jumped from. The reason that she, and many other civilians ended their own lives was because of the things that they had been told that the Americans would do, should they capture women and children. Those beliefs were not based in reality. They were wartime propaganda. The Americans killed thousands of civilians, but did so with artillery and grenades. They were very unlikely to harm noncombatants surrendering after a battle.
The DNC has built up Trump to be essentially Hitler. He is surely crude, vulgar, and narcissistic, but most of the racism and antisemitism seems to be propaganda. And it is pretty unlikely that the operatives who promoted those ideas really believe them. Just like the things that previous campaigns said about each other, and turned out to be hype. Like campers telling each other ghost stories, then being terrified to sleep. It is not really the ghosts out there causing the distress, it is the ghost stories.

Like campers telling each other ghost stories, then being terrified to sleep. It is not really the ghosts out there causing the distress, it is the ghost stories.

Is this post ironic? I don’t think so, which scares the ever-loving shit out of me.

Trump’s family have been involved with ghost stories. The kinds where the ghosts have pointy heads…

but most of the racism and antisemitism seems to be propaganda.

Funny, where have I seen that before? Oh, yeah, about 94 years ago…

"Hitler's only kidding about the antisemitism" New York Times, 1922 boing

You are trying to dismiss the very active and real concerns possessed by people that are dissimilar to you as “propaganda”, despite the fact that, for many, the fears are actually concrete and based not on unsubstantiated statements from his opposition, but are actual and official policy statements of his.

I will admit that my fears regarding antisemitism are not on that level of legitimacy, as I have only been threatened with death by long drawn out torture by his followers, and not by his newborn administration and/or campaign, but that does not make your comparison anything other than active and willful ignorance and blindness.

I will, at least, give you props for at least recognizing why I took such umbrage at your previous statement. Admittedly, that’s immediately erased by the willful blindness in the rest of the post, but it’s at least something that’s different than your usual pattern of doubling down and digging yourself a deeper hole.

In October, Time published a piece about the possibility of Trump bringing back Slavery.

Why I Fear America Could Enslave Black People Again

What? What? I sincerely don’t understand. How does this possibly relate to my response? I’m likely silly for engaging, but it’s late, so what the hell.

It doesn’t relate to your response. It’s clear he didn’t read far enough into the article (perhaps not past the headline) to see Smiley’s point in regard to slavery, which turns out to be related to the earlier conversation about federal standards. On that basis I wouldn’t bother engaging any further, or at least backtrack one fork down the road so that you don’t waste time arguing over a dead end [ETA: Hillary’s “Robert Byrd thing” is another ridiculous dead end]

Me, I’m taking Max as finally helping answer a question I and many other students of 20th century history have had for a long time. There’s value in that.

Hitler was pretty clear about antisemitism. I am sure that when I get to my office tomorrow, I can come up with some clear antisemitic statements published by him prior to that article being published. I also agree that his dad was likely involved with the Klan. But Hillary had the Robert Byrd thing.
When I heard about Trump’s hate for Jews, I did ask if it was true, and why people believe it. The answer seems to be that he was accused of antisemitism as a campaign tactic, not because of his actual words or deeds. The evidence was sketchy. If any actual evidence appears, I am open to it.

Hitler was pretty clear about antisemitism.

The evidence was sketchy.

I respectfully extract myself from this discussion because if I don’t, my head may pop off my shoulders and cause a mess on the ceiling. So, thank you all, and good night.

No. Strip the federal government of the power it has to impose anyone’s values on anyone else.

I’m not sure what this means. Separation of church and state already does this.

Separation of church and state already does this.

(Ha. OK, in the context of the argument I’m just trying to divine what law or laws he/she thinks need to be repealed-- as it stands the feds don’t have that power, in theory.)

Re: Mississippi Burning, I agree. The reason I posted that clip was the quote “if you’re not better than a nigger, then who are you better than?”

Replace nigger with, well, nigger, or fag, or dyke, or bitch, or kike, or wetback, or etc., and it could be part of a movie made about this election.

No pissing match needed, you are correct. But I will always maintain that a treaty that was negotiated by a Republican and passed with mostly Republican support cannot be laid solely at the foot of the Democrat who signed it after they had done all that work and pushed it forward. It also says more about Clinton’s economic policies and neo-liberal views than it does about the Democrats as a party, the majority of whom opposed it.

they have neighbors who feared ISIS was coming to kill them and that Syrian refugees were going to move in next door.

People who think that the Sturmabteilung are going to kick in their doors come January 21 are no smarter.

Bigots don’t have any place in polite discourse. Bigots should be marginalised. Bigots should certainly not be allowed to run their local communities according to their racist desires.

When dealing with fascist bigots we follow Bertrand Russell’s example and respond as he responded to Oswald Mosley. It is Especially worth paying attention to the final two paragraphs.

Fascist Oswald Mosley was born 120yrs ago today. Here's Bertrand Russell telling him to shove it - a letter I've thought about a lot lately. https://t.co/G1oSXXXuMQ 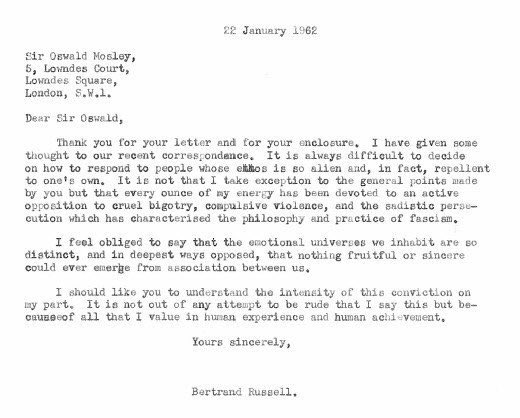 Oh and another thing. Reading through these exchanges I am increasingly under the impression that @wysinwyg is creating a distraction, occupying important brain space that we need to consolidate and work towards a better more caring inclusive social order.

you guys try to discredit my message by painting me as, if not sexist and racist myself, then certainly someone going out of his way to empower sexists and racists. This is also what liberals and the media tried to do to defeat Trump. In case you’ve been holding out to check the election results, it didn’t work. Try a new strategy.

I really don’t remember that the right spent much time trying to empathise with the Obama voters. If my memory serves me right on day one they vilified and were united in their dismissal–remember the birther thing? That birther thing just got an unqualified, incompetent demagogue elected to the White House. That, and not empathy with the minority ethnic Obama voters, was the right’s response to the 2008 election. So if we have learned anything it is that uniting behind a vision and discrediting the message of the opposition works.

So, I think we, @Brainspore @Mindysan33 @gracchus @jlw can safely leave the bigots where they are, at the margins (even if that margin is geographically located in the Middle and has shown itself to be around 20%) and focus on building alliances with the 50% who didn’t vote and support the other 20% who voted in opposition to bigotry. Seems to me a far better winning strategy.

EDIT: to add this incredible interview. Dr. Harry Edwards is concise, clear unambiguous. All of it is worth listening to but listen especially starting at 9:10. “If you ever wondered what you would have done in 1930s Germany, I am afraid you are about to find out…” 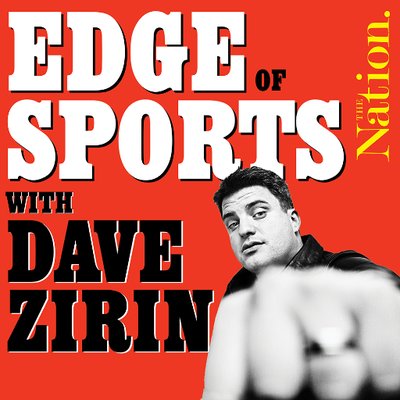 Latest @EdgeofSports Podcast Is UP: "Talking to Dr. Harry Edwards On The Future Of The Athlete-Activist Under Trump" soundcloud.com/edgeofsports/h…
14 Likes
lolipop_jones 17 November 2016 12:18 #264

One thing I don’t see mentioned very much in all these Democrat post mortems is the fact that Trump is the first presidential candidate in our history whose entire career has been spent in sales and marketing.

You think that you spend fifty years getting people to buy property at 10-50% more than its intrinsic value without learning something?

Lots of people got very angry at Scott Adams’ spending months on his blog discussing Trump and the art of persuasion. Too bad for Hillary that she did not check it out.

That birther thing just got an unqualified, incompetent demagogue elected to the White House.

I doubt that more then 1% of the Trump voters are still interested in the “birther thing”.