Why (or why not) to vote for Jill Stein

I voted Green in the UK because I though Miliband and the Labour party were rubbish, and I’m supporting Stein here because she’s left of Clinton, who I really don’t like. As mentioned elsewhere, I wouldn’t do that if I lived somewhere Trump might win.

I don’t like the Green’s position on alternative medicine, and in the UK, there’s also a worrying anti-semitism, but as I said, voting for them is about who they aren’t, mostly (although Caroline Lucas is awesome, and I suspect Bernie’s brother is too).

(although, to be fair, my vote in the UK was in a marginal constituency Labour needed to win, so perhaps I should have voted for them despite my misgivings)

I want to like the US Green Party, and besides a few things where they’re more of a hippie movement than a political movement, they’re generally better than the Dems. on many fronts. They shoot themselves in the foot with the hippy claptrap that alienates normals who could benefit from a lot of their policies/platform, though it’s their foot to shoot.

Why (or why not) to vote for Kim Davis?

Why (or why not) to vote for Kim Davis? 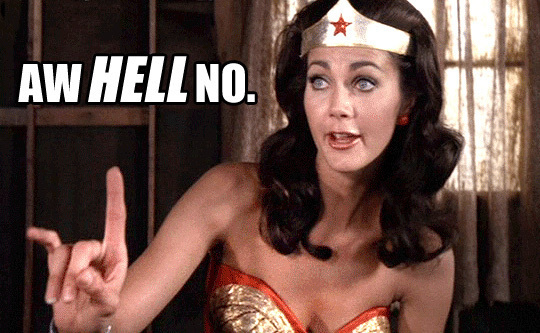 What about a why (or why not) to vote for Wonder Woman?

What about a why (or why not) to vote for Wonder Woman?

That Lasso of Truth would certainly make the debates a lot more fun to watch.

TRUMP: “I’m the best candidate for the job and I have fantastic plans to make America Great Again!”

TRUMP: “I’m sad, lonely man who has no idea what he’s doing and I am terrified that the world will find out about my tiny penis.”

I’d actually say more like Average Grade School Teacher > Average Citizen who values Science > Clinton > Jill Stein > Average Juggalo > Average Senator > Average Violent Felon > Donald Trump when it comes to the qualities that enable them to do a good job in the role. Clinton’s definitely above average for a senator though!

Being able to learn and grow gets weeded out pretty quickly in politics, where firmly sticking to stances is valued and maturing becomes flip-flopping.

I like the idea of a EU, and I think it was a mistake for the UK to leave.

The US needs a left that isn’t so culturally bound to the hippies.

While I see your point, I challenge the non-Green parties to produce a candidate who inspires a rally attendee to perform a modern interpretive dance right in front of the candidate during a speech. (Which is what happened at a 2000 Nader rally in Austin)

After Obama designating the Stonewall memorial this week, I’m dreading that a Trump presidency will result in a Rowan County memorial.

Goes to show how ridiculous it is when douchebags accuse leaders on the left of being motivated by ego, when it’s obviously about advancing a progressive agenda.

Who? Never heard of her and I doubt most of the voting public has either…

Yup, I often wonder which is party is more anti-science, the Greens or the GOP.

Yup, I often wonder which is party is more anti-science, the Greens or the GOP.

Whereas they’re sincere but still pushing an alt-med corporate agenda that hasn’t seen a bigger evangelist since Orrin Hatch?