Why I'm Voting For Gary Johnson And Why You Should Too

So Johnson is actually a dadaist performance artist? That explains much.

I just … you know … wow. I understand his support for legalizing marijuana, though.

If more politicians bit their tongue, there would be much less bullshit in the world.

Well, I came in here ready to seriously unload on people, but now find myself … thoughtful.

I am so sick of this election; after the video played, a Trump video autoqueued… 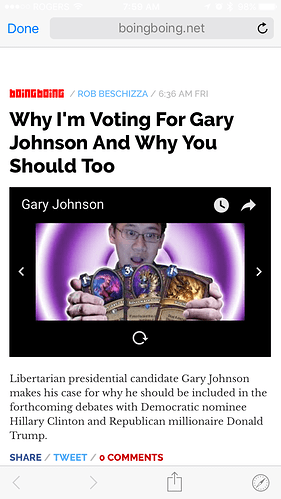 I’m surprised you didn’t get a Lizard People video queued up next.

YouTube is probably judging you as you speak for watching that Gary Johnson video.

With a net worth of $31.3 million, is Clinton not considered a millionaire?

With a net worth of $31.3 million, is Clinton not considered a millionaire?

To be fair - only one of the two has made a brand of themselves based off the fact that they are rich - the phrasing is (I’m sure) an attempt to honor the self image that Trump has spent his life projecting.

Being a Libertarian, where he’s right he’s really right and where he’s wrong oh my God he’s so very wrong. At least with the Democrat, she’s just a little disappointing in every category, like a packaged sigh.

i’m voting for gary johnson. he seems like a genuine down to earth guy who is ready to take care of the country and its citizens. unlike the other two who are doing nothing but attacking each other and have hidden agendas.

Anytime I open a BB article I expect has a video on it, I open it incognito cuz y’all are a bad influence on YouTube’s video suggestions.

For a solid week after last time I didn’t incognito, they played Trump ads in front of all my music and suggested me Alex Jones-esque conspiracy theorist and prepper videos.

Love y’all but y’all gotta stop letting your curiosity get the better of you.

We shouldn’t spend on climate change because one day the sun will “grow and encompass the earth”—Presidential candidate Gary Johnson in 2011 pic.twitter.com/1ZJSKGN5N6

It’s gonna gonna be sweet when Ruth Bader Ginsburg is replaced by Judge Roy Moore and Joe Arpaio is Attorney General. Thank you for voting “Libertarian” and making the Trump presidency a reality.

It’s gonna gonna be sweet when Ruth Bader Ginsburg is replaced by Judge Roy Moore and Joe Arpaio is Attorney General. Thank you for voting “Libertarian” and making the Trump presidency a reality.

Bullshit. Ruth Bader Ginsburg is an Immortal. Death has come for her and been fought back. Twice! She’s waiting for the End, to take on the Heat Death of the Universe, because she likes a challenge.

Sure, he doesn’t deny global warming. He thinks we should fire up more coal plants and just power through it. As if “clean coal” is a real thing and not a marketing brand.

Reminder: A vote for Gary or Jill is a vote for Donald.

Or, you could vote for the most qualified candidate in generations.

It really does delineate the difference between ‘bullshit’ and ‘nonsense’, I’ll give him that.

@beschizza Your trolling is high art.

“seems” being the important word here.