So…Herzog hates chickens yet has worked repeatedly with Klaus Kinski. I just don’t get it.

I like the bit where, as a child, Herzog lives with Kinsky and Kinsky locks himself in the bathroom and destroys every piece of porcelain bath-ware so completely that at the end of his 48 hour fit of uncontrollable and incandescent rage, nothing is left but a fine powder covering the floor of the room.

My experience with my grandfather’s free-range chickens taught me that chickens are dumb. And when they aren’t dumb, they are evil little beady-eyed velociraptors who will eat their own.

Chickens don’t need to be smart, any more than a fly does. Scratch for food, run for cover when a shadow crosses the ground, lay lots of eggs, and brood them. Brains come at a cost, evolutionarily speaking. Chickens are capable of a certain grandeur and nobility, though. Werner seems vaguely repelled by the messiness of biology in general.

All birds are amazing. I was watching the nesting crows today whilst waiting for a train. There was one who had clearly just pulled, and was doing the crow equivalent of the yawn & stretch the arm out manoeuvre, but she kept shuffling away.

If any thing, people are mentioning his name. A good thing. Loved the “Bad Lieutanent”.

And when they aren’t dumb, they are evil little beady-eyed velociraptors who will eat their own.

I am amazed/appalled that they can peck a fellow chicken to death if they see any amount of blood. I like to think that they are just too dumb to know the difference between pecking a chicken and pecking the ground, and not that they are evil-minded poultry.

“Nut to mention ze time vere I vas given a bad Coupon.”

True. Henpecking is a terrible thing to witness, although maybe on some Darwinian level it makes sense. On the other hand, I’ve seen one of my hens boldly and loudly stand between a raccoon and her chicks in the middle of the night. And she won. I was very impressed. Also, when hand raised from chicks they imprint like geese and make sweet, affectionate pets.

You can’t mention Herzog and chickens without the obligatory:

For the record, that wasn’t the cows’ fault.

It was a false alarm that forced the plane down because the combined cattle heat set off heat sensors. Never overcrowd a bunch of motherfucking cows on a plane. Although, I will concede the combined gas emissions from the cows’ rear ends may have been a contributing factor to the problem. 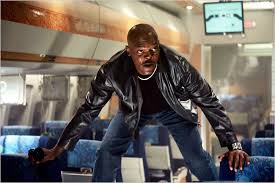 Hold on to your spoon… An aluminium tube pressurized with methane? One spark and they would have been flying over the moon.

Chickens hate him too!

They prefer to be called flight attendants. {rimshot!}

Would a shoe run around for years without its head? I think not. Point, shoe.

Edited to correct: I thought it was longer than 18 months. Oh, well. Still, a shoe wouldn’t do that.