We got’a get the tRump out of the Whitehouse, STAT!

The obvious answer is there are a lot of newspaper and TV station owners who are really, really racist and are looking forward to being able to file some glowingly favorable reports on future atrocities.

He’s a nazi. Just saying it like it is.

Because Trump loves libel lawsuits. It takes company resources to fight even bogus lawsuits like these. Their legal department doesn’t like that and advises against it.

They’ll warm up as it becomes more public opinion because then it can be quoting people and not their opinion.

I’ve heard people saying that it’s because calling them “racist” would potentially give grounds to a libel suit. Except… they are racist! Granted, I’m not a lawyer of course but I fail to see how they could be explained away as not racist.

Then again this is what we have in my own country as well, populist government propaganda spewing all sorts of terrible shit, and the few remaining media outlets of the opposition being completely incapable of/unprepared to call them out as such for some reason I don’t entirely understand. Instead they’re shaking their heads going “that’s terrible but let’s not exaggerate” and “let’s not be too harsh” and “let’s not get down on their level”… and so the terrible shit gets normalized even in the liberal/non-govt friendly media as people get used to seeing it. 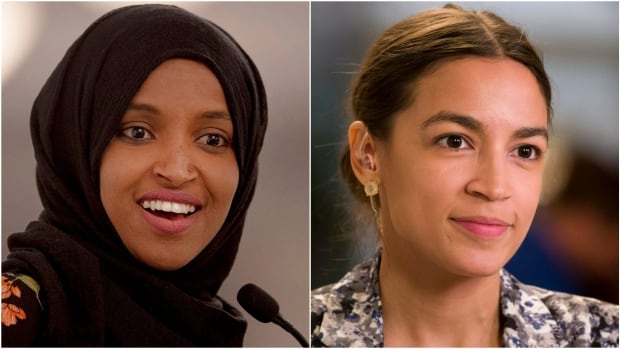 Trump tells Democratic women of colour to leave U.S. in 'racist and...

U.S. President Donald Trump on Sunday assailed a group of Democratic congresswomen of colour as foreign-born troublemakers who should go back to the "broken and crime-infested places from which they came," ignoring the fact that the women are...

Jesus, when CNN is setting the bar for moral courage, we’ve got to ask ourselves some serious questions.

I’ve heard people saying that it’s because calling them “racist” would potentially give grounds to a libel suit.

The reason is extremely simple and pretty clear.

The media has been demonized by this man for years and now he is in the highest bully pulpit in the world.

A lot of people in America have no guts to stand up against what is wrong when they see it and that is why he has been elected in the first place. I would say most Americans are complacent or cowardly in the face of bullies.

I realize this idea probably pisses off a lot of people but I believe it, and I think the media refusing to directly acknowledge this as what it was, which was racist, is a direct result of their strange fear of being criticized by him, as it seems now even diplomats and world leaders are, because it’s as if his power of being atrocious is magnified by his office, and people don’t want to call out a grown man a bully, even when it should be clear that he acts a little better than a spoiled child.

Edit: @xeni gave CNN a pass for doing the right thing with their headline. Huffpost also gets it right.

The article does give CNN a pass…

Kudos to NPR as well, they called it racist clearly in their coverage this morning.

Thanks. I admit I quickly scanned it while on a call. I’ll edit my comment later

Mike Pence's chief of staff is the first White House official to speak publicly of President Donald Trump's comments about some Democratic lawmakers.

He had the whole Bingo card in there, and that one nailed it.

Spoilers: he trying to play the victim in all this

Trump says congresswomen he insulted should apologize to him yhoo.it/2JOsI42 https://t.co/YUxtQkdLoY

Because he’s made them more profitable than they have ever been, and for this reason everyone from Fox News to the NY Times will do everything in their power to keep him in office.

Trying to switch from an accusation racist words to one of racist, racist* motives because the former is undeniable and the latter is always unprovable.

* Thanks to @Auld_Lang_Syne for pointing out I had forgotten the comma! (Rather than admitting that I put the word racist there twice in error, I retroactively choose to mean what I wrote)

Probably for the same reason MSNBC sees light between Eppstein and Trump.

Just now on @MSNBC when @JohnJHarwood brought up @realDonaldTrump’s Epstein connection, @KasieDC went whoa, don’t suggest Trump’s as bad as Epstein. But while Trump hasn’t been convicted, seems to me the rapes & assaults of which he’s been accused put him in a nearby league.
4 Likes
next page →