Why you can't flick a tick

*gets the flamethrower* I hate ticks. >_>

Being a 40 something and having had dogs all my life. I feel like this is not stunning or timely news. Like. The science was in on this about 50 years ago.

I’ve only had one tick on my dog, and was shocked at how strong their hold is. Pretty incredible.

I have heard olive oil as well, it suffocates them.

Also lighting a match, blowing it out, and touching the tiny fading ember to it’s butt. That works too.

(In the absence of good tweezers or campho)

Both work. But if you want to see them let go now. I mean right freaking now. Try some campho.

ETA: this goes out to basically everyone posting in this thread so far, and of course the other ones who will share similar advice. Also, edited for more DON’T advice and the reason to DON’T.

Also, don’t press the body, don’t twist them out, don’t pull on the body, don’t use chemicals like camphor, pyrethrum, don’t use heat, fire, and all the other stuff which makes ticks empty their bacteria and possibly virus-loaded glands and stomach into your system.

Either get a tick removal device, or use fine pincers without too much pressure below the body, on their head. Pull gently, so your elastic skin slowly gives way.

Oh, and mark the area / take a photo, and have a watchful eye on the site for several days. If you get an expanding red rash, especially: a circle, go see a qualified medical professional for advice and possibly for antibiotics.

You might also want to look up if the region you are in is known to have endemic* borreliosis. But don’t rely too much on the accuracy of that information.

'* That’s me using the medical terminology “endemic”. Not the proper scientific one.

Eep, never suffocate it burn a tick to get it off. If the tick is a carrier of any of the myriad of tick-bourn diseases it greatly increases the chances of contracting the disease. When under duress the tick will regurgitate along with any of the nasties it carries.

Always use the finest point tweezers you can get, get right in there as close to the mouth parts as you can and gently pull. If you can inspect the wound as soon as possible with magnification to check if any bits got left behind.

Thank you. You beat me to it, while I was editing my post.

Camphor oil is an excellent disinfectant, insecticide, and germicide. Here in north central Texas we get a lot of cedar and that means lots of ticks. I’ve been advised to use campho on ticks by multiple vets and it’s never been a problem. Pulling them however is risky. Those heads come off easily and can be problematic.
But to each their own. Perhaps I’m taking too much of a risk but after you have dispatched a few thousand ticks with campho and seen no negative side effects, you tend to begin to trust it.

My cousin always beat me at Subbuteo, 'cause he flicked a tick and I just didn’t know

It is less risky to pull at the head. Never pull from the body, as that would leave both the head in the skin and cause the tick to empty it’s gut. Always always always pull by the head, as close to the mouth parts as possible. Never use anything to cause it to panic. And take @LutherBlisset 's advice to the fullest. RMSF, Lyme and all other tick-bourn diseases are nothing to toy with. They are lethal to humans and dogs

I bought this a while ago on Amazon, it works really well, and is simple to use. 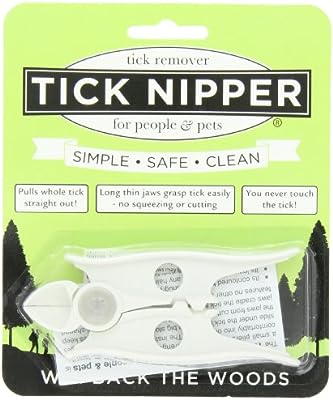 Trouble is that surface desinfection doesn’t help if the buggers inject their vomit into your capillaries. What @mewyn says is also my stance. Don’t fuck with Rickettsia, Borrelia, and especially the tick-borne encephalitis virus.

As far as I know, the latter is not endemic* in the Americas, but for us on the “old” continents, it’s one of the scarier diseases. Anecdote: a colleague of my mother got a tick in her garden. The garden is well outside the zone where the virus is known to occur - I think the high-risk zones are more than 200 km away. Thus, she wasn’t vaccinated. She fell ill after some time, developed a fever, went to bed. When her husband woke her up next morning, so she could take some medication and drink something, she screamed at him because she did not recognize him and was horrified of the stranger.The had been married for more than 30 years. She also did not recognize her children, in hospital, as far as I remember for more than four weeks. It took her more than a year in rehab to be able to work again, part time, as a primary school teacher.

Borellia is also a nightmare. Colleague of mine at my first department caught some, and the infection survived massive antibiotics treatment in his cartilaginous tissue, i.e. in his articulation. He moved like a 75-year old for half a year and had to take antibiotics the whole time, messing with his whole system.

The Americas are different, of course. But I don’t take any chances with this kind of stuff. And you got your own hellish tick-borne maladies over there.

Fucking parasites. While they likely have driven evolution, and I’m thankful for that, I hate them with the rest of my soul.

'*Medically speaking, biologically speaking it’s endemic to Eurasia. I don’t know if it shows, but I am really annoyed by the difference in terminology/semantics.

The best solution is living somewhere with no ticks