Ask an ER doc how often they see popsicle stick injuries of the same nature.

That’s either a 99.9% reduction in use (great job) or someone made up a number.

Ask an ER doc how often they see popsicle stick injuries of the same nature.

Don’t do this then, kids… 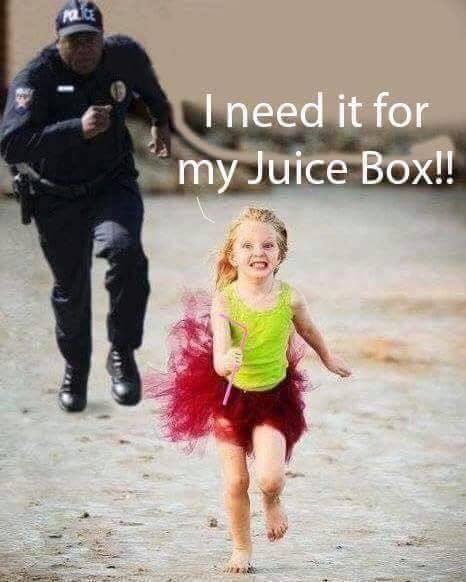 I’d rather fall to the ground carrying a metal straw than, you know, a cup made out of glass. Cursory Googling didn’t reveal the annual number of such fatalities (and indeed, mostly led me back to the metal straw news story).

This reminded me of the very rare, but real, cases of people killed by falls onto upward-pointing knives in open dishwashers (as in Final Destination).

I just cut my hand trying to clean up a broken jar of pasta sauce! We must ban all glass containers to free us from this dangerous menace!

Now, here’s the thing and, don’t ask me how I know, but you could very easily do the same thing with an OG plastic straw, so long as one end of the appliance has an air-tight seal.

So you’re saying your knowledge is not from the standard trick of sealing one end of a straw and jamming the other through an orange’s peel in order to drink orange juice in a slightly impressive way?

Like John Wick needs any more ideas for killing utensils.

I love my colorful array of metal straws. They’re probably more likely to chip my teeth than stab me in the eye.

Falling on things, you say? It was a million to one shot, doc!

Was at a party once where they had drinks with those skinny little plastic straws that give you a hernia every time you try to suck up yer booze. A friend lifted his glass for a quick sip and the straw went up his nose really hard - and and when he pulled down the glass from his mouth the straw stayed stuck up in there - and we laughed! And then the blood started flowing out through the straw - and we thought that was awesome! And then we realized our friend needed some assistance and we helped him and he didn’t die and all was well with the world. But that was pretty cool to see happen - to someone else.

So when buying straws you can use over and over, go with the silicone ones?

I’ve been not using straws since before it was cool to not use straws.

I’d rather fall to the ground carrying a metal straw than, you know, a cup made out of glass . Cursory Googling didn’t reveal the annual number of such fatalities (and indeed, mostly led me back to the metal straw news story).

No fatality, but a friend of mine has a very impressive scar in the palm of his hand, as the result of trying to catch a dropped wine glass, breaking it, and accidentally stabbing himself with the stem. There was a lot of blood, I’m told.

“This was the final straw.” -Woman

go with the silicone ones?

Darn right! I got a few of them at my local bulk barn for $0.99 each. Considering I already have a scar on the roof of my mouth from a plastic drinking straw after someone smacked the back of my head while I was drinking, there’s no way I’d risk metal ones.

Sippy cups for everyone then!

(extra padding characters so I can submit go here)

If this was put in a movie, I’d find it too unlikely to be believable.

it’s worth bearing in mind that even the most banal objects can turn on you in a second if you’re not minding the shop.

Back in my younger days i worked for a coffee shop and during my time there i had cut myself with a straw, a cup lid and also a fork. It really doesn’t take much for normal every day objects to be dangerous.

And also the lady that died, its very tragic and its something i wouldnt wish on any one but sounds like she would’ve severely hurt herself regardless. She must’ve fallen headfirst toward her glass so even if there had been no straw i would assume her head would’ve hit the glass or the table.