Wondering if someone is a narcissist? Just ask them

… dude, poking fun at (#notall) vegans is not the same as racist jokes. Sorry, no.

@telecinese I generally hear that “joke” this way:

“Want to know if someone is into crossfit? Don’t worry they’ll tell you.”

Vegans are not oppressed, sorry, its not even similar.

Re: The vegan thing - generally ANYONE who makes something a lifestyle - not just something they do - is annoying. When it comes to food it could be the bros eating more protein in a week than should be humanly possible and telling me how I need to eat better and get jacked etc, to the raw foodies, organic foodies, what-ever-new-diet-fad-Oz-is-hawking-ies. Pot heads are the worst. We get it - you really like weed. Sports fans, car people, gun people, gamers, etc etc. People where it has gone beyond a hobby to be their identity and they just constantly live, eat, and breathe it.

After all, there’s nothing really wrong with perpetuating stereotypes as long as the bigotry isn’t heartfelt, amirite?

Who doesn’t know (or wasn’t at one point) the newly converted atheism evangelist? There’s a colorful character.

I think it’s just human nature to become overly enthusiastic and defensive about whatever works for us, so it’s nice to be able to laugh about it. Better than the alternative.

This could save a lot of time and pain in relationships.

-Are you a narcissist?
-Yes.
/moonwalks away.

Me. We were brought up godless atheists. But fuck, you didn’t want to meet me when I’d discovered Metal

Did I ever tell you about my heirloom, single source, local, organic tomato paste?

Well, I guess I just did.

So the system works!

Sports fans, car people, gun people, gamers, etc etc. People where it has gone beyond a hobby to be their identity

Sorry, couldn’t keep myself from giggling. I rib thee in light heart, buddy!

Who doesn’t know (or wasn’t at one point) the newly converted atheism evangelist? There’s a colorful character.

I’ve only ever met them online. The most heartfelt atheism evangelist I know in person was raised in a godless house. His father is a Nobel prizewinning physicist, and there was no room for churching in that household. My own loss of faith was gradual and largely unremarked. But your point is a good one, and also applies to the newly converted faithful. They make extra-energetic proselytizers.

I’ve always interpreted vegan jokes in the last ?decade? as hyperbolic dad jokes i.e. dated, exaggerated jokes that lead to more sighs than laughs… They seem to have been born in the 90’s when every other club kid in L.A. would go on endlessly about their vegan diet (which typically lasted all of 3 months). I tend to see vegans and non-vegans use the jokes equally. There is about as much malice behind vegan jokes as there is behind crazy cat lady or sports nut jokes – certainly less malice than gun-nut/fundie/republican jokes that seem deemed widely acceptable. To conflate them with racism seems insulting to rationality and the impact of racism.
My favorite Dad-joke-level vegan joke is 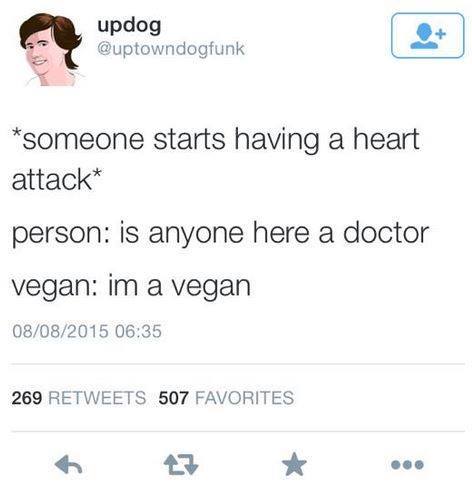 Before I figured out my narcissist was NPD

You have a personal narcissist? What does that say about you?

Edit: I see from your later comment this was somebody leaching off you. Sorry, I was just amused by the image of having someone to do your narcissism for you.

I desperately need a personal narcissist. Can you send me your resume? But don’t talk yourself up to much.

You know what other two things are not equal? Personal, voluntary life choices (eg. veganism) =/= an intrinsic state of being (eg. gender identity, race, disability, etc.).

In my ethical framework, I can criticize the former all I want (and turnabout is fair play, of course) but the latter are to be respected and protected.

Yeah, leeching off me, but it’s the entitlement facet that makes it unbearably narcissistic. I think she truly believes people are put on this earth to pay her way through life.

Re: The vegan thing - generally ANYONE who makes something a lifestyle - not just something they do - is annoying.

Huh? Why are you bothered by how people choose to live their lives? This seems a bit petty and small-minded to me.

Live and let live, brother, as long as their lifestyle is not harming others. And try not to be so judgmental. At least that’s how I roll.

Plus, the world would be boring without many of those people who seem to annoy you so much.

I am not bothered by what other people do nor am I judging anyone. The way they interact with me could be annoying depending on what they are into and what level. Indeed if we have the same interests we could geek out talking about while other people roll their eyes.

But there are some people who don’t take social ques or truly never talk about anything besides the one thing they are into. Which is fine in small doses, but can be annoying in large ones. I find generally it is people who LIVE their interests and consider it one of the things that defines them - vs a casual interest. Like my dad. Loves fishing. LOOOVVESSS fishing. Like hearing about fishing? I hope so because he will tell you about it. Now he’s not as bad as some people as there are other things he does, but if you talk more than 15 min with the guy, fishing will probably come up at some point.

You probably have facebook friends where if a topic comes up on your feed you can tell it was their post before you read who posted it.