Yet another political compass thingy

I’m bored, and it’s raining so I can’t sit in the back garden and read.

Let’s do a new political compass! 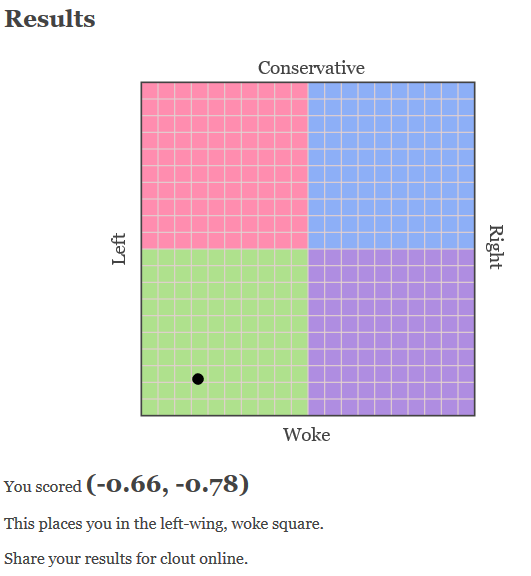 Edit: it looks like it has been made by a TERF, I will be taking the link down because I do not trust what will happen with the data collected.

Second Edit: Re-added link. Follow at your own risk. 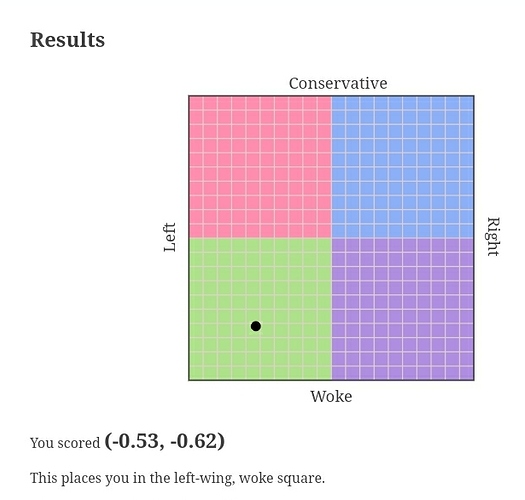 Disclaimer: as a non-Brit I kinda winged the Brit-specific questions.

Disclaimer: as a non-Brit I kinda winged the Brit-specific questions.

I had to answer Don’t Know to a few questions because I didn’t like either option suggested. Yet again, anarchism breaks the test.

I guess I’ll never learn where I am. Also, two dimensions aren’t enough to capture political complexity. An n-dimensional app that projects holographic display from a phone is needed.

Try the LeftValues test, although it only works if you are left wing

Try the LeftValues test, although it only works if you are left wing

“Closest Match: Democratic Socialism” - Can’t argue with that. I wonder how different this would be if I hadn’t grown up in a country where most people haven’t given up on trusting the government yet. 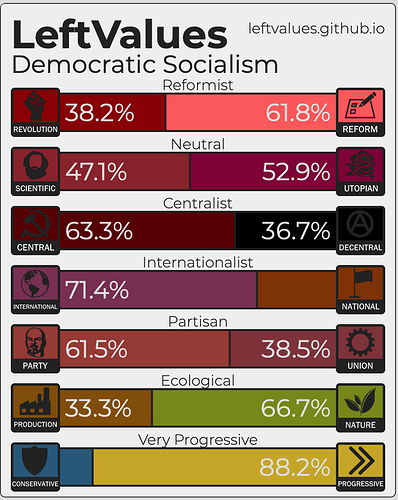 Just did my left values. 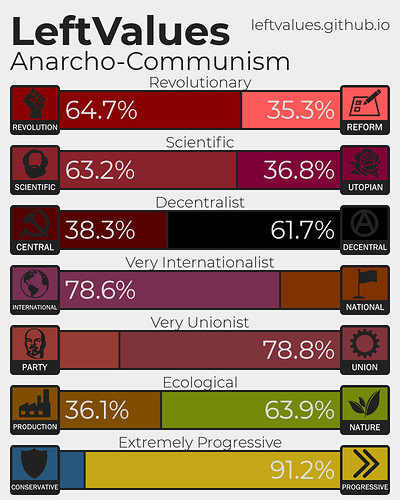 From when I did it earlier this year 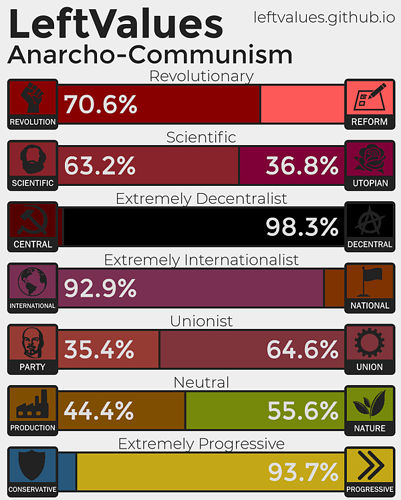 What kind of communist are you? (Quiz)

They say my closest match is anarcho-communism, but also give me a 100% match for council communism and 95.8% for eco-anarchism. I get 0% for marxism-leninism.

I can see why you wouldn’t want to give them any ammunition to use against you, but wouldn’t it be a valid strategy to post the link and allow us to flood the fuckers with a load of responses advocating acceptance and validity.

But, like I’ve said before, I don’t think you can replace the authoritarian-freedom axis with a culture war one, because there are some people who are anti-traditionalist and still very authoritarian about it, or at least they would be if we gave them a sniff of actual power.

Oh, and since we’re doing the other two as well, here they are: 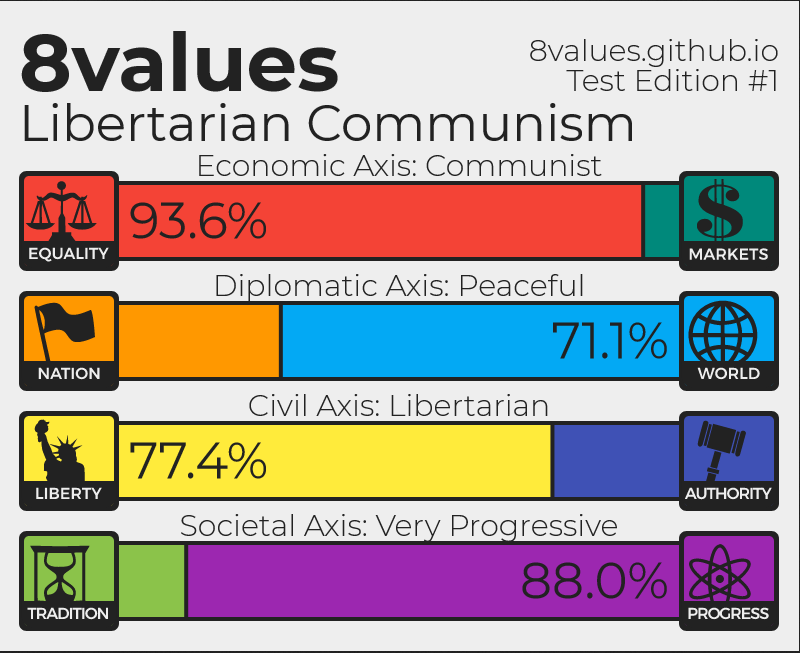 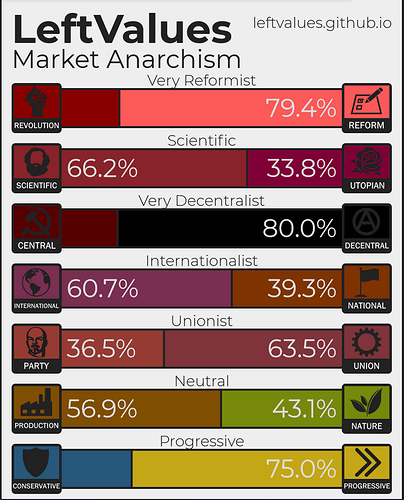 image757×936 244 KB
And LeftValues has me as a Market Anarchist, which just feels wrong. Last time I got my second place result (Centralist Marxism) which seems closer, but is really just saying “Yes, you’re left wing, but we’re having trouble placing you with the other stuff”, which is probably accurate. I’m awkward by nature.
2 Likes
MalevolentPixy July 5, 2020, 12:18am #10

I think Health Care plays a big part of it (especially now!), in that even among the “I don’t trust the govvermint” types, anyone without extreme wealth is very cautious about what for-profit changes and privatization that they consider allowable. It also helps living close to the HC nightmare that is the US (especially now! Sorry, friends, but ya are) to know how bad it is.

Which means that they try to slide it in under the table as “increased access” and “greater choice” but enough of us suspiciously asking “and how were you going to do that?” can put the brakes on that, too.

Americans won’t trust the government with their information, but somehow expect them not to cheat (He says he’ll increase access and give us more money in our pockets). Canadians will trust the government with information, but figure every single one of them is weaselly, so it’s important to know exactly how and whom is actually going to benefit, here.

We also have the advantage of being able to say “Do you really want to fuck with us? Ask the Progressive Conservative Party how well that went.” (Spoiler: horribly for them, and arguably worse for us, because we ended up with the Reform Party and then the Conservatives who keep drifting ever rightwards. It still works as a threat, though, because it took decades and no one wants that happening to them.).

I know my instinct is wrong, but “Market Anarchist” sounds an awful lot like “Anarcho-capitalist”, or to put it more simply: “Feudalist”

but “Market Anarchist” sounds an awful lot like “Anarcho-capitalist”, or to put it more simply: “Feudalist”

Considering the nature of the quiz, either of these is more likely

Mutualism is an anarchist school of thought and economic theory that advocates a socialist society based on free markets and usufructs, i.e. occupation and use property norms. One implementation of this system involves the establishment of a mutual-credit bank that would lend to producers at a minimal interest rate, just high enough to cover administration. Mutualism is based on a version of the labor theory of value which it uses as its basis for determining economic value. According to mu Mut...

I can see why you wouldn’t want to give them any ammunition to use against you, but wouldn’t it be a valid strategy to post the link and allow us to flood the fuckers with a load of responses advocating acceptance and validity.

Even if I did, the answers don’t give results based on reality. They have open borders as a right wing policy and militarism as a left wing policy for example. So they appear to be an ayn-cap as well as a TERF, they believe that socialism is when the government does things and an-com does not exist.

Maybe I will put the link back up later, it’s not like it is the worst political compass quiz I have seen recently.

So, Waitrose is the revolution? I didn’t expect to find a form of anarchism that would be acceptable in Tunbridge Wells, but there we are. 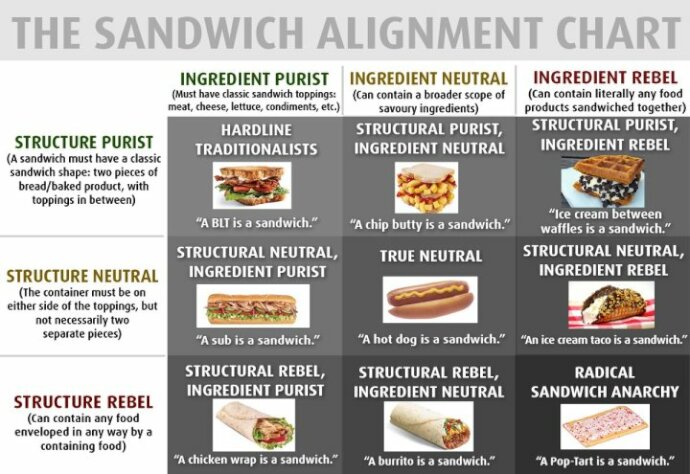 Pickled herring on naan with orange juice pulp is a sandwich.

I don’t do Internet questionnaires unless I’m behind some proxies.

So it says I’m a democratic socialist, with a 96% Centrist Marxism second.
Living in the US where the only choices are D and R, I honestly don’t know whether this matches which party I’d support given the option 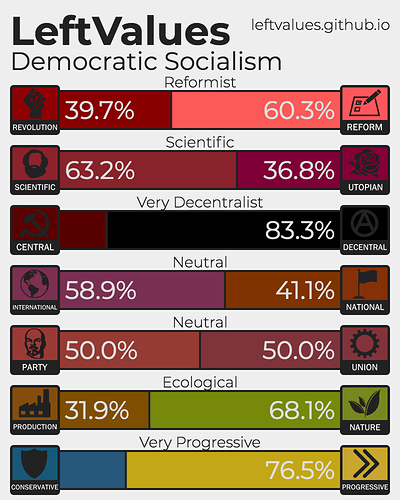 Both of those are so far left of the D party you can’t even see them from a high step ladder and a good pair of binoculars. 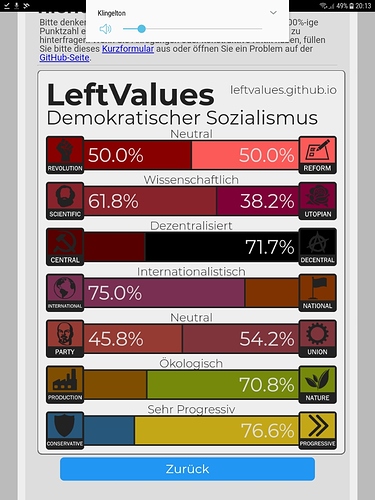