A $4 hose adapter for my kitchen faucet

Garden hoses aren’t generally rated to carry potable water. There probably is a better way to accomplish this.

I think they make a short length of hose for RVs that is safe to drink from.

But it isn’t great hose water unless the hose has been baking in the sun for a few hours – I guess one could coil up a length of it in a large boiling pot.

Garden hoses aren’t generally rated to carry potable water. There probably is a better way to accomplish this.

You are absolutely correct. I use a pvc hose and wasn’t thinking when I quickly wrote the post. I’ve edited it.

I have used one of those. plus one of these (more or less) 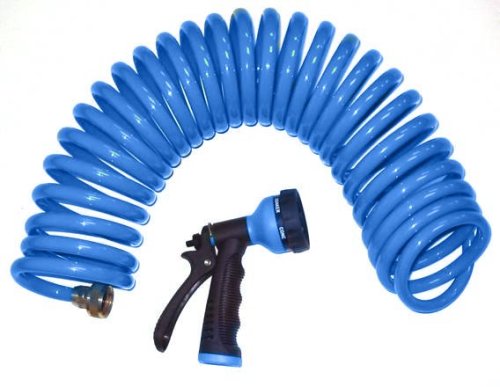 The Orbit 27890 features a tangle-free 25' blue coil hose with a six-pattern sprayer, making for an excellent gift for the new homeowner or busy gardener. The turret-head sprayer quickly adjusts the s ...

to water houseplants with some control. Hosewater is fine for plants, and I do have some big ones.

This looks slightly more elegant than my preferred method of smashing a length of vinyl tubing onto the end of my bottle washer.

I was looking for a $4 horse adapter for my faucet.

I misread the headline. I’m disappointed.

I have a couple brass ones from the hardware store with black rubber O-rings. This one is prettier!

I have the other ones, too, that adapt hose bibs to NPT threads…

A thread adapter is nice. A quick-coupling adapter would be yet better (though more expensive). There are many used in the industry.

As of potable-water grade hoses, anything will do for dishwashing. For using the water, just let a couple of hose-volumes flow through to wash the stagnant leachate that spent its sweet time in contact with the material; the runtime-leached amount of whatever will be negligible.

It adds essential vitamins and minerals to your diet.

And protein, if you’re super lucky enough to get a hose that’s home to bugs!

If you rent, this will get you in trouble with many landlords, and property management offices. Check your lease.

Here are some examples of the couplings, some of them being the quick ones, that could be adaptable to domestic water supply.

If you rent, this will get you in trouble with many landlords, and property management offices. Check your lease.

This MAY get you introuble IF and only if the other side figures it out. Don’t screw up and don’t get caught by other ways and you’re golden.

Based on what? This is less involved than installing a decent showerhead, and even that’s okay with any lease I’ve seen as long as you keep the original and reinstall it when you move out. If you cause water damage with the hose, that’s obviously a problem, but simply screwing in an adapter shouldn’t get you in trouble any more than screwing in a sprayer attachment.

@jlw: A pot-filler faucet installed above the stovetop is not an uncommon feature of nice kitchen remodels. (Also restaurants.) Doesn’t apply to renters of course, but I get the impression you own.

Yes, you can buy hoses specially rated for potable water.

You should be able to buy “Garden Hose” flavored bottle water.

Yes, you can buy hoses specially rated for potable water.

In my experience, they’re generally white… or at least they don’t look like garden hoses.

But I do have to wonder, being one of those apparently terminally-poisoned kids who grew up in the 70s, just how bad drinking out of the average backyard garden hose is for you. I live a short hike from JPL in Pasadena, and until a couple years ago, my tap water wasn’t entirely potable due to perchlorate contamination due to solid rocket fuel being dumped in an outhouse several decades ago (or some similar foolishness). The water’s fine now, but is there something particularly hazardous about garden hoses in general, other than the bit of soil around the end and maybe a few residual earwig turds?

I mean, I’ve washed my hands in gasoline before (not remotely recently), and I think that may have shortened my lifespan considerably more than whatever I drank out of the garden hose. I’m pretty sure there’s not a whole lot more Giardia in my hose bib than there is in my kitchen faucet, so unless the rubber in the hose itself is slowly killing me (or the earwigs, though I do flush 'em out first), I’m not concerned about poisoning myself with hosewater.