Erm… me neither. Did I say that?

“Welcome to America. Everyone wants in.”

From their website (late night section)… props to the copy writer for sneaking in a tiny bit of wit.

Eek. The wigs! The dresses! The joyless, soulless sex bot vibe! A better name would be the Uncanny Valley. 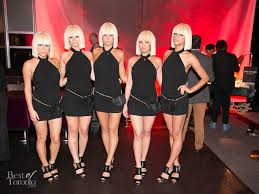 He’s brought the new girl from the office with him

The “girl” is in her twenties. I probably should have stopped there, but it was amusing to see how many of his complaints centered around people ignoring him.

In a week-long renovation, staid Stock will be transformed into hopping, high-class hangout

And had the same bad reviews, I guess they’ve improved the cook and got different staff but did not pay for training. It might be the priciest lunch-for-two in Toronto, but Stock Restaurant in the Trump tower is overvalued.

Somehow I feel like I narrowly dodged a bullet.

Or a penny loafer.