An eccentric genius explains how half-Yeti hybrids have enslaved mankind

You HOOmans don’t know how GOOD you have it!
When X-Day comes and takes US YETINSYNY up in the Pleasure Saucers, YOU SHALL KNOW THEN the enslavement of the remains of “Man”“kind”!!!

I think a lot of people have mined his work. There are spectacularly awful websites out there.

All hail our new half-yeti overlords!

But Phut, the one born on the Ark, had red hair. Red hair and green eyes. Those are the facts.
At this point we leave the harbor of facts for the high seas of rumour (that’s how Noah used to talk, by the way)…There was on board Ham’s ark a pair of simians of the most extraordinary beauty and sleekness. They were, by all accounts, highly intelligent, perfectly groomed, and had mobile faces which you could swear were about to utter speech. They also had flowing red fur and green eyes. No, such a species no longer exists: it did not survive the Voyage, and the circumstances surrounding its death on board have never been fully cleared up. Something to do with a falling spar…But what a coincidence, we always thought, for a falling spar to kill both members of a particularly nimble species at one and the same time.

By yetis, I assume he means Jarosław Kaczyński.

Stanislav Szukalski was certainly something. I have a couple of books of his work and there was actually an exhibit of his work at a college in Orange County, CA not too long ago. It’s crazy and detailed and well thought out - even if he WAS off his rocker a bit.

He was also crazy and bitter and fiercely nationalistic by all accounts. If you dig into his myths and ideas… O man… When you look at ‘crazies’ over time - the ones are are successful are the ones who can get out of their own mythologies. He, unfortunately, took his mythology VERY seriously and it’s what cast him by the wayside of popular opinion.

Eccentric? I dunno, it doesn’t sound like he was rich enough to be “eccentric” instead of merely “crazy.”

Are you sure you’re not thinking of Glenn Beck?

Is there any record of his early epic masterpieces that were destroyed by the Nazis?

Which half? Is there a plug-in only option?

Aww man you beat me by 8 hours! All work and no Slack make Jack a dull boy. 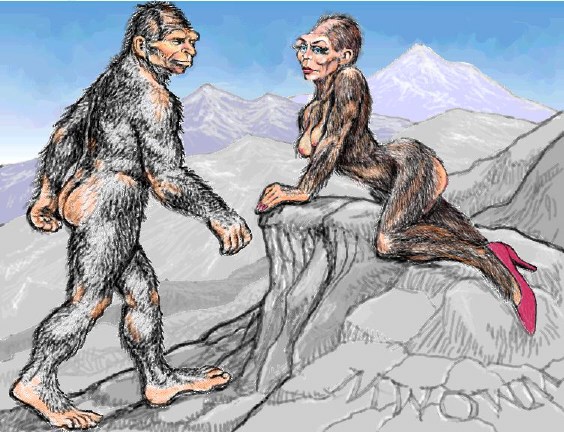 Yeti (Homo correctus) are the ancient ancestors of SubGenii. SubGenii (Homo subgenius) are actually hybrids of purebred Yeti with humans (Homo sapiens), and human-Yeti hybrids are known as Yetinsyny. Almost all SubGenii who exist nowadays are...

Love his work, especially the bronze statues. I haven’t unfortunately had a chance to see them in person.

I wear tin foil underpants since the pyramid invasion in the 19A0s.