(We can assume that anyone reading these threads isn’t concerned about spoilers, right?)

a guy I expected to be dead is only severely wounded.

Which guy was that, I wonder?

Several other heist members appeared to have been fatally shot but many, many people in the Star Wars universe turn out not to be dead after suffering what appear to be fatal wounds that I won’t be surprised if they all return soon.

Oh, is he really dead? I thought getting him to the doctor did it because everyone survives and just gets mechanical parts when they’ve returned.

I felt pretty sure we’ll see more of him and his philosophy.

Yeah, pretty sure he’s for-real dead. Driven home by Cassian being given his manifesto - “he wanted you to have it.”

I thought getting him to the doctor did it because everyone survives and just gets mechanical parts when they’ve returned.

No, no—that only works if you get them to the mechanic in time. 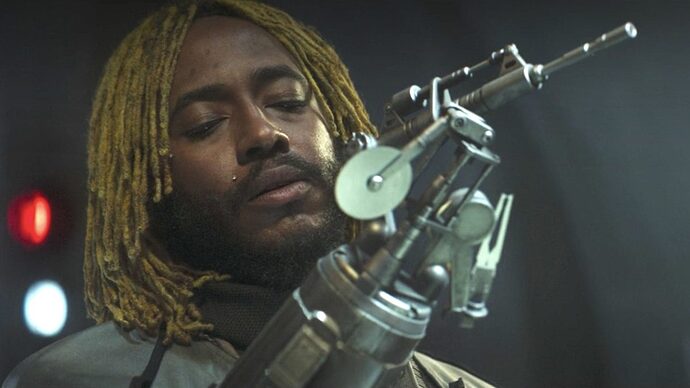 Maybe he will show up with an extra arm where he was crushed.

Fun twist idea: next time someone is grievously wounded they can show up in a later episode with a droid head. And not in a “we saved his brain” kind of way. Just an off-the-shelf droid head mounted to the neck of a human body.

Bout damn time, if you ask me.

He wanted anyone who’d listen to have a copy. Chick Tracts.

Dr. Quadpaw: I did everything I could.
Vel Sartha: Thank you. Thank you for trying.
Cassian: You mean he’s…
Dr. Quadpaw: Better than ever? Indeed he is!

I felt pretty sure we’ll see more of him and his philosophy.

Well, Cassian does have a very similar interaction with a sidekick a few years later. The last thing that Nemik ever said was “climb!” Same as K-2SO. 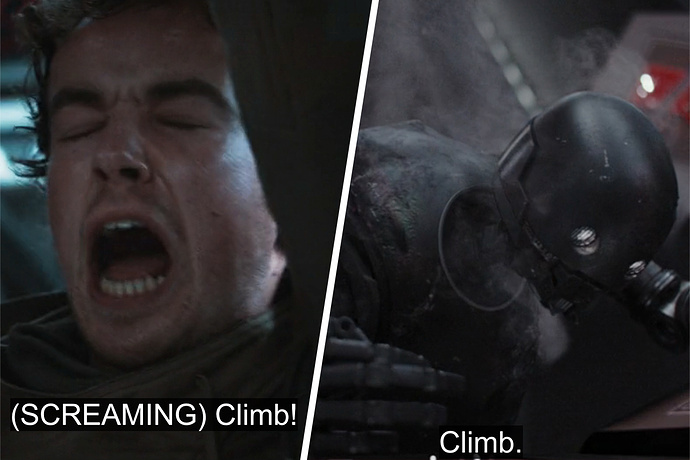 So did Nemik want Cassian in particular to get get his manifesto because he saw something in Cassian that no one else did? And how are we reading Cassian’s execution of Skeen? We haven’t seen a lot of character beats with Cassian so far to demonstrate that he’s more than a just mercenary, yet this act suggests that he is.

Here’s the thing though, if there’s a show where I’d actually expect them to subvert that trope, it’s this one. Especially when you considering how things turn out for Andor and crew in Rogue One.

that episode was as intense as i had hoped it would be, and the Eye event itself was as gorgeous as promised – although i was fully expecting the local populace to suddenly engage in their own uprising (one that neither the rebels-to-be nor the imperials had a clue about), and that additional chaos aids in the escape.

So crushed by imperial credits > lightsaber through the torso

I was thinking much the same except that I thought the unexpected pilgrim uprising would cause another complication for the heist rather than helping.

So crushed by imperial credits > lightsaber through the torso

cut in half by a lightsaber too. No one dies until the spirit of every single Jedi ever rises to extinguish their flame.

honestly, that thought did cross my mind too, but once they were inside i figured it could only help them.

Another possibility that crossed my mind was that one or more of the pilgrims would be killed in the chaos and the rebels would have to face the reality of civilian collateral damage as one of the unavoidable costs of war.