Damn there’s a low budget horror movie in that.
Our half naked heroine is struggling with a Klansman and in the fight pulls off the hood and… Oh. My. God!!! Violins shriek. Crappy makeup effects ensue.

Obviously, there is that! From what little I know of the KKK, their stance has been segregationist, rather than strictly anti-black. (Please… I am aware that this still a racist position, I am not defending it) Basically, they are anti-anyone-who-isn’t-them. So their venom could be directed against anyone they decide is non-white. Their violence against black people is well known because of a relatively large black population in the southern US. But they direct it towards whoever is in proximity. Natives, Asians, etc are not treated any better.

FBI agents should not be using covers

Didn’t this happen for real during the 60s when feds were infiltrating student groups? They’d send in so many people that you’d basically have agent provocateurs getting other infiltrators to commit crimes so both could report one another?

More practically, I worry that they might incorrectly identify someone as being part of the KKK or these affiliated groups.

I’m sure the irony of Anonymous taking away the Klan’s anonymity is not lost on them.

Always wondered how they get those white hoods to be so pointy and to stand up so high?

I am not seeing the problem.

As some have said: fuck 'em.

What if that’s the entirety of the Klan these days? It’d make for a good comedy, methinks.

Anonymity is not a philosophy, it’s a tactic. There is no more irony in Anonymous de-anonymizing Klansmen than there would be if the Klan managed to out Anonymous members. Anyone who choses to be anonymous – whether to promote racist terror or to fight it – is always risking exposure.

Fortunately, Anonymous seems to have better technical chops than the Klan. Sunlight is the best disinfectant, motherfuckers.

Fairly sure The Onion did a piece that was like that, bar that the majority were Journos instead of Feds.

All except Oblio. That’s why he has Arrow.

Not sure how damaging dis-identification could be.
Indeed, the mere possibility of mistakes means we will see an a lot of activity from both mistaken and actual members doing all they can to distance themselves from the KKK.
If the data dump was delivered with 100% accuracy you’d risk gluing the members tighter together into a far more extreme terrorist group. The possibility of a mistake would be the saving grace for a bunch of muppets who joined on a whim and now will be given chance of getting out and make mends - which could be the biggest damage to the KKK.

Our German domestic intelligence agency had/has so many informers and contact persons within the upper echelons of the right-wing party NPD that the constitutional court dismissed the prohibition lawsuit in 2003.

Is Jimmy Carter on the list? Also, Ann coulter and James Buchanan.

Stop “threatening” and just do it. Make the identity of these little men with small penises and white robes public. I’m sure there will be a number of politicians and religious leaders on the list.

If the data dump was delivered with 100% accuracy you’d risk gluing the members tighter together into a far more extreme terrorist group.

Aren’t they already in the KKK? It isn’t like it’s a big organization with a lot of other interests. The article below says that the SPLC estimates the total KKK membership to be around 5000, so we are talking about 1/5 of the members. 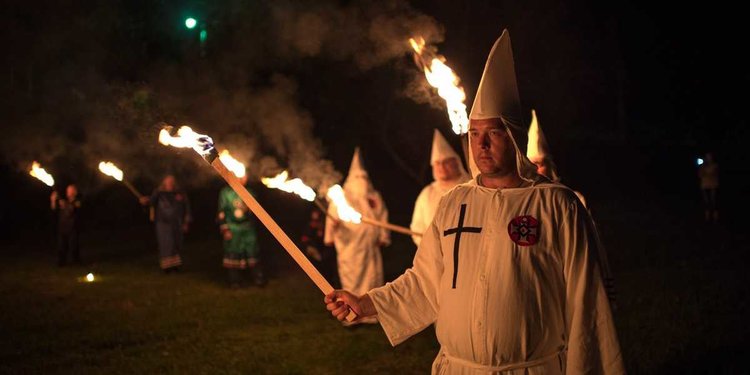 This hate group still has thousands of members in the U.S.

I worry that if there is a substantial lack of politician and law enforcement in the roster, that this will be somehow misconstrued by some as evidence of the lack of coordinated racism in those institutions.