Putin might consider it an insult that the simple word underestimates the scale of his body count.

probably as close as we’ll ever get to a West Wing style of administration. Psaki is definitely our CJ.

Is that Peter Doocey asking the gotcha questions again? I can hear it wasn’t the backpedaling “many Americans are saying” CBS reporter, but I don’t know the voices of the press pool well enough to know who it was this time.

Not Doocey, but I can’t tell who it is. I’ve read elsewhere it’s someone from The Intercept. 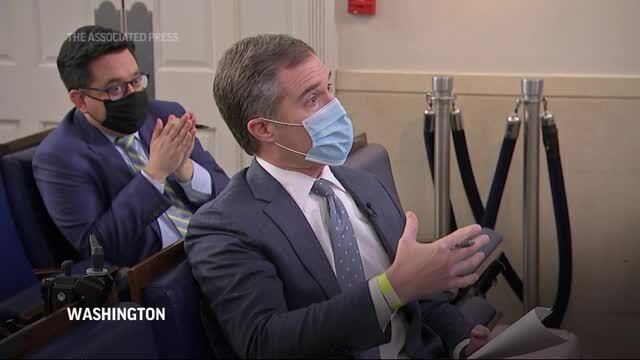 Former guy: ‘Bounties on US troops? So what?’

Biden: “I would agree that Putin is a killer”

There’s the personal and then there’s the diplomatic. Obviously Putin tries to have his political opponents killed and probably enjoys the sense of fear that creates. However, the Russians are making a big official stink over what Psaki correctly described as Biden’s direct answer. I wish Biden had been more circumspect or at least sardonic in his answer, but it’s done.

This is a heart, right? Or should we call it something else…I dunno, maybe call it what it is. 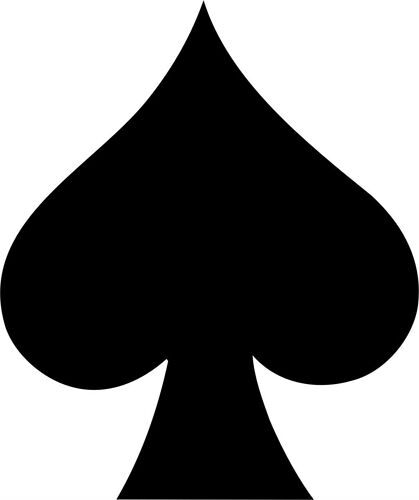 Man, she must have spent years working on that “You’re a fucking idiot” smile.

Russians are making a big official stink over what Psaki correctly described as Biden’s direct answer. I wish Biden had been more circumspect or at least sardonic in his answer, but it’s done.

What value do you see in not pissing off Putin? I’m actually serious, not trying to be an asshole

She needs to start handing out dunce hats. Really…

If Russia pulls its ambassador (as I read they’re seriously considering) or engages in other acts of diplomatic retaliation, it’s a real problem. Innocent Americans now in Russia could be imprisoned, ongoing arms control talks could be de-railed. That’s why world leaders aren’t usually this blunt and direct about other heads of state and premiers unless a state of war exists or is about to.

I don’t care if Putin is personally pissed off, and don’t hesitate to call him what he is. I’m not a high-ranking government official, though.

He’s on the next flight to Russia’ville as I write this, no big woopdidoo/lose.

Yeah. I mean I disagree with American imperialistic interference in elections in Eastern Europe that was heading Europe towards war, but honestly, I have no problem with above board honesty calling out that murderous thug for what he is.

Particularly since their response was to wish him good health like gangsters looking for protection money.
ETA
Russia isn’t that important. Particularly when oil prices are down. Diminish their importance with soft power. They don’t have the hard power to take you on in any way.

Innocent Americans now in Russia could be imprisoned, ongoing arms control talks could be de-railed.

yeah, we’ve been going through this in Canada with the Meng Wanzhou incident. Ironically, Justin’s dad started the diplomatic relationship with the West and Communist China, in the expectation that free enterprise = free “dom” . We are not so naive now, are we? Personally, I love much about China, have or had a few friends from there, but I can’t feel good about the nature of the West’s relationship with the government (i.e. I think it should be distant and cold)

If Winnie the Pooh is willing to play those kinds of retaliatory games over a perceived diplomatic slight, you can bet a thug like the Shirtless Wonder is, too.

Distant and cold is diplomatically acceptable, and detente doesn’t mean everyone is suddenly besties. There’s wiggle room, too. In this case, a better answer would have been something like: “well, his political opponents certainly have a tendency to encounter rare nerve agents, poisons, and radioactive substances.” Same message, funnier (because it’s true), and the Russians can’t really say it’s a defamatory statement and feign outrage.

“Diplomacy is the art of saying ‘Nice doggie’ while looking for a bigger stick.” – attributed to Will Rogers.

Trump had a warm & fuzzy relationship with Putin but that didn’t stop Putin from taking action against American interests up to and including having our troops killed and continuing to destabilize our election process.

You can’t build a relationship of mutual respect and accountability on a foundation of supplication, deference and flattery.

I was in Russia for some time, very intimate with there verbal vernaculars, and “wishing good health” to someone is the same as saying “I’m out to get you” or “I’m fu#king going to kill you”. Just so we understand what Putz is saying here. Putz is a methodical murdering psychopath, the evidence is irrefutable at ad nauseam. Please don’t fall for the pearl necklace clutching and sweaty hand wringing by the media & Russian fan boys.

This is the kind of garbage the GQP/KKKpublicans/Putinfanboys are posting on social media. 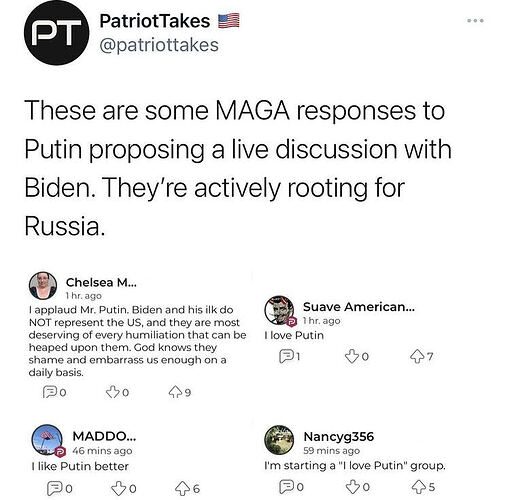