Another installment in Fortnite's Summer Skirmish

Am I the last person on earth who doesn’t know what the Fortnite hype and the connected term “battle royale” are about?

And should I care?

Chrome handles the multiple streams better than Firefox, by a mile

Battle Royale is just a format where you have X number of people in an area and the last one standing wins. Some times you can have a squad of 4 or team of 2. Fortnight and other games also make it where the arena slowly shrinks as you play, as to funnel the last players together.

It’s a fun irreverent tournament style FPS that set itself apart by introducing a shrinking arena and the ability to demolish and build structures while you fight to be the last player standing, sometimes described as Counterstrike meets Minecraft.

It sounded like Unreal Tournament on a spatial diet when @Mister44 described it. Minecraft, another thing I’m out of touch with, makes it sound… constructive.

Anyways, I have to pass on this, of course.
These days, I’m glad if I find enough time to be on the BBS, to find out about the things I haven’t got time for.

There’s something weird about BB’s enthusiasm for this kind of zero-sum slaughter-all-comers game. Is this where the capitalist impulse goes when it’s repressed, or is there … ahem … actual money involved? 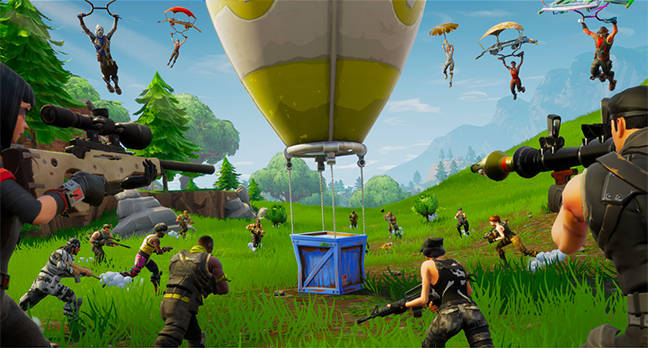 Android version of super-game will come direct from Epic

Fortnite is third person, not an FPS.

It probably has to do more with the fact that it’s a ton of fun.

Fortnite is third person, not an FPS.

My mistake. To me they seem the same.

There’s something weird about BB’s enthusiasm for this kind of zero-sum slaughter-all-comers game.

You must be fun at LAN parties.

My mistake. To me they seem the same.

Well, close in play style yes, but one is, well, first person, and the other is third person, from over the shoulder.

It may sound relatively banal, but I really don’t tend to like 1st person games, but I have definitely had some fun playing Fortnite.

Yeah, I grok the difference. It just isn’t something I normally consciously think about. I suppose I prefer FPS all things considered, but then again part of the fun of Fortnite is see your character get down.

I’ve played a few games where you could switch between first and second (and sometimes third) person. It was useful, but a bit cumbersome.

There’s something weird about BB’s enthusiasm for this kind of zero-sum slaughter-all-comers game.

Well you can only say “brothers, stop fighting, that’s what they want us to do!” so many times before people stop asking you.

I have a number of friends who can not make the FPS to 3rd person swap for FN. Destiny 1/2 they are raw killers, great at PVP and PVE – can’t aim to save their lives in FN.

Yeah, I find aiming pretty difficult in Fortnite. But I don’t think it’s the perspective so much as the fact that the physics of traction haven’t much improved in the last twenty years. The polygon count keeps increasing but the characters still look like they’re sliding around on frictionless turf. It’s a really odd deficiency in the physics engines of games.

FN has considerable bounce and player movement, AND hitboxes are dynamic as well. A hand in the air while swapping weapons can block a headshot. Took me a while to realize why running streamers were constantly switching weapons.

First shot aiming vs rest of clip weapon performance is also a dial Epic likes to twist, so aiming in FN is a thing.

Bloom is real, the cake may not be.

I find it takes a certain rhythm for each fun to find a sweet spot. Wide open trigger is rarely a good idea, unless its a minigun.