Hell yes. And the DC Bar should revoke his license.

She is absolutely not wrong. I have a hard time seeing even a single Republican senator getting on board with this plan though.

It sure would save a lot of people a big headache if Justice Thomas decided to step down for health reasons right about now. 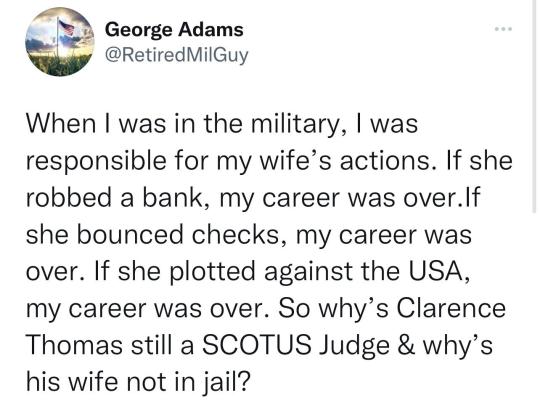 “Should EVER do the right thing in his professional capacity”?

Fat chance. As we knew at the outset, when he claimed that hearings about Anita Hill’s entirely credible sexual abuse claims were a “high tech lynching.”

Yeah, asking who put pubic hair on his can of Coke is super high-tech. /s I had to Google to make sure it was the same guy but yup, totally was and totally tracks.

If Republicans think making up shit about the president’s son is grounds for removal, then actual crap from a Supreme Justice’s spouse is more than sufficient.

I foresee big changes for the Thomases. Namely, impeachment for him and hanging for her.

Wait, do they still hang traitors?

Thomas will not resign, especially with a Democrat in the White House. As long as he’s still breathing, he will hold on until an R is president. Hypocrisy, ethics, appearances, professional decorum, shame, self-respect are all not factors guiding this man.

the DC Bar should revoke his license.

It would not matter at all were that to happen. You don’t have to be a lawyer to be a justice-- you only have to get sworn in.

It would not matter at all

It would definitely matter to him. And to the other Justices.

I have a hard time seeing even a single Republican senator getting on board with this plan though.

i think this is right, but why make it easy on them to abandon their duty?

The only concern I have is that Rs have a very tit-for-tat reflex. We ask for rights for people of color, they decry imaginary discrimination against white people. We impeach Nixon for sanctioning burglary of an opposing candidate, they impeach Clinton for the meaning of the word is. We investigate Oliver North for illegally selling Iran arms to fund right-wing Contras in Nicaragua, they investigate Benghazi for some reason. We question Supreme Court nominees for credible accusations of sexual assault, they question Supreme Court nominees for made-up racist baby fever dreams. We impeach a Supreme Court Justice for dereliction of duty, they…

The only thing that makes it all work is strong moral judgement and commitment to put country over self. I don’t trust Rs to do that. That doesn’t mean D’s should stop.

He won’t do anything unless Scalia (or his ghost) tell him to.

Wait, do they still hang traitors?

No, they’re condemned to an eternity of being talking heads on cable news shows.

And, practiclly speaking, there’s zero chance of an impeachment. I mean, boof-boy lied to Congress, and they haven’t done anything about that either. Thomas could use his health as an excuse to get out without going through that, but yeah, he won’t willingly give up his seat with Biden able to pick his replacement.

Sadly it will probably not go anywhere but yes I agree

He might care, and the other justices might care, but nothing would change. No impeachment, indictment, or accusation would ever lead to conviction and removal by the Senate, and he won’t leave on his own. I’m not saying the DC Bar should not kick him out, but that the political situation won’t change because of it.

Congress never got that far. Nixon had enough respect for our institutions to not put the country through that and the Republicans in congress turned against him when it became clear just how involved he was in the plot. The GOP at that time still had some decency, which was not the case since Reagan aligned with the religious far right. The post-Reagan GOP is a whole different organization that has fully given into the worst impulses of conservativism. The Clinton impeachment wasn’t retaliation for Nixon, it was the worst aspects of us-vs-them politics.

Nothing stops him from being arrested or incarcerated. If he won’t step down, he should expect prosecutors to throw the book at him and Ginni.

Of course nobody knows what the procedure is if a Supreme Court justice is charged and tried under ordinary federal criminal proceedings.