The announcement-tweet didn’t make it through: 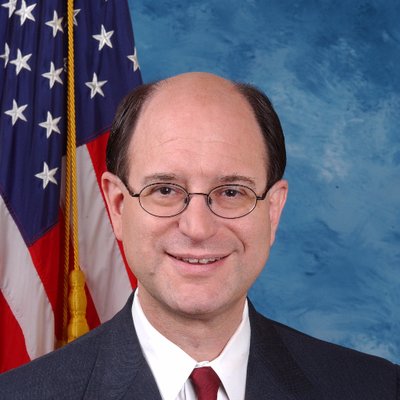 I have introduced H.Res. 438 Articles of #Impeachment of Donald J. Trump for Obstruction of Justice. Statement here: sherman.house.gov/media-center/p… https://t.co/yUTDAnPFuJ 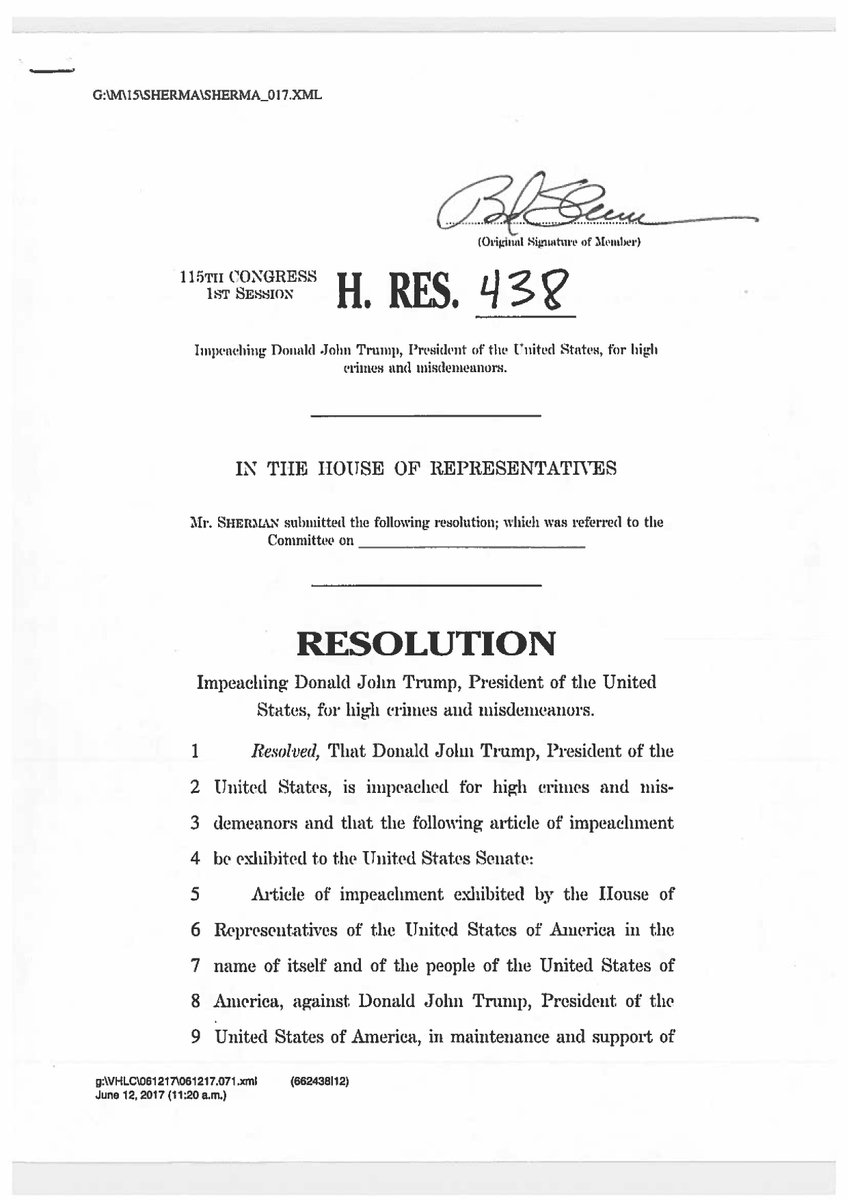 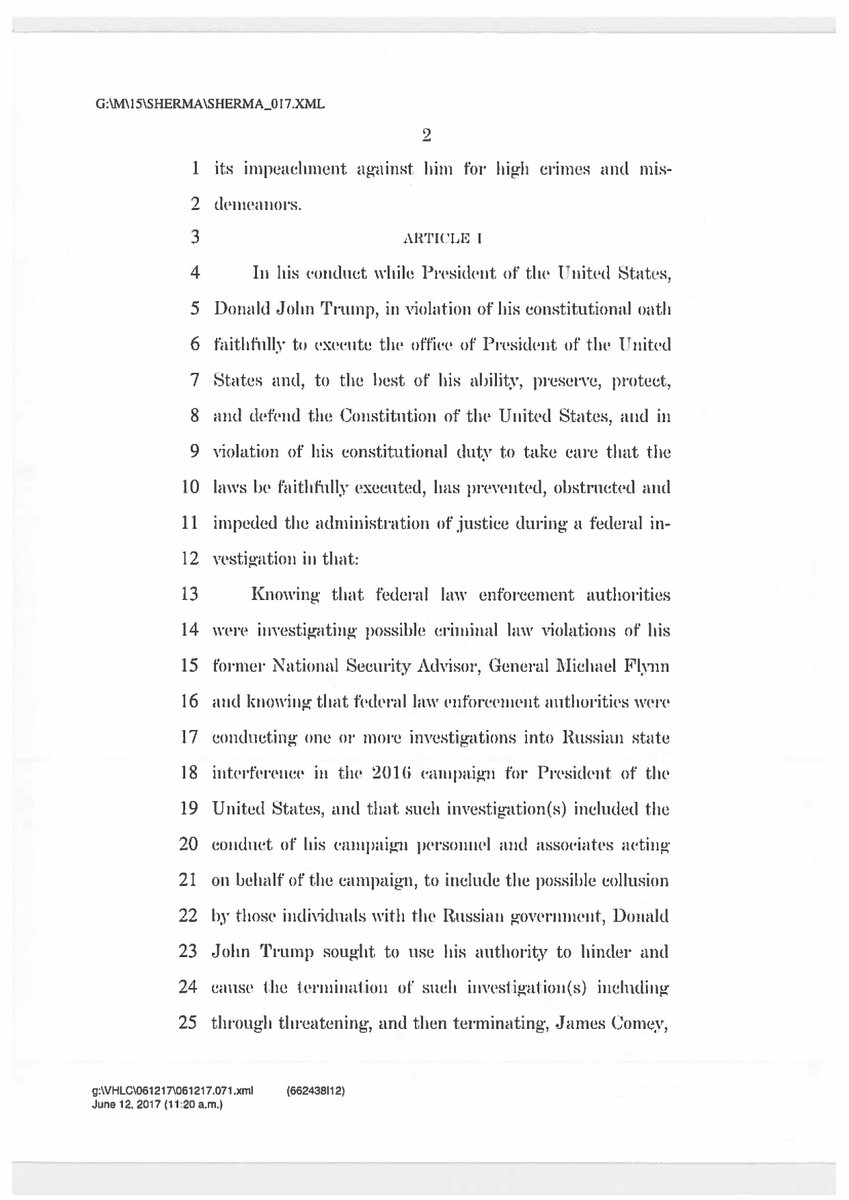 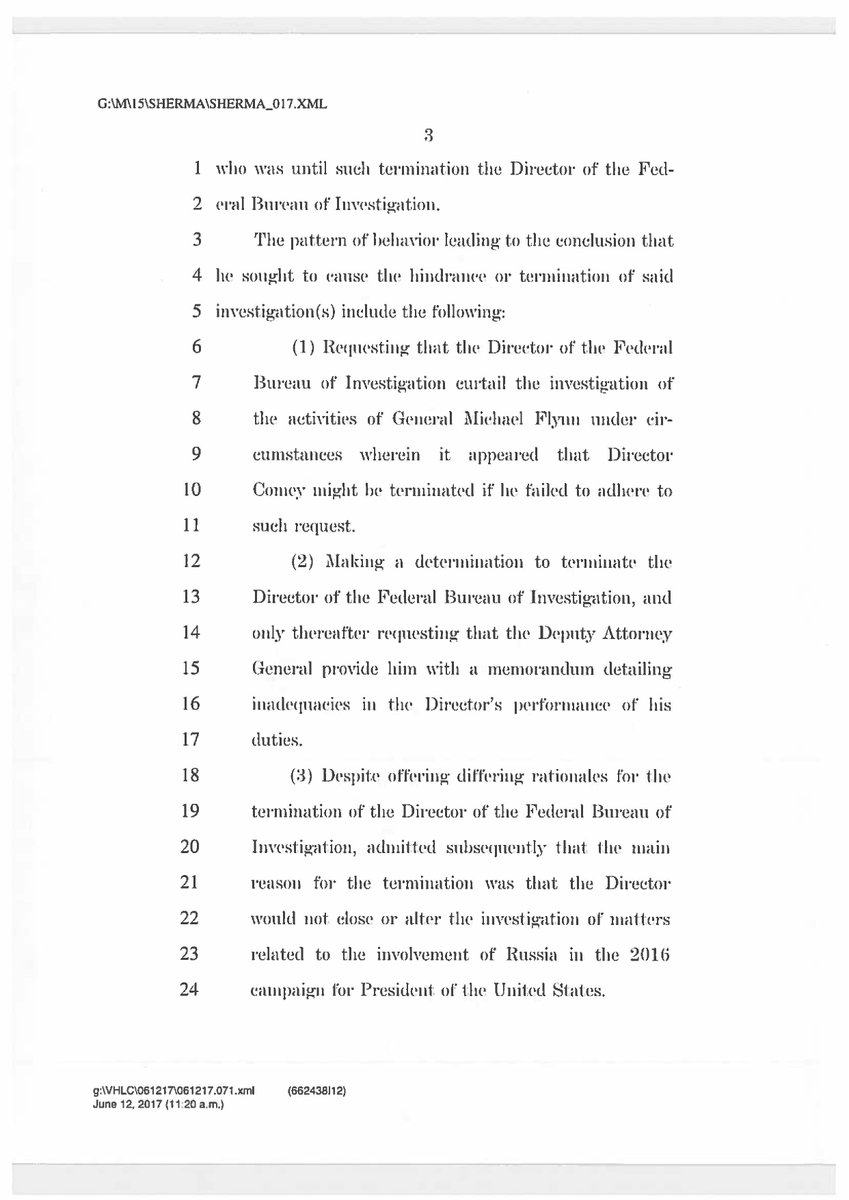 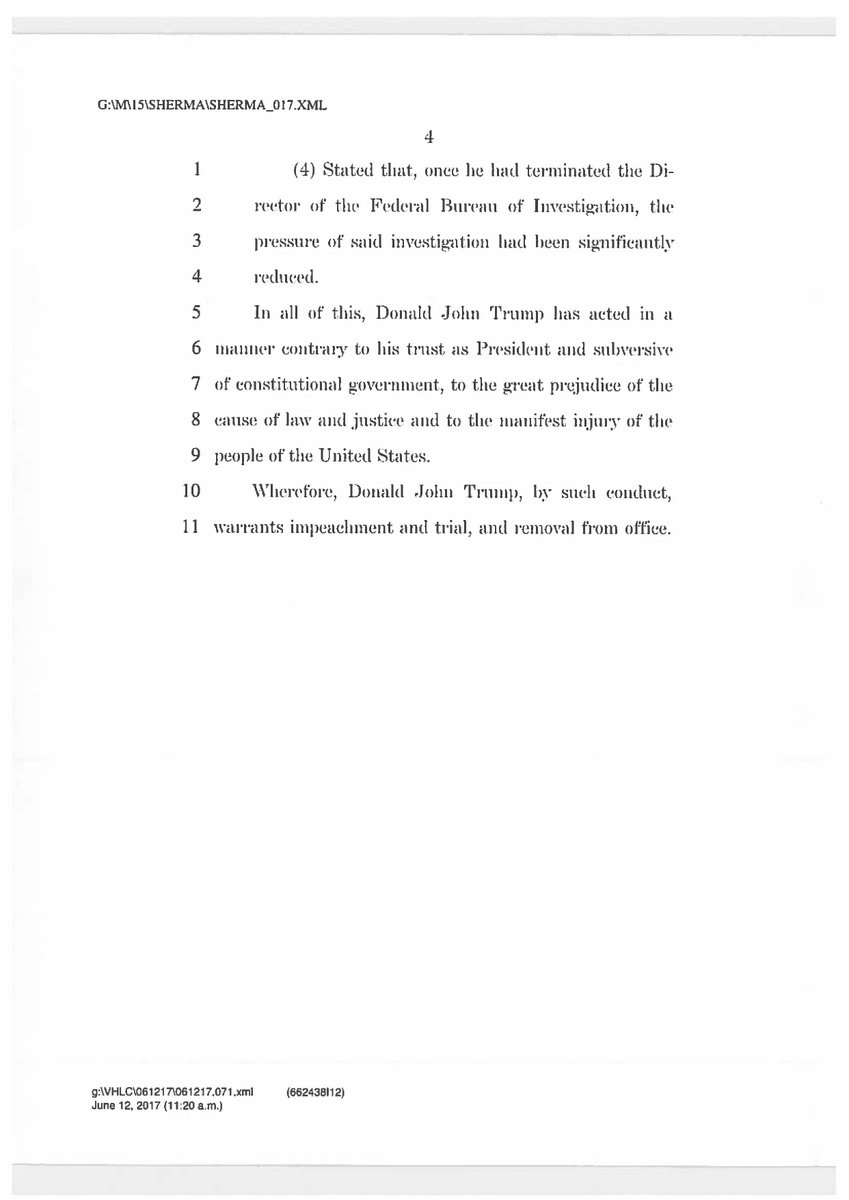 Weren’t there a few other impeachment filings made?

At this point, a naked Trump could bust into the National Zoo, strangle a bald eagle and rape the corpse in front of horrified school children and still only get a few mild tut-tuts from the GOP leadership. It will take a threat to their agenda and hope for 2018 to make them realize he’s got to go.

And before all the Negative Nancy’s start doing their overly-eager “butt wiggles of doom,” I don’t actually expect anything meaningful to really happen any time soon, but with the metric fuckton of unbelievable fuckery that’s happened in just the last 6 months, offcial impeachment proceedings (at the very least) are long overdue…

That’s why it hasn’t happened yet. They know that the Republicans close ranks and they can’t even get a majority, so all that happens is that it gets shot down and the republicans have “Well you tried impeaching him before and it didn’t work. What has he done that’s so much worse now?” In the playbook. If he’s not acting on party guidance I could imagine a bunch of democrats shooting it down too if they can.

Nothing will come of this. There’s not enough evidence to support a claim that he tried to interfere with an investigation. There might be a chance if they went after Drumpf for violating the emoluments clause because God knows there is a plenty of evidence he is doing that and that he has absolutely NO intention of ever observing it. But Comey’s firing isn’t enough.

But if he touched one hair on the head of a panda, there would be hell to pay from the PETA hit squads.

So… posturing or an actual thing that might work? Anyone know?

I think the wisdom of the masses has said earlier in this thread that this is unlikely to go anywhere.

The only way he’s getting impeached is by the hand of his own party. Which means he has to do something that threatens them.

Carrots and sticks. Right now, no one is offering any carrots. So GOP members are stuck, just as you say, weighing the threats.

But here’s a heretical thought: Assuming you normally wouldn’t, would you be willing to vote for a Republican who voted for impeachment? Would you be willing to give political cover in this one instance? If not, then you aren’t part of any Republican’s calculations. And if you wouldn’t vote for them under any circumstance, you aren’t part of there considerations. Ever.

Seriously, as long as people are so polarized (on both sides) that they won’t consider voting for someone on the other side no matter what, there is no incentive for politicians to listen to the other side.

Hold out a carrot, if you can stomach it, and things might change.

In Peach and Mint you say?

Which means he has to do something that threatens them.

Apparently becoming Russia doesn’t bother any of those assholes as long as they are getting rich.

Apparently becoming Russia doesn’t bother any of those assholes as long as they are getting rich.

I see you understand the situation well then.

I sure hope you’re wrong about nothing meaningful coming of this, but I’m not going to be holding my breath either. I just hope that he and his malignant tumor of an administration gets removed from office before they manage to do lasting damage… or start world war III. Trump has already shown that he’s pretty aroused by the fact that he can order things to explode, and I fear that it’s not a matter of if, but when he’ll decide to start or escalate an existing conflict.

I might also add that there are some of us who are reasonable, rational, people who were very suspicious that Trump was colluding with the Russian government even before the election. There was a lot of pretty suspicious traffic going back and forth between Trump IPs and ones owned by people affiliated with the Kremlin, and Trump’s openly “wished” that Russia would intervene on his behalf during the campaign trail. Given what we’ve seen so far, I have little doubt that at some date far in the future we’ll find out that the election was in fact rigged to some extent, but in favor of Trump. Whether that means direct vote manipulation or not, I’m not certain, but I think that the intelligence community knows a lot more than what we’ve been told, and I think they’ve known it all along but have had to keep it under wraps because that kind of thing could trigger a civil war. That is, of course, dependant on there still being people around to release and read the information, which at the moment doesn’t seem guaranteed.

I see you understand the situation well then.

As long as the Stock Market is ticking upward and or level he is golden. When it starts to nose dive is when the shit will hit the fan.

Trump’s middle name is John? I was sure the J stood for Judas

As long as the Stock Market is ticking upward and or level he is golden. When it starts to nose dive is when the shit will hit the fan.

Exactly this – Trump and his billionaire friends are obscenely rich on paper and through their holdings. As long as Trump’s blustering and grandstanding keeps their wealth shiny, they’re more than happy with him. They won’t hesitate to throw him under the bus when he does something that makes stocks plummet.