So. Um. Alex Jones’s phone data, in the hands of the plaintiffs in his Sandy Hook defamation suit.
Data going back about … three years-ish.

Well, THIS should be some fun data for the committee to request. 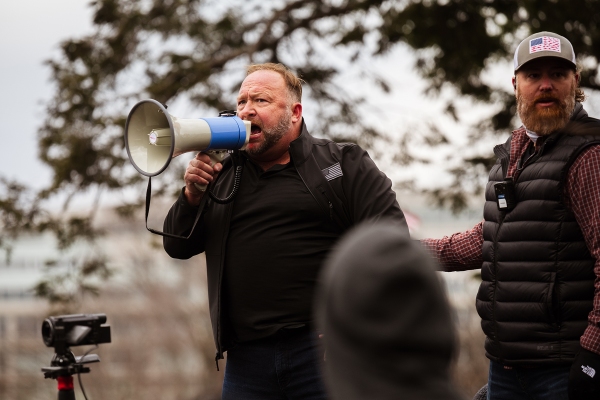 Jones’ lawyers in a Sandy Hook defamation case fumbled three years worth of texts and emails. The committee would like to know more about any contacts with Donald Trump’s team regarding…

His texts, etc. would be the stupidest Insurrection Rosetta Stone ever.

Wouldn’t that be something if that moron brings them all down. 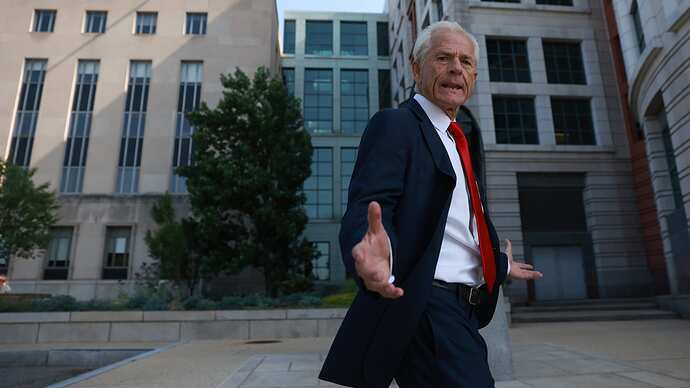 But His Emails! Feds Go After Peter Navarro’s Secret Inbox

The Trump loyalist is facing yet another legal headache, this time over the private email account he used to conduct official White House business.

Former Trump advisor Peter Navarro, already facing trial for contempt of Congress, is sued over his refusal to turn over White House emails. 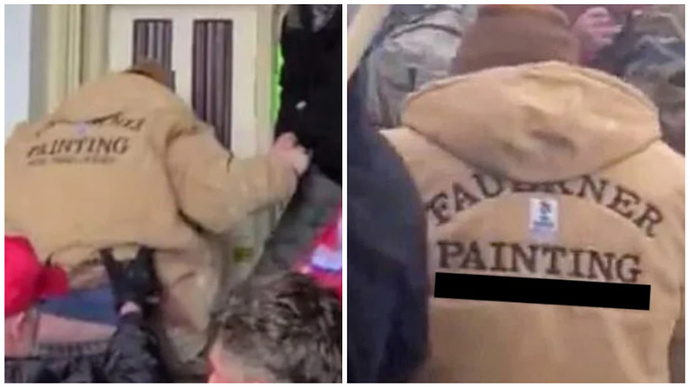 An Ohio man who was caught on security video kicking in a window on the U.S. Capitol building during the Jan. 6 riot — all while wearing a jacket displaying his last name — pleaded guilty in a D.C. federal court this Friday to destroying government...

Maybe this link should have gone here instead of in a new thread?

Fulton County District Attorney Fani Willis laid out fresh details in a new federal court filing about why she subpoenaed Lindsay Graham for testimony before a Special Grand Jury investigating possible election interference. Willis’ attempt to enforce Graham’s testimony is the latest step in her rapidly escalating investigation of Trump and his allies over their efforts to flip Trump’s 2020 defeat in Georgia into a win and collect the state’s 16 electoral college votes. Willis may be attemptin… 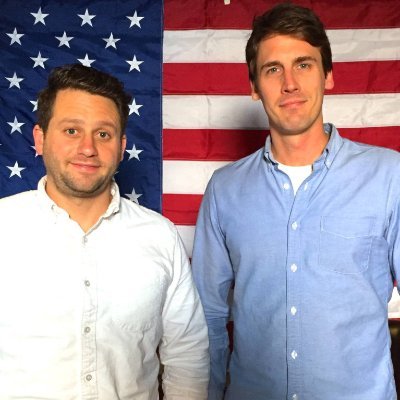 @TheGoodLiars
We put up some signs for “Josh Hawley’s Morning Cardio Class” at CPAC. https://t.co/OI9azJ3pUd 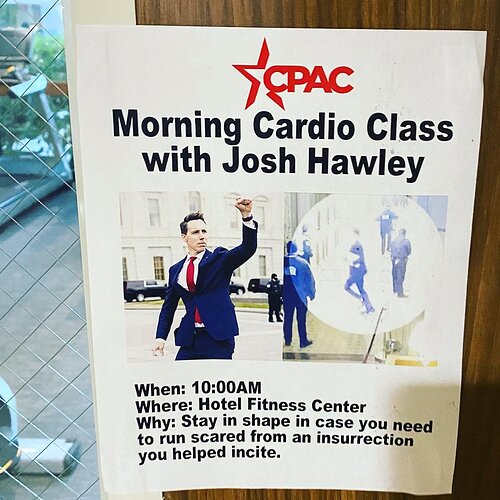 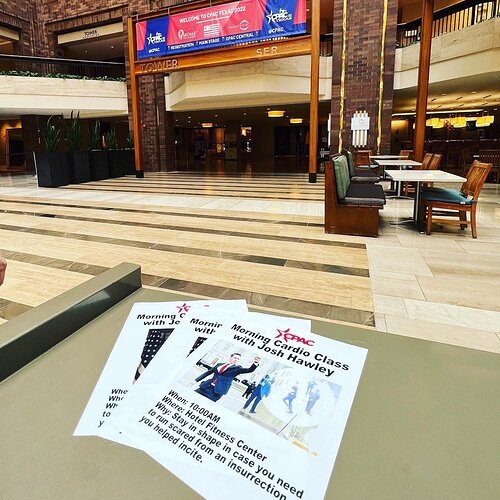 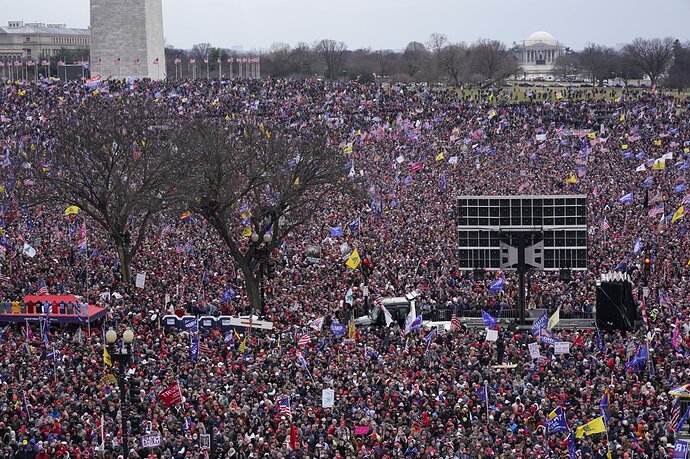 A Maryland man described by the FBI as a “self-professed” white supremacist was sentenced on Wednesday to four months of incarceration for storming the U.S. Capitol while wearing a court-mandated device that tracked his movements, court records show. 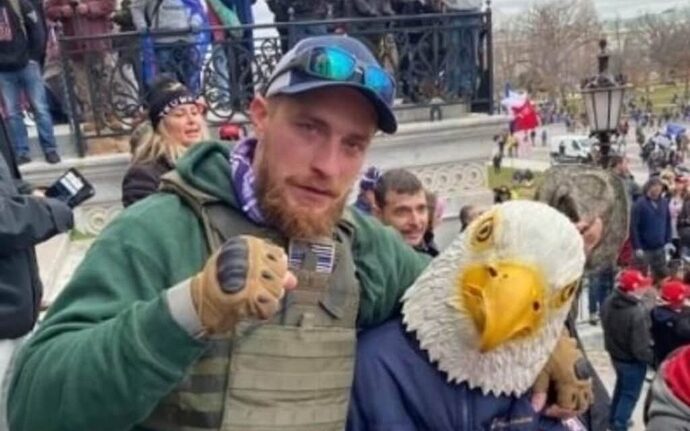 Prosecutors cited a previous article in the Sun Journal as a significant reason for cracking down on this guy. He bragged to the paper about being at the riot, then lied to investigators.

Merrick Garland will be making a statement at 2:30 about the Trump enforcement action.

storming the U.S. Capitol while wearing a court-mandated device that tracked his movements

Every time I think it can’t get stupider… 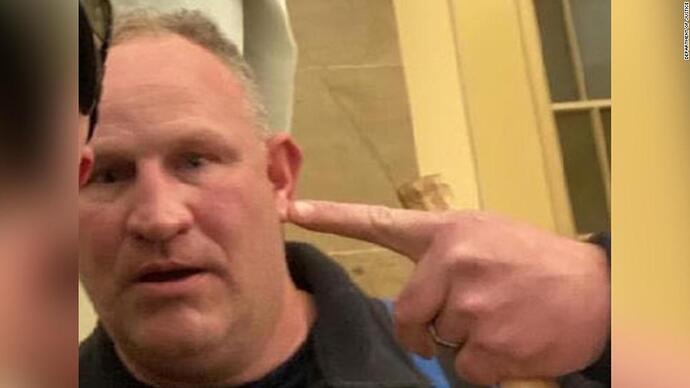 A former Virginia police officer who was fired after breaching the US Capitol building on January 6, 2021, was sentenced by a federal judge Thursday to more than seven years in prison.

While he was briefly out on bail, he was stock piling weapons and talking about civil war, so he’s already been incarcerated for over a year. Glad he has more to look forward to.

Good to see some of these guys getting actual sentences. Maybe scare the rest into cooperating up the food chain. A guy can dream, right?

Every time I think it can’t get stupider…

There is no bottom to the barrel. 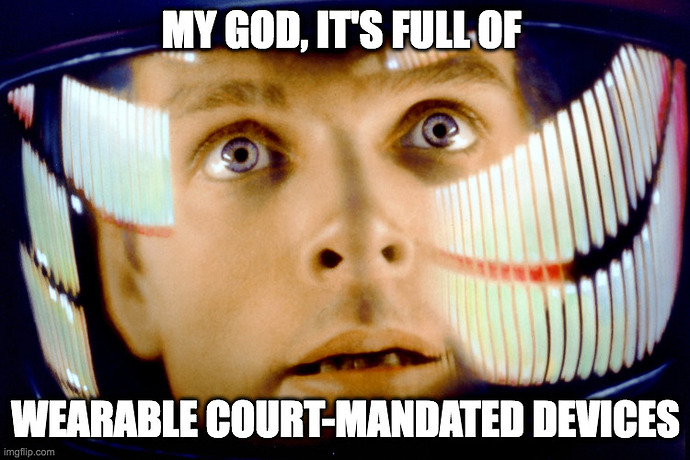 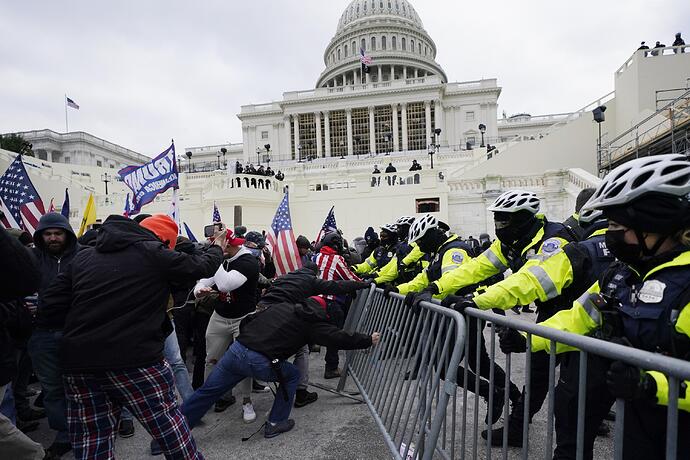 Some Capitol rioters try to profit from their Jan. 6 crimes

Facing prison time and dire personal consequences for storming the U.S. Capitol , some Jan. 6 defendants are trying to profit from their participation in the deadly riot, using it as a platform to drum up cash, promote business endeavors and boost...

Ronald Sandlin, a Nevada man charged with assaulting officers near doors to the Senate gallery, posted on Facebook that he was “working out a Netflix deal” to sell riot video footage. Later, in a call from jail, Sandlin told his mother that he had met with right-wing author and filmmaker Dinesh D’Souza and was in contact with podcaster Joe Rogan. He also asked his mom to contact publishers for the book he was writing about the “Capitol incident,” prosecutors said.

“I hope to turn it into movie,” Sandlin wrote in a March 2021 text message. “I plan on having Leonardo DiCaprio play me,” he wrote, adding a smiley face emoji.

“I hope to turn it into movie,” Sandlin wrote in a March 2021 text message. “I plan on having Leonardo DiCaprio play me,” he wrote, adding a smiley face emoji

“We should not have people in office who do not believe in facts and truths and modern science that are able to manipulate and risk the entire future of this entire generation,” DiCaprio said. 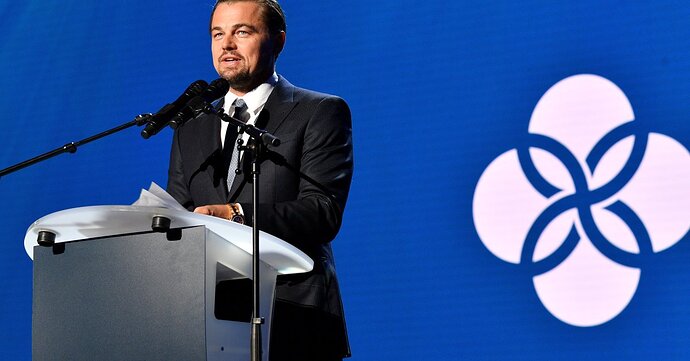 Leonardo DiCaprio Explains What Happened When He Met Donald Trump

Do these people really think they are the silent majority, and that they will ever be accepted by normal people as if they were anything other than dangerous extremists?

he was “working out a Netflix deal” to sell riot video footage.

Aren’t there laws to prevent criminals from profiting from their illegal activities? Wasn’t that part of the buzz about Inventing Anna?

I hope to turn it into movie,” Sandlin wrote in a March 2021 text message. “I plan on having Leonardo DiCaprio play me,” he wrote, adding a smiley face emoji.

I hope it is a documentary about how difficult it is to get proper medication in the prison system, highlighting a prisoner who constantly shits himself uncontrollably.